Formula to extract numbers from a text string

How could I extract only the numbers from a text string in Excel or Google Sheets? For example:

You can do it with capture groups in Google Sheets

Anything which matches the contents of the brackets (a digit) will be copied to the output, anything else replaced by an empty string.

to remove anything which isn't a digit.

Because you asked for Excel also,

If you have a subscription to office 365 Excel then you can use this array formula:

Being an array formula it needs to be confirmed with Ctrl-Shift-Enter instead of Enter when exiting edit mode. If done correctly then Excel will put {} around the formula. 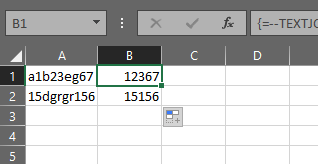 I would imagine there is a way to pull this off with =RegexExtract but I can't figure out how to get it to repeat the search after the first hit. Often with these regex function implementations there is a third parameter to repeat, but it doesn't look like google implemented it.

At any rate, the following formula will do the trick. It's just a little roundabout:

This is converting the string to lower case, then splitting the string using any letter of the alphabet. This will return an array of the numbers left over, which we concatenate back together.

Update, switched over to =REGEXREPLACE() instead of extract...:

That's a much cleaner and obvious way of doing it than that concat(split()) nonsense.

Not the answer you're looking for? Browse other questions tagged excel google-sheets or ask your own question.

564
Stop Excel from automatically converting certain text values to dates
497
How to convert a column number (e.g. 127) into an Excel column (e.g. AA)
227
Return empty cell from formula in Excel
520
Is it possible to force Excel recognize UTF-8 CSV files automatically?
509
'Microsoft.ACE.OLEDB.12.0' provider is not registered on the local machine
567
How to avoid using Select in Excel VBA
514
Conditional formatting based on another cell's value
660
How to use Regular Expressions (Regex) in Microsoft Excel both in-cell and loops
0
how to extract specifc numbers from a text string?