Why are dict lookups always better than list lookups?

I was using a dictionary as a lookup table but I started to wonder if a list would be better for my application -- the amount of entries in my lookup table wasn't that big. I know lists use C arrays under the hood which made me conclude that lookup in a list with just a few items would be better than in a dictionary (accessing a few elements in an array is faster than computing a hash).

I decided to profile the alternatives but the results surprised me. List lookup was only better with a single element! See the following figure (log-log plot): 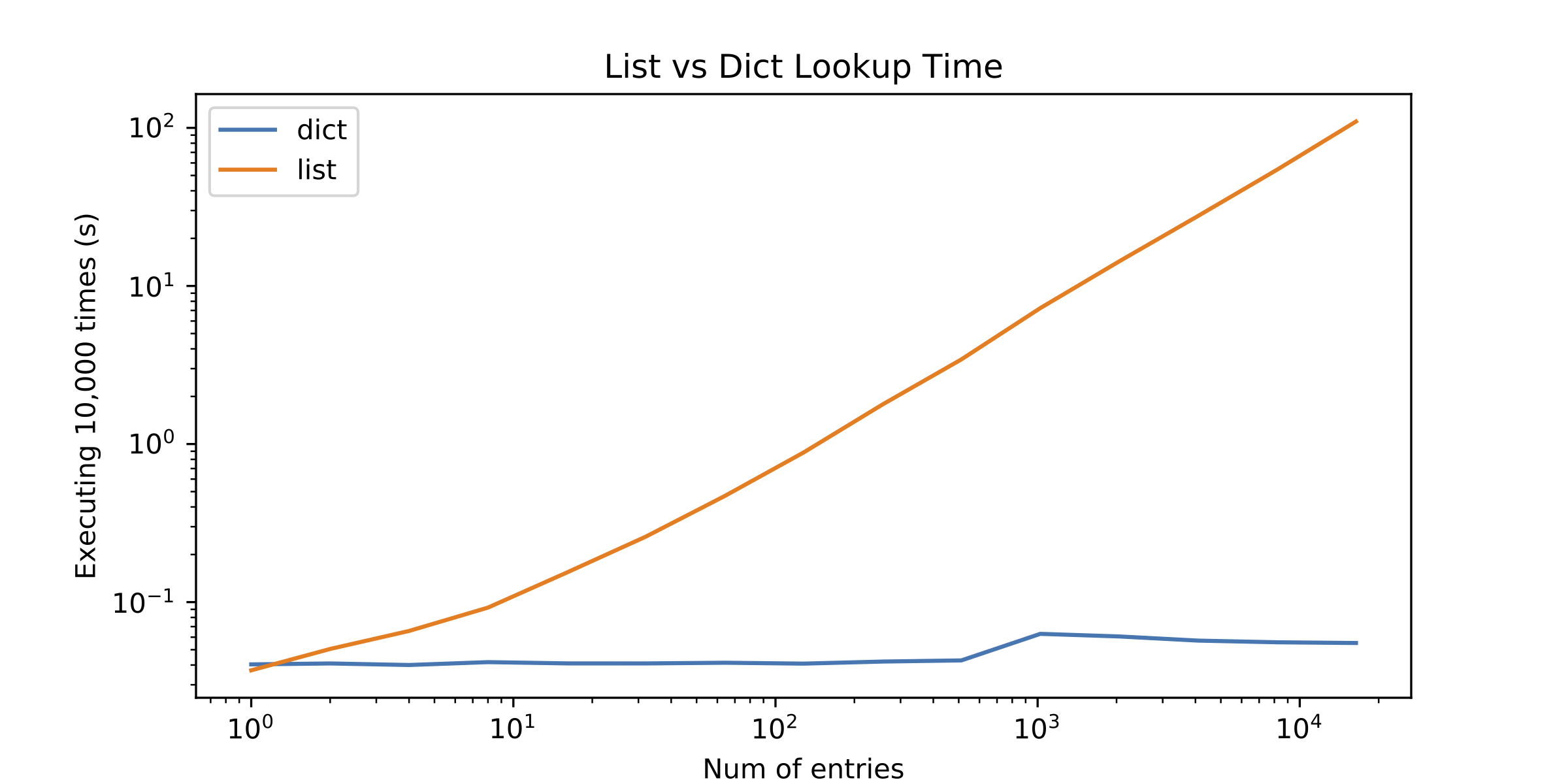 So here comes the question: Why do list lookups perform so poorly? What am I missing? 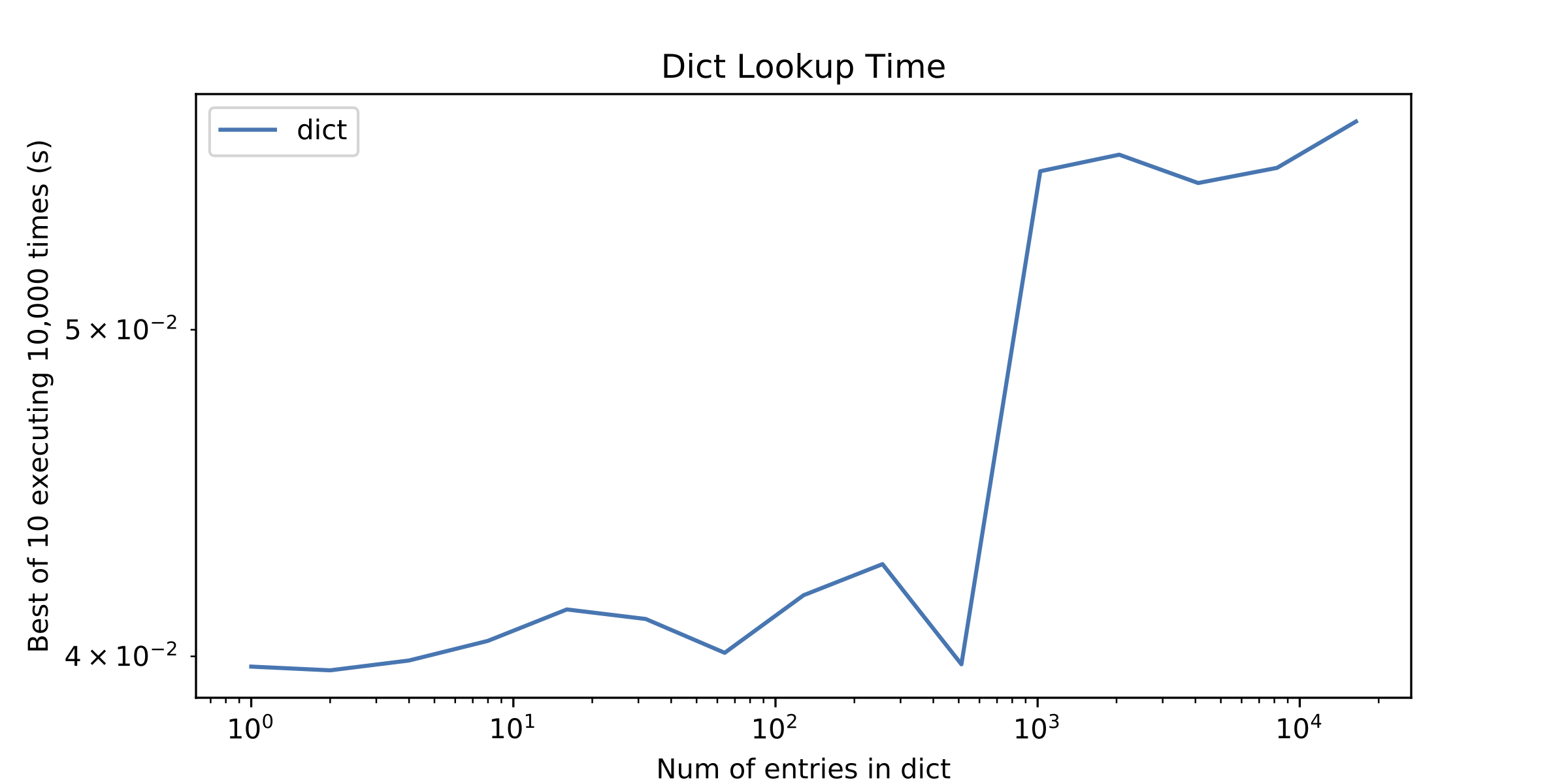 p.s.1 I know about O(n) vs O(1) amortized time for arrays and hash tables, but it is usually the case that for a small number of elements iterating over an array is better than to use a hash table.

p.s.2 Here is the code I used to compare the dict and list lookup times:

I know lists use C arrays under the hood which made me conclude that lookup in a list with just a few items would be better than in a dictionary (accessing a few elements in an array is faster than computing a hash).

Accessing a few array elements is cheap, sure, but computing == is surprisingly heavyweight in Python. See that spike in your second graph? That's the cost of computing == for two ints right there.

Your list lookups need to compute == a lot more than your dict lookups do.

Meanwhile, computing hashes might be a pretty heavyweight operation for a lot of objects, but for all ints involved here, they just hash to themselves. (-1 would hash to -2, and large integers (technically longs) would hash to smaller integers, but that doesn't apply here.)

Dict lookup isn't really that bad in Python, especially when your keys are just a consecutive range of ints. All ints here hash to themselves, and Python uses a custom open addressing scheme instead of chaining, so all your keys end up nearly as contiguous in memory as if you'd used a list (which is to say, the pointers to the keys end up in a contiguous range of PyDictEntrys). The lookup procedure is fast, and in your test cases, it always hits the right key on the first probe.

Okay, back to the spike in graph 2. The spike in the lookup times at 1024 entries in the second graph is because for all smaller sizes, the integers you were looking for were all <= 256, so they all fell within the range of CPython's small integer cache. The reference implementation of Python keeps canonical integer objects for all integers from -5 to 256, inclusive. For these integers, Python was able to use a quick pointer comparison to avoid going through the (surprisingly heavyweight) process of computing ==. For larger integers, the argument to in was no longer the same object as the matching integer in the dict, and Python had to go through the whole == process.

The short answer is that lists use linear search and dicts use amortized O(1) search.

In addition, dict searches can skip an equality test either when 1) hash values don't match or 2) when there is an identity match. Lists only benefit from the identity-implies equality optimization.

Back in 2008, I gave a talk on this subject where you'll find all the details: https://www.youtube.com/watch?v=hYUsssClE94

Roughly the logic for searching lists is:

For dicts the logic is roughly:

Dictionary hash tables are typically between one-third and two-thirds full, so they tend to have few collisions (few trips around the loop shown above) regardless of size. Also, the hash value check prevents needless slow equality checks (the chance of a wasted equality check is about 1 in 2**64).

If your timing focuses on integers, there are some other effects at play as well. That hash of a int is the int itself, so hashing is very fast. Also, it means that if you're storing consecutive integers, there tend to be no collisions at all.

You say "accessing a few elements in an array is faster than computing a hash".

A simple hashing rule for strings might be just a sum (with a modulo in the end). This is a branchless operation that can compare favorably with character comparisons, especially when there is a long match on the prefix.

Not the answer you're looking for? Browse other questions tagged python performance optimization big-o python-internals or ask your own question.

1158
Fastest way to check if a value exists in a list
5
Faster to assign dictionary value to variable, or continually access?

2005
Why is it string.join(list) instead of list.join(string)?
1234
What is a mixin and why is it useful?
3107
How do I clone a list so that it doesn't change unexpectedly after assignment?
2396
Why are elementwise additions much faster in separate loops than in a combined loop?
2102
Why is reading lines from stdin much slower in C++ than Python?
982
Why dict.get(key) instead of dict[key]?
26548
Why is processing a sorted array faster than processing an unsorted array?
2936
Why is printing "B" dramatically slower than printing "#"?
776
Why is [] faster than list()?
913
Why does C++ code for testing the Collatz conjecture run faster than hand-written assembly?