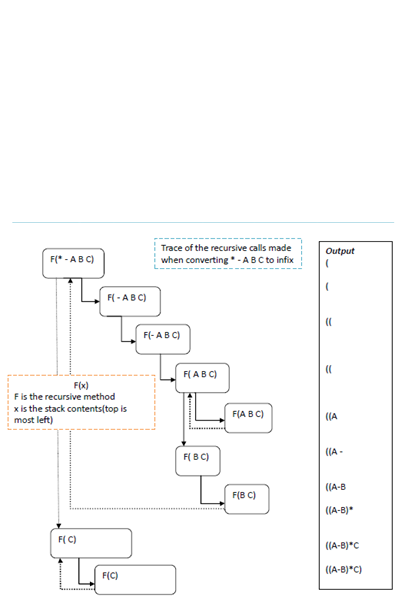 After some google search I find it!

This algorithm is a non-tail recursive method. The reversed input string is completely pushed into a stack.

when the Stack top is

and we enter the algorithm, "A" is written to the output as it was currently the value of

Now how I get '-' on the output column as according to the algorithm the next temp value will be "B" which was popped from the stack after the last recursive call. How the diagram is showing output "((A-" ...

Where I am doing the incorrect assumption ? Could someone take the trouble in explaining it ?

I don't quite understand your question.

If your stack is ABC, F(ABC) pops the A, goes into branch d.i. and writes an A to output, goes on into d.ii. and performs F(BC), which will, in the end, write both the B and C to output.

If you want your output to look like it does on the diagram, you'll need your stack to be * - A B C (note the spaces between every element!).

(As an aside: all this is easier stepped through than described, so I suggest you write the algorithm as a program and start it in your choice of debugger.)

and the remaining stack is

with a space on top and another space between B and C.
So now d.ii. finds the space and doesn't do anything anymore: this control branch is done, and we go back to where we came from, which was d.ii. in your - control branch. You write the - to output at d.iii., call the algorithm with the remaining stack (_B_C) at d.iv., and there you go, writing the B, a ), the * and C and the last ).

Just remember where you came from, so you know where to jump back after your current recursion is done.

Not the answer you're looking for? Browse other questions tagged algorithm recursion stack prefix infix-notation or ask your own question.

1524
What is the best algorithm for overriding GetHashCode?
1151
Ukkonen's suffix tree algorithm in plain English
1742
Image Processing: Algorithm Improvement for 'Coca-Cola Can' Recognition
953
How to find time complexity of an algorithm
9
Convert from an infix expression to postfix (C++) using Stacks
2
Infix to Postfix using stack
0
Infix to Postfix conversion error
1967
What is the optimal algorithm for the game 2048?
0
How To Insert Parenthesis In An Infix Expression Using Stack