How to calculate the trendline for stock price

I am trying to calculate and draw the trendlines for stock prices. I did some searches and thought for a whole day, there is no a really good idea on how to do.

I have daily price history and want to find the cross point between trendline and price line.

Could you provide some ideas or guidances?

Thank you so much!!! 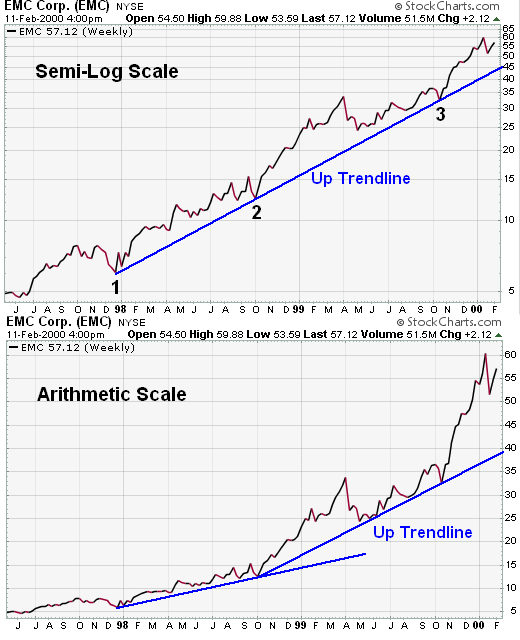 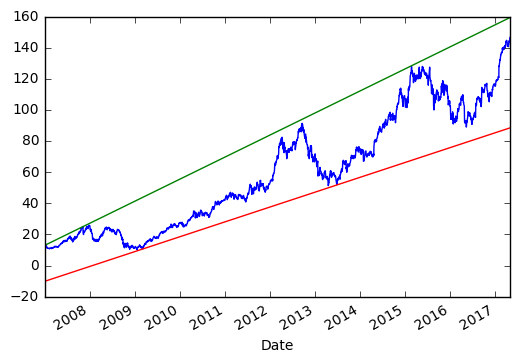 Based on your statement (cit.:)
I did some searches and thought for a whole day, there is no a really good idea on how to do.
I can make you sure, there is no universally good idea, how to solve this, but this should not make you nervous. Generations of CTAs have spent their whole lives on doing this to their individual horizons of the best efforts they could have spent on mastering this, so at least, we can learn on what they have left us as a path to follow.

1) DEFINE a Trend:
As an initial surprise, one ought consider a trend to be rather an exosystem-driven ( extrinsic ) feature, which is more related to an opinion, than to a TimeSeries Data ( observable ) history.

In other words, once one realises, that the information about a trend is simply not present internally in the TimeSeries dataset, the things will start to clear up significantly.

2) given one believes strong enough into her/his Trend-identification methods,
one can but EXTEND such Trend-indication, as a line-of-belief, into FUTURE ( a conjecture )

3) The MARKET & only The Market VALIDATES ( or ignores ) such one's "accepted"-belief.

4) SHARED beliefs RE-CONFIRM such a line-of-belief as a majority respected Trend-indication ( measured by Market risk exposed equity, not by a popular vote, the less by crowd-shouted or CTAs' self-promoting squeeks )

Does it ever work?

The USDCAD example screen above ( zoom-out into a new window for a full-scale indepth view ) reflects all these, plus adds a few instances of FUNDAMENTAL EVENT, that were introduced "across" the technically drafted ( quantitatively supported ) principal attractors, showing a part of a real life of the flow of the river called an FX-trading.

1
Plotly: How to add trendline and parallel lines to time series data?

2656
How do I sort a list of dictionaries by a value of the dictionary?
1767
What's the canonical way to check for type in Python?
2992
How do I print colored text to the terminal?
3090
How do I change the size of figures drawn with Matplotlib?
3681
How do I get the current time?
5033
Accessing the index in 'for' loops
2675
How do I get the last element of a list?
2084
How do I count the occurrences of a list item?
2006
How to check if the string is empty?
2082
Why does the dot notation does not work for deleting a column from a Pandas DataFrame