I am trying to understand at a high level what the differences between R Markdown and R NoteBook. I know they are interrelated but I would like to figure out how they are related. My understanding is this:

I know R Notebooks are really R Markdown documents but I am confused about the terminologies.

RStudio new file option has both R Markdown and R NoteBook and selecting either of them opens an R Markdown file but with minor differences. So just trying to figure out why are there two options and what is the difference between the two? 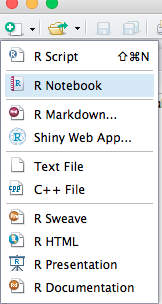 I understand R Notebooks are newly introduced and R Markdown has been there for a while. Part of the confusion could be because I never used R Markdown before R Notebook was introduced so my related or more specific question is

All my hits on web search are pointing that R Notebook uses R Markdown but I did not find any help on what is specifically different between the two.

As far as I understand and from my setup there is no coding difference. The difference is in the rendering. The file extension is the same.

When you make a new R Notebook it adds html_notebook in the output option in the header. That's the difference. You can then preview the rendering quickly without having to knit it. It also refreshes the preview every time you save. However in that preview you don't have the code output (no figures, no tables..) (at least in my setup). Without html_notebook in the output there is no button preview 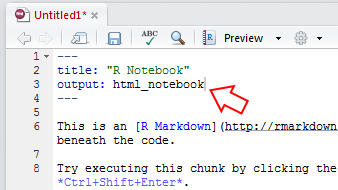 as you can see the Preview options shows up but you can also knit it in any format you want. It will add it to the header code when you do so. 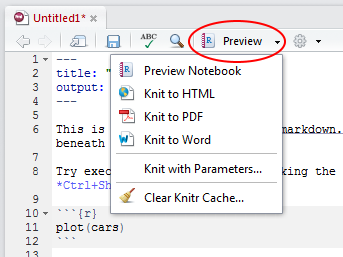 However if you don't have that html_notebook in your header, you can only knit your code to see what it looks like (the entire book) (please ignore the additional default option I put in with the picture) 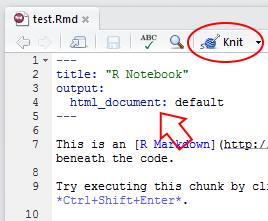 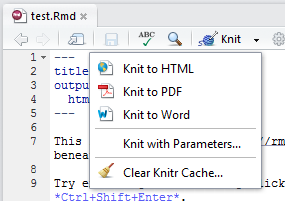 Otherwise it works the same. For some default configuration the output is also hidden by default in the code section.

Note that you can mix several output options in your header so that you can keep the preview and keep your knit options for export.

Recently I found this post which made me clear on the R Markdown vs. R Notebook issue. http://uc-r.github.io/r_notebook

Here are a few relevant lines:

Also there is this on knit vs. preview when you create a R Notebook in RStudio:

The preview shows you a rendered HTML copy of the contents of the editor. Consequently, unlike Knit, Preview does not run any R code chunks. Instead, the output of the chunk when it was last run in the editor is displayed.

Hope you find it useful.

One of the most important differences is not completely clear from the above answers.

There is also a Restart R and Run All Chunks item in the Run menu on the editor toolbar, which gives you a fresh R session prior to running all the chunks. This is similar to the Knit button, which launches a separate R session to compile the document.

In other words, knitting creates a new environment and runs all the code there. By way of contrast, the R Notebook uses the Global Environment as is to render the HTML file. In fact, for an R Notebook, changes to the HTML file happen every time the .Rmd document is saved. The Preview button merely opens the HTML file in its current state. No code is run. Preview literally means what it says: it just shows you what has already been done.

Why does this matter? For example, if an R Notebook .Rmd file is opened, but no code chunks are run, then the HTML file will render all the markdown and input code just fine, but no output will appear. Or, suppose you define some variable x in the Console, but not in a code chunk. If you try to use x somewhere in an R Notebook, it will work just fine. Previewing the HTML document will also work just fine. On the other hand, knitting the document will generate an "unknown variable" error because knitting runs all the code in a new environment, and the variable x was never defined in the markdown file anywhere.

The difference is that in R Notebok you can write Markdown and R-code Chunks and directly execute them and see results right away. It is kind of a Notebook for yourself.

R Markdown is there to create nice looking outputs in html, pdf or a word Document. Combining Markdown and R-Code-Chunks. A short introduction and motivation can be found here.

If you want to get more infos about the the knitr Package klick here.

Here's one practical difference I found :

When you need to comment out a part of text, RMarkdown inserts # in every line of your text, whereas RNotebook neatly encapsulates text between a single pair of <!-- , ---> signs (as in html files)

One may say, what a trivial difference. However, just because of it, I now always use R Notebook (instead of RMarkdown) in RStudio for all my documents. In everything else, they seem the same (for my needs, at least, such as generating html's and pdf's)

Similarites: The R notebook and R Markdown document are pretty much similar. Markdown format works in both file types. Both the file formats can be used for communicating code along with results and commentary to others. One can choose to knit the created document to HTML, PDF and WORD output formats. If there is an error in the code, output will not be generated. To run the file: CTRL+SHIFT+K and to insert code chunk: CTRL+ALT+I.

R Markdown document: The Rmd document can be configured via a wizard and has options for reproducibilty document, presentation slides, shiny app etc and an option to create document from a template. If you change the code, the ouput is executed in the Rmd output. It does not offer the option to Preview the document. The YAML header has output format as: output: html_document

R Notebook Document: The R nb document is launched directly and no wizard (as in the case of .RMD) appears. Along with the notebook file, an additional html file that extension *.nb.html is generated. The notebook has the option for Preview. If any code is altered or edited, the new output is not shown. The output is shown in the code editor itself. Whatever the old output was it is only rendered. No new output is generated from the code change. In order to show the code output, we need to execute the chunk and then it will appear in the output. The YAML header has output as: output: html_notebook

If you have to choose one, go with RMarkdown document as it offers more control and updates documents as soon as you knit it.

The YAML header for the R markdown file will have the line,

Not the answer you're looking for? Browse other questions tagged r rstudio knitr r-markdown rnotebook or ask your own question.

797
What are the differences between “=” and “<-” assignment operators in R?
601
What is the difference between require() and library()?
216
R - Markdown avoiding package loading messages
808
data.table vs dplyr: can one do something well the other can't or does poorly?
59
Difference: “Compile PDF” button in RStudio vs. knit() and knit2pdf()
4
Include images in RStudio notebook with knitr::include_graphics()
3
Output Rmarkdown from R notebook
5
How to add more space between columns of knitr::kable() in RStudio notebooks?