The current algorithm I developed is as follows: 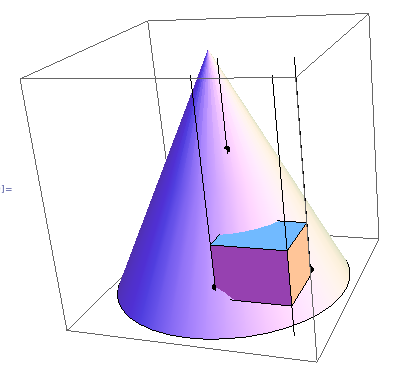 Can anyone think of a more efficient one? This seems to do a lot of extra work by computing each line intersection.

Above algorithm is bad, for example: 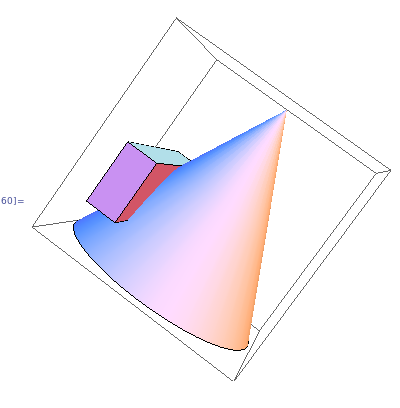 The cone can intersect only one edge of the box in a way that all the axis-line intersections are on one side, so the above algorithm doesn't work unless all edges are tested or the edges to be tested are intelligently chosen (maybe the edges closest to the cone?).

EDIT EDIT: See my own answer below for the solution I later discovered, which seems nearly optimal to me.

I found a possibly optimal solution:

You might start with David Eberly's article "Intersection of a Triangle and a Cone" and see how much of that you can adapt to your situation. (In the worst case, an AABB is made up of 12 triangles, but I expect you can do better than that.)

The link to the David Eberly article from @Gareth Rees is a good one, but if you split everything into triangles, you'll end up checking redundant vertices and edges. I think this will work well:

It may actually be better to swap the order the face and edge checks; I'd expect the face checks to be faster that the edge ones, so you might be able to exit earlier.

There are probably some nice opportunities for SIMD optimizations since the numbers of vertices and edges are both multiples of 4 and the cone is axis-aligned, but that's beyond the scope of this answer :)

I came up with an algorithm to solve the general case of an arbitrary cone and aabb, but it still handles your specific case efficiently.

I described it in another thread: Detect if a cube and a cone intersect each other?

Not the answer you're looking for? Browse other questions tagged 3d geometry collision-detection intersection or ask your own question.

18
Detect if a cube and a cone intersect each other?