Does anyone know of a sanctioned way to update Node within Visual Studio 2017? I've got Node 6 set up on my development PC but VS2017 appears to come with a bundled copy of Node 5, which means that running npm install on my command line sets up various packages like node-sass with bindings for Node 6, so when I then run gulp tasks from the VS Task Runner things fall over due to the mismatched versions.

I found the VS Node install at C:\Program Files (x86)\Microsoft Visual Studio 14.0\Web\External but I'm a little reluctant to just hack about and replace it. Anyone got any experience of upgrading this? I know I can sync by downgrading the version on my PC but that seems backwards.

Then you need to add your Node install directory to the top of the list, like so: 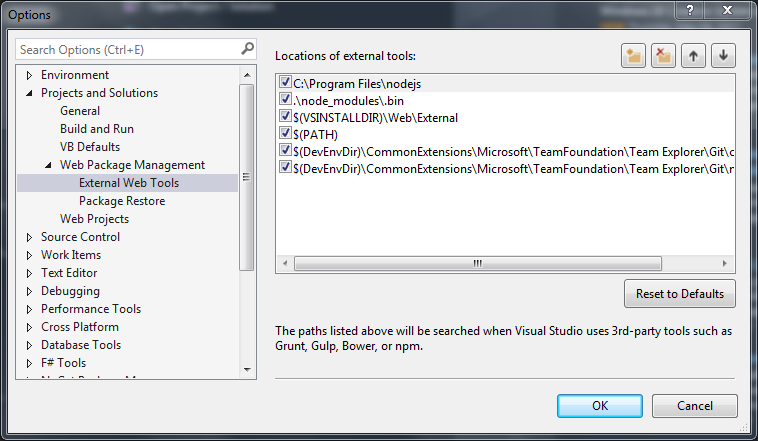 You don't need to add a new Node install directory, Node exists in PATH. Notice how $(PATH) is below the internal path $(DevEnvDir)\Extensions\Microsoft\Web Tools\External.

To use the global PATH environment variable before the internal path, you can just use the arrows at the top-right to change the order.

This is what it looks like when the global PATH is searched before the internal one and therefore will make Visual Studio use your own versions of the tools. 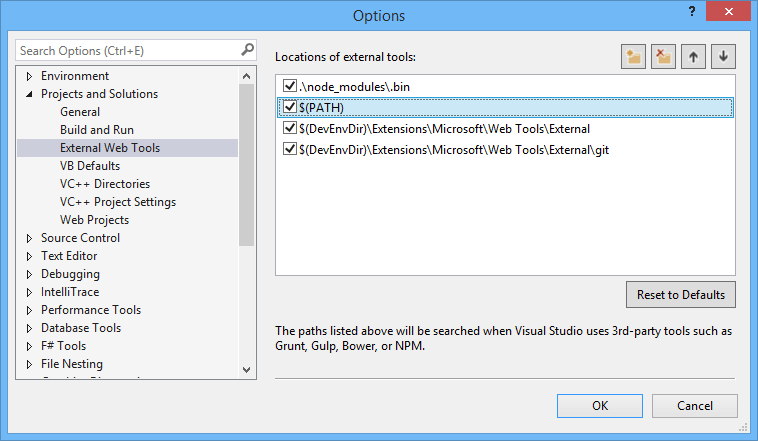 For me, the issue turned out to be that there was a local node.exe file in the same directory that the csproj file was in, along with a node.exe.config file.

I just wanted to add this here in case someone else runs into this same issue.

It looks as if options in

have no effect. However it is possible to set the Node version through

Not the answer you're looking for? Browse other questions tagged node.js visual-studio visual-studio-2017 or ask your own question.