Bare in mind that we do have expertise in both(react and android dev) but we do not want to invest to much time on developing the entire app again.

Are there any tools/resources available to get this done faster if we choose react-native?

Instagram, Tesla, AirBnB, Discord, Bloomberg all have production apps written in React Native. I'll let you decide for yourself whether it's production-ready in your opinion.

The Facebook's philosophy with React Native, instead of write once, run anywhere is rather learn once, write anywhere.

You can definitely use your designs and architecture, but you would need to rewrite most of the code. It might still be more efficient than developing two separate Java and Obj-C/Swift apps, though.

Update: In 2018 Airbnb decided to sunset React Native in their production apps. They wrote an insightful article about their experience and reasoning. It is very relevant for anyone thinking about using React Native. https://medium.com/airbnb-engineering/react-native-at-airbnb-f95aa460be1c

You’ll certainly have to write your components separately for a mobile app and web app. But you can always reuse the business logic, API Communication layer.

Create the reusable component and share it in the Shared folder and reuse Mobile/Web anywhere.

Convert react to the react-native platform is an easy process. A step by step process how to reuse code in react native explain in the image with react native web view as an introduced bride as react-hooks

Step by step guide how to do React vs React Native reusability & what percentage of reusability that we can achieve between react and react native code will explain in the below part.

Setting up a shared project

Make sure you are at the project root folder

Create package.json at the root directory to enable Yarn Workspaces

Now create a common or shared folder where the common code of react and react native will exist.

Change your scripts from react-scripts to react-app-rewired

Configuring react-native on mono repo is a little bit tricky part. We need to understand two things before making workspaces work in our react native app.

symlink is a term for any file that contains a reference to another file or packages. To achieve symlinking we will use wml.

Create the reusable component and share in the Shared folder and reuse Mobile/Web anywhere.

Depends on the following key points

Here I tried for a simple explanation about how to share code between React and react-native with react-native-web. I'll add a detailed process (step by step) guide for convert react native app to web as well here in the coming days. 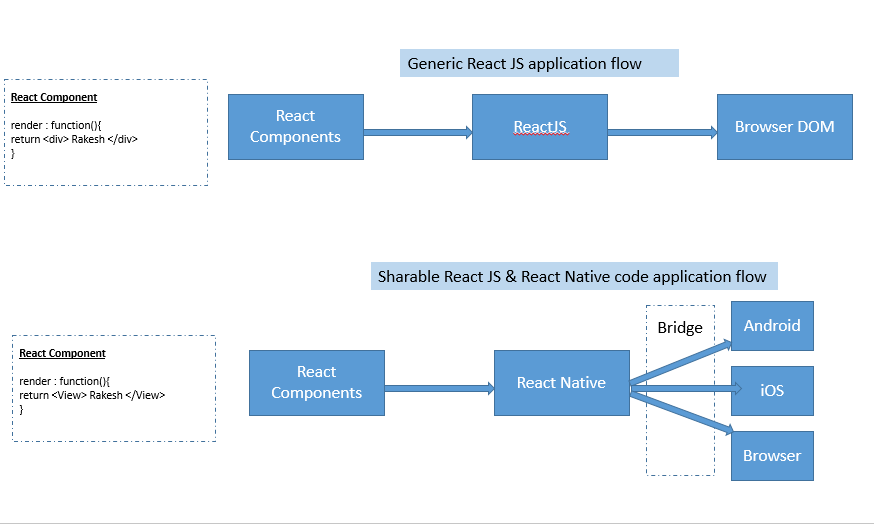 Migration from React to React Native

Conclusion - based on my understanding and depends on the above points, I can say that you can reuse from 20-50% of React JS code to React Native platform

Conclusion - based on my understanding and depends on the above points, I can say that you can reuse from 50-70% of React JS code to React Native platform

You could check out ReactXP (https://microsoft.github.io/reactxp/) which uses reactjs and react native to build cross platform apps.

Rather than bloat this answer too much, I wrote a fairly in-depth guide about this at https://dev.to/kylessg/a-sensible-approach-to-cross-platform-development-with-react-and-react-native-57pk.

To summarise though, you can get great amounts of codesharing between React and React Native but don't overreach on what you're sharing. Doing so may leave your code harder to maintain where you're trying to oversimplify valid differences between mobile and web.

For myself, this is along the lines of:

It can be shared among mobile app and web app. You'll certainly have to write your components again for mobile app. But you can always reuse the business logic.

If you have used React in your web application, then the work becomes even easier. One of the major hazards in React native is State Management. Now the complexity depends upon your application. Usually it is advisable to use Redux along with React Native.

The real question arises is how much code you will be able to share. Hope this helped.

Nowadays there is a tool called react-native-web which lets you share code between web and mobile.

Below is an excellent excerpt from https://microsoft.github.io/reactxp/docs/faq.html highlighting the difference.

How does ReactXP differ from React Native for Web?

ReactXP generally exposes only those props, style attributes, and APIs that are available across all platforms. If you write to ReactXP’s abstraction, you can have high confidence that it will run on all supported platforms in the same manner. The same can be achieved with React Native for Web/iOS/Android, but you need to be more careful about which components, props, and APIs you use.

You can certainly share the storage and the network layer b/w the web and mobile react code base.
Although, in practice you would be only able to share a part of the storage layer, because you might want to fetch data differently in case of a mobile app and a web app.

As of today the philosophy still remains as learn once write everywhere. As stated very correctly in other posts, both react and react-native being JavaScript based, with an architectural design approach you can share your business logic.

On the other hand, because of the nature of the hardwares, it is completely normal to have different presentation layers for web (mostly on your desktop/laptop browsers) and mobile (native).

The question asks for a tool that can speed up the development process. For this purpose this github repo named react-spa-jwt-authentication-boilerplate (*) can be used as an example. It shares the "business logic" between web and native versions via a folder named common-logic by keeping exact copies of *.js files. On the other hand navigation and presentation layer differs. It implements a sample authentication process which itself can also be used as a baseline for new projects.

(*) Disclimer: I am the implementer of the repo. We needed to implement the repo for the exact same need of reducing development time between mobile and web applications.

Yes we can reuse the code. And it works really well. Here is a sample application repository https://github.com/spoman007/reactXstarter

you can do that by turning stuff like code, hooks, props and even design-tokens into shared components: