I've been trying to run my code in AWS Lambda which imports pandas. So here is what I've done. I have a python file which contains a simple code as follows(This file has the lambda handler)

But when I test the lambda function in AWS Lambda, I get the below error:

I already have numpy in the zipped package but still I get this error. I tried to follow the hints given at Pandas & AWS Lambda but no luck.

Did anyone ran into the same issue. Would appreciate any hint or suggestions to solve this problem.

EDIT: I figured out finally how to run pandas & numpy in a AWS Lambda python 3.6 runtime environment.

I have uploaded my deployment package to the following repo:

Simply add your lambda_function.py to the zip file by running:

Upload to S3 and source to lambda.

The only way I have gotten Pandas to work in a lambda function is by compiling the pandas (and numpy) libraries in an AWS Linux EC2 instance following the steps from this blog post and then using the python 2.7 runtime for my lambda function.

To include numpy in your lambda zip follow the instructions on this page in the AWS docs...

How do I add Python packages with compiled binaries to my deployment package and make the package compatible with AWS Lambda?

To paraphrase the instructions using numpy as an example:

When the wheel file is uncompressed, your deployment package will be compatible with Lambda.

Hope that all makes sense ;)

The end result might look something like this. Note: you should not include the whl file in the deployment package.

After doing a lot of research I was able to make it work with Lambda layers.

Create or open a clean directory and follow the steps below:

Prerequisites: Make sure you have Docker up and running

Selecting the layer from the console

Thanks to this medium article https://medium.com/@qtangs/creating-new-aws-lambda-layer-for-python-pandas-library-348b126e9f3e

AWS Lambda use Amazon Linux operating system. Idea is download Pandas and NumPy compatible with Amazon Linux. What you download using pip is specific to Windows or Mac. You need to download the compatible version for Linux, so that your Lambda function can understand it. These files are called wheel files.

Navigate to https://pypi.org/project/pandas/#files. Search for and download newest *manylinux1_x86_64.whl package. In my case, I'm using Python 3.6 on my Lambda function, so I downloaded the following:

Upload the zip.zip file in your Lambda function. 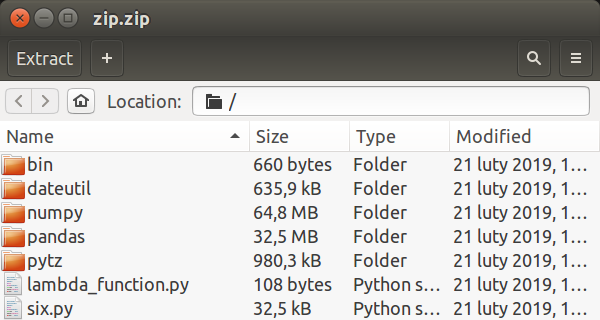 To get additional libraries in Lambda we need to compile them on Amazon Linux (this is important if the underlying library is based on C or C++ like for Numpy) and package them in a ZIP file together with the python script you want to run in Lambda.

To get the Amazon Linux compiled version of the libraries. You can either find a version that someone already compiled, like the one by @pbegle, or compile it yourself. To compile it ourself there are two options: - compile the libraries on an EC2 instance https://streetdatascience.com/2016/11/24/using-numpy-and-pandas-on-aws-lambda/ - compile the libraries on a docker version of Lambda environment https://serverlesscode.com/post/scikitlearn-with-amazon-linux-container/

Following the last option with Docker, it is possible to make it work using the instructions in the blog post above and by adding:

in the script to compile the libraries:

You need to package your libraries with Lambda. As lambda runs on a public cloud, you cannot configure it.

Now in your case, as you are using pandas, you need to package Pandas with your zip. Get a path to pandas(for example: /Users/dummyUser/anaconda/lib/python3.6/site-packages) and copy the library to the place where you have your lambda function code. Inside your code, refer to pandas from your local copy. While uploading, zip the whole set(code + libraries), and upload as you will. It should work.

The main problem is that libraries compiled within a specific OS will only work for that OS. So, if a library is compiled within macOS then it will not run in Linux environment. Why is this a problem?

One of the dependencies of Pandas is Numpy (which is compiled due to speed, see this answer on stackoverflow). AWS Lambda uses Linux hence if the Numpy compilation is done within macOS or windows, then the compilation will only be good for those specific architectures and will not work within AWS. I think those using Linux will not experience this problem.

To solve this problem and create a working AWS Lambda layer for Pandas, follow these simple steps (see the general steps on amazon forum):

Then download the latest precompiled packages for Pandas and Numpy into the awsPandasLayer directory earlier created. For my case, since I am using Python 3.7, I downloaded these versions of Pandas and Numpy. Notice cp37 denotes the python version as clearly stated on the site. Then complete the installation as follows:

The zip file can then be uploaded as an AWS Lambda layer and it should work. Note that I am using macOS.

I tried some of the solution here but most of them didn't work. I liked the idea @Ranadeep Guha suggested of creating a container and downloading the repos over there so that's what I did.

I worked in the dir my lambda function was located on and created the following files :

requirements.txt : (those were mine)

Now in my gitbash I run the following command that will generate a docker image for me with all the dependencies installed :

Now just create a Docker container of that image and confirm that everything installed :

type ls and you will see all the installs.

Now let's copy all the installs to your local pc. You can replace the dot with any location on your pc:

I've been struggling with a similar error while trying to use the python3.6 engine. When I switched to 2.7 it worked fine for me. I used Amazon AMI to create my zip file, but it has only python3.5, not 3.6. I guess the version mismatch was the reason. But it's just a guess, I haven't tried the process on a python3.6 installation yet.

with the serverless framework, you can easily package and deploy your dependencies correctly.

you only need to;

once the deployment is finished, go to the AWS console look for the function numpy-test-dev-numpy and test your function.

this article explains the necessary steps in detail.

This is similar to Randeep's answer but you don't need to use Lambda Layers if you don't want to do that.

To solve this, you can use docker to download/build your dependencies and package them up on Amazon Linux. Amazon provides a Docker image for this purpose. See below for how I built my python package for Python 3.6 runtime (they have other dockers for all other runtimes):

Put all of your dependencies into a requirements.txt file, for example:

Create a script (i.e. named build.sh) that will build your package, here is what mine looked like:

Ensure you have the Amazon Linux lambda build image pulled:

Run your build script inside of the docker container:

You should now see a file named lambda_package.zip that was built on Amazon Linux you can upload to AWS.

Maybe module you're using is for python 2.7.

Or for instant result, Change your runtime to python 2.7 (not recommended)

To make a deployment package that's compatible with Lambda, download a precompiled package called a wheel (.whl). Uncompress the wheel file on /path/to/project-dir instead of using pip install.

When the wheel file is uncompressed, your deployment package will be compatible with Lambda.

Your code always give this error
because lambda does not contain any external library it having a library which by default come with Python.

if you are using any external library like pandas, numpy or any other. you need to install that library on Aws Lambda
before using it

here no installation of pandas library so your code is not working.
my suggestion is use your code as follows. write all you code inside the lambda function

So final code look as follows

Not the answer you're looking for? Browse other questions tagged python pandas numpy amazon-s3 aws-lambda or ask your own question.

1345
Selecting multiple columns in a Pandas dataframe
2168
Renaming columns in Pandas
1597
Delete column from pandas DataFrame
934
Relative imports for the billionth time
2646
How to iterate over rows in a DataFrame in Pandas
1134
Get list from pandas DataFrame column headers
103
AWS Lambda import module error in python
7
AWS Lambda and Numpy Libraries - Importing the multiarray numpy extension module failed
1
how to import numpy and pandas inside aws lambda function?