How would you approach adding a splash screen to Flutter apps? It should load and display before any other content. Currently, there is a brief flash of color before the Scaffold(home:X) widget loads.

I want to shed some more light on the actual way of doing a Splash screen in Flutter.

I followed a little bit the trace here and I saw that things aren't looking so bad about the Splash Screen in Flutter.

The only thing that the developer needs to do is to put the Branding image in the right place and the splash screen will start working just like that.

Here is how you can do it step by step:

First on Android (because is my favorite Platform :) )

By default in the android folder there isn't a drawable-mdpi, drawable-hdpi, etc., but we can create them if we want. Because of that fact the images need to be placed in the mipmap folders. Also the default XML code about the Splash screen (in Android) is going to use @mipmap, instead of @drawable resource (you can change it if you want).

Please pay attention that we comment the XML code for the white background and uncomment the code about the mipmap image. If somebody is interested the file launch_background.xml is used in styles.xml file.

That should be all you need, next time when you run your app, on Android or iOS you should have the right Splash Screen with the branding image which you added.

The easiest way to add a splash screen in flutter is imho this package: https://pub.dev/packages/flutter_native_splash

Installation guide (by the author of the package):

Add your settings to your project's pubspec.yaml file or create a file in your root project folder named flutter_native_splash.yaml with your settings.

image must be a png file.

You can use # in color as well. color: "#42a5f5" You can also set android or ios to false if you don't want to create a splash screen for a specific platform.

In case your image should use all available screen (width and height) you can use fill property.

Note: fill property is not yet implemented for iOS splash screens.

If you want to disable full screen splash screen on Android you can use android_disable_fullscreen property.

After adding your settings, run the package with

Flutter actually gives a simpler way to add Splash Screen to our application. We first need to design a basic page as we design other app screens. You need to make it a StatefulWidget since the state of this will change in a few seconds.

Logic Inside the initState(), call a Timer() with the duration, as you wish, I made it 3 seconds, once done push the navigator to Home Screen of our application.

Note: The application should show the splash screen only once, the user should not go back to it again on back button press. For this, we use Navigator.pushReplacement(), It will move to a new screen and remove the previous screen from the navigation history stack.

For a better understanding, visit Flutter: Design your own Splash Screen

There isn't a good example of this yet, but you can do it yourself using the native tools for each platform:

Now uncomment this and replace @mipmap/launch_image, with your image location.

You can change the colour of your screen here -

persons who are getting the error like image not found after applying the verified answer make sure that you are adding @mipmap/ic_launcher instead of @mipmap/ ic_launcher.png

This is the error free and best way to add dynamic splash screen in Flutter.

Both @Collin Jackson and @Sniper are right. You can follow these steps to set up launch images in android and iOS respectively. Then in your MyApp(), in your initState(), you can use Future.delayed to set up a timer or call any api. Until the response is returned from the Future, your launch icons will be shown and then as the response come, you can move to the screen you want to go to after the splash screen. You can see this link : Flutter Splash Screen

You should try below code, worked for me

Multiple ways you could do this, but the easiest one which I use is:

For Launch Icons I use the flutter library Flutter Launcher Icon

For the Custom Splash Screen I create different Screen resolutions and then add the splash images in the mipmap folder as per the resolution for Android.

The last part is adjusting the launch_background.xml in the drawable folder in res folder in Android.

Few devs I have seen add the splash as drawable, I tried this but somehow the build fails in Flutter 1.0.0 and Dart SDK 2.0+. Therefore I prefer to add the splash in bitmap section.

iOS Splash-screen creation is rather simpler.

Just an addition I feel its good to have a 4x image as well in the LaunchImage.imageset. Just update your code in Content.json with following lines, below 3x scale to add a 4x scale option:

Here are the steps for configuring the splash screen in both IOS and Android platforms for your Flutter app.

All apps submitted to the Apple App Store must use an Xcode storyboard to provide the app’s launch screen. Let’s do this in 3 steps:-

Step 1: Open ios/Runner.xcworkspace from the root of your app directory.

Step 2: Select Runner/Assets.xcassets from the Project Navigator and drag your launch images of all sizes (2x, 3x, etc.). You can also generate different sizes of images from https://appicon.co/#image-sets

Step 3: You can see the LaunchScreen.storyboard file is showing the provided image, here you can also change the position of the image by simply dragging the image. For more information please see official documentation https://developer.apple.com/design/human-interface-guidelines/ios/visual-design/launch-screen/ 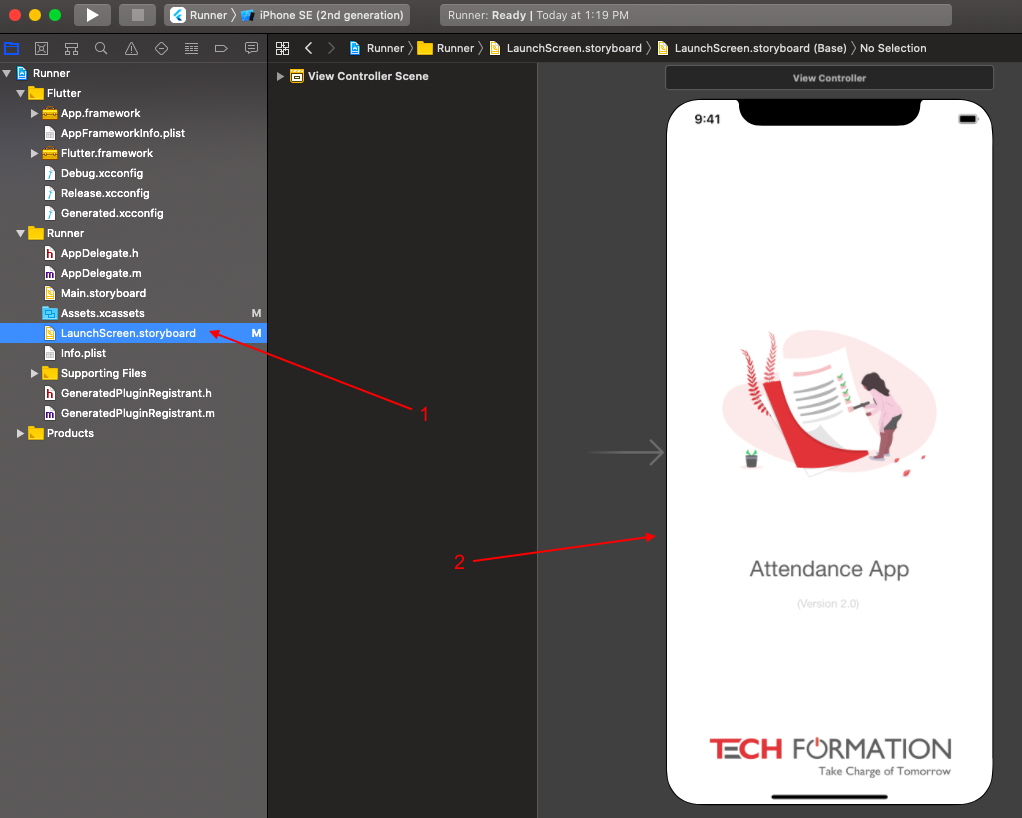 Step 2: At line number 4 you can select the desired colour:-

That's all, you are done! Happy Coding :)

In case you want a secondary splash screen (after the native one), here is a simple example that works:

Flutter provides you the ability to have a splash screen by default but there are a lot of plugins that can do the job. If you don't want to use a plugin for the task and you're worried that adding a new plugin might affect your app size. Then you can do it like this.

Open launch_background.xml then you can put in the splash screen image, or gradient color you want. This is the first thing your user sees when they open your app.

Open your app using Xcode, Click on Runner > Assest.xcassets > LaunchImage, You can add the image here. If you want to edit what position launch screen image should take or look like you can edit it on LaunchScreen.storyboard.

The code from Jaldhi Bhatt doesn't works for me.

Flutter throws a 'Navigator operation requested with a context that does not include a Navigator.'

You can make design of flutter splash screen same as other screens. The only change is use of timer. So you can display splash screen for specific amount of time.

For Android
app -> src -> main -> res ->drawble->launch_background.xml and uncomment the commented block like this

is there any one face any error after coding like this
Use sync with system in android studio or invalidate cache and reset.This solved my problem In flutter debug mode take some time take for splash screen .After build it will reduce like native android

Flutter.dev already gives the best answer for it, that is not a bug neither a problem, just config. Just take time read and everything will be solved. Have a nice day everyone.

You can create it two ways

For Android, go to this path,

default code is for white colour background screen. like this, 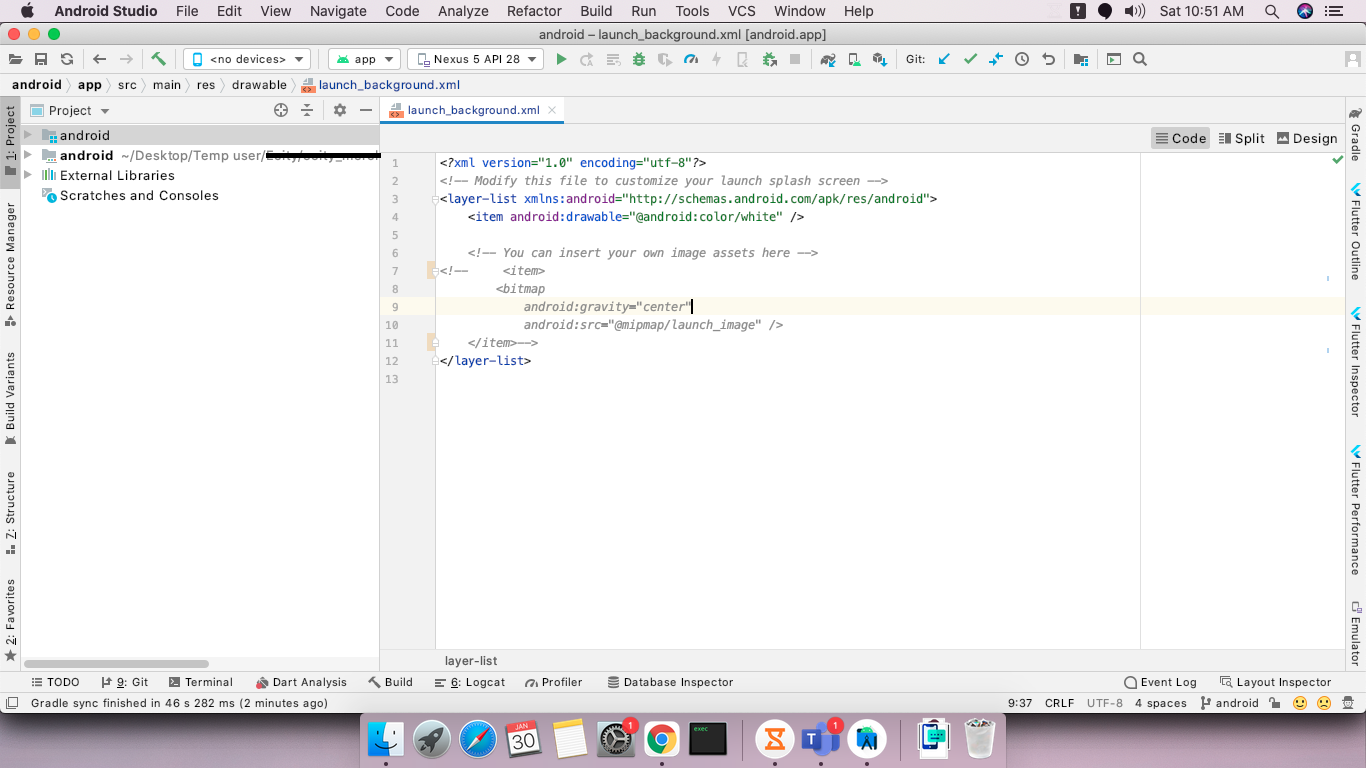 You can changes its color or modify this by adding icon or any custom design. for more customisation detail checkout this for android.

by default its colour is white, you can customise or change colour this by your requirement, for more customisation check out this Ios. 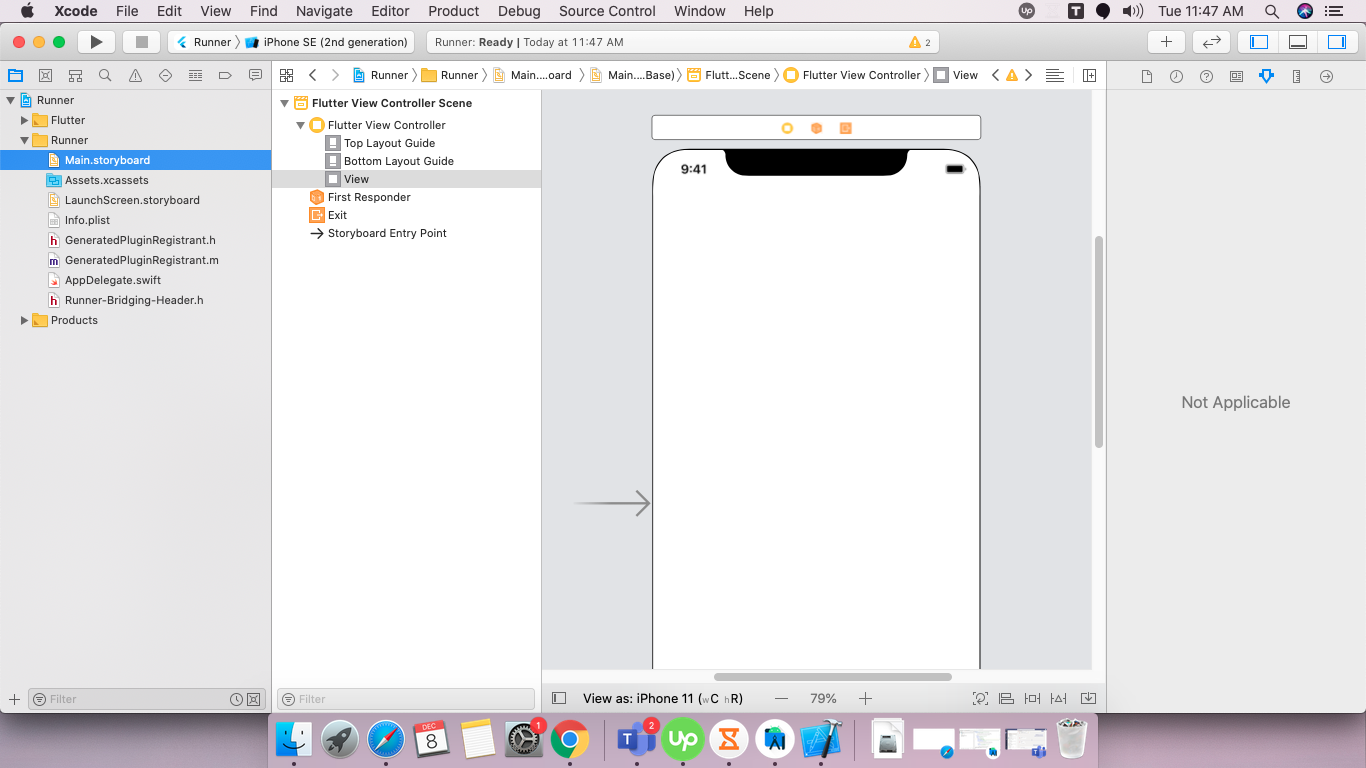 Not the answer you're looking for? Browse other questions tagged flutter dart splash-screen flutter-widget or ask your own question.

114
How To fix white screen on app Start up?
205
Yellow lines under Text Widgets in Flutter?
188
Passing data to StatefulWidget and accessing it in it's state in Flutter
5
Splash Screen in flutter web
4
How to create a gradient color background for splash screen in Flutter?
0
How can i set the duration in flutter splash screen dynamically?