As per the following link document: Java HashMap Implementation

I'm confused with the implementation of HashMap (or rather, an enhancement in HashMap). My queries are:

Why and how are these constants used? I want some clear examples for this. How they are achieving a performance gain with this?

If you see the source code of HashMap in JDK, you will find the following static inner class:

How is it used? I just want an explanation of the algorithm.

HashMap contains a certain number of buckets. It uses hashCode to determine which bucket to put these into. For simplicity's sake imagine it as a modulus.

If our hashCode function is good, it should provide an even distribution so that all the buckets will be used somewhat equally. In this case, the bucket uses a linked list to store the values.

But you can't rely on people to implement good hash functions. People will often write poor hash functions which will result in a non-even distribution. It's also possible that we could just get unlucky with our inputs.

The implementation of HashMap tries to mitigate this by organising some buckets into trees rather than linked lists if the buckets become too large. This is what TREEIFY_THRESHOLD = 8 is for. If a bucket contains more than eight items, it should become a tree. 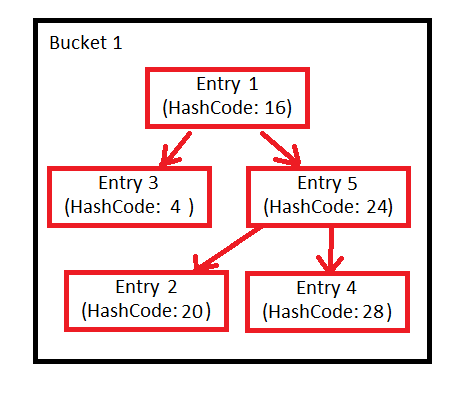 This tree is a Red-Black tree, presumably chosen because it offers some worst-case guarantees. It is first sorted by hash code. If the hash codes are the same, it uses the compareTo method of Comparable if the objects implement that interface, else the identity hash code.

If entries are removed from the map, the number of entries in the bucket might reduce such that this tree structure is no longer necessary. That's what the UNTREEIFY_THRESHOLD = 6 is for. If the number of elements in a bucket drops below six, we might as well go back to using a linked list.

Finally, there is the MIN_TREEIFY_CAPACITY = 64.

When a hash map grows in size, it automatically resizes itself to have more buckets. If we have a small HashMap, the likelihood of us getting very full buckets is quite high, because we don't have that many different buckets to put stuff into. It's much better to have a bigger HashMap, with more buckets that are less full. This constant basically says not to start making buckets into trees if our HashMap is very small - it should resize to be larger first instead.

It is designed to protect against bad hashCode implementations and also provides basic protection against collision attacks, where a bad actor may attempt to slow down a system by deliberately selecting inputs which occupy the same buckets.

To put it simpler (as much as I could simpler) + some more details.

These properties depend on a lot of internal things that would be very cool to understand - before moving to them directly.

TREEIFY_THRESHOLD -> when a single bucket reaches this (and the total number exceeds MIN_TREEIFY_CAPACITY), it is transformed into a perfectly balanced red/black tree node. Why? Because of search speed. Think about it in a different way:

it would take at most 32 steps to search for an Entry within a bucket/bin with Integer.MAX_VALUE entries.

Some intro for the next topic. Why is the number of bins/buckets always a power of two? At least two reasons: faster than modulo operation and modulo on negative numbers will be negative. And you can't put an Entry into a "negative" bucket:

Instead there is a nice trick used instead of modulo:

That is semantically the same as modulo operation. It will keep the lower bits. This has an interesting consequence when you do:

In the case above, the decision of where an entry goes is taken based on the last 4 bits only of you hashcode.

So you have 16 buckets - last 4 bits of the hashcode decide where an entry goes. You double the buckets: 32 buckets - 5 last bits decide where entry will go.

As such this process is called re-hashing. This might get slow. That is (for people who care) as HashMap is "joked" as: fast, fast, fast, slooow. There are other implementations - search pauseless hashmap...

Now UNTREEIFY_THRESHOLD comes into play after re-hashing. At that point, some entries might move from this bins to others (they add one more bit to the (n-1)&hash computation - and as such might move to other buckets) and it might reach this UNTREEIFY_THRESHOLD. At this point it does not pay off to keep the bin as red-black tree node, but as a LinkedList instead, like

MIN_TREEIFY_CAPACITY is the minimum number of buckets before a certain bucket is transformed into a Tree.

TreeNode is an alternative way to store the entries that belong to a single bin of the HashMap. In older implementations the entries of a bin were stored in a linked list. In Java 8, if the number of entries in a bin passed a threshold (TREEIFY_THRESHOLD), they are stored in a tree structure instead of the original linked list. This is an optimization.

You would need to visualize it: say there is a Class Key with only hashCode() function overridden to always return same value

and then somewhere else, I am inserting 9 entries into a HashMap with all keys being instances of this class. e.g.

The change in HashMap implementation was was added with JEP-180. The purpose was to:

Improve the performance of java.util.HashMap under high hash-collision conditions by using balanced trees rather than linked lists to store map entries. Implement the same improvement in the LinkedHashMap class

However pure performance is not the only gain. It will also prevent HashDoS attack, in case a hash map is used to store user input, because the red-black tree that is used to store data in the bucket has worst case insertion complexity in O(log n). The tree is used after a certain criteria is met - see Eugene's answer.

To understand the internal implementation of hashmap, you need to understand the hashing. Hashing in its simplest form, is a way to assigning a unique code for any variable/object after applying any formula/algorithm on its properties.

Not the answer you're looking for? Browse other questions tagged java dictionary java-8 hashmap or ask your own question.

16
When and how does HashMap convert the bucket from linked list to Red Black Trees?
5
Understanding treeifying in Java HashMap
1
When HashMap will use TreeSet as a bucket?
0
How the tree created in Java8 HashMap when the entries cross the saturation level
0
How java HashMap works internally?
4181
What are the differences between a HashMap and a Hashtable in Java?
5
HashMap has backing array, then why is it unordered
5
Ordering for key value pairs
4
why hashmap resize based on total size instead of filled buckets
1
Map.ofEntries gives Null Pointer Exception on checking NULL key using containsKey()
See more linked questions

4181
What are the differences between a HashMap and a Hashtable in Java?
7491
Is Java "pass-by-reference" or "pass-by-value"?
3809
How do I efficiently iterate over each entry in a Java Map?
4311
Avoiding NullPointerException in Java
4552
How do I read / convert an InputStream into a String in Java?
3483
When to use LinkedList over ArrayList in Java?
3947
How do I generate random integers within a specific range in Java?
3610
How can I create a memory leak in Java?
1471
How to directly initialize a HashMap (in a literal way)?