How to change the application launcher icon on Flutter?

When I create an app with a flutter create command, the flutter logo is used as an application icon for both platforms.

Or is it possible to define an image as a Flutter Asset and the icons are generated somehow?.

Flutter Launcher Icons has been designed to help quickly generate launcher icons for both Android and iOS: https://pub.dartlang.org/packages/flutter_launcher_icons

Video showing how to run the tool can be found here.

If anyone wants to suggest improvements / report bugs, please add it as an issue on the GitHub project.

Update: As of Wednesday 24th January 2018, you should be able to create new icons without overriding the old existing launcher icons in your Flutter project.

I was having some trouble using and understanding the flutter_launcher_icons package. This answer is how you would do it if you were creating an app for Android or iOS natively. It is pretty fast and easy once you have done it a few times.

Android launcher icons have both a foreground and a background layer. 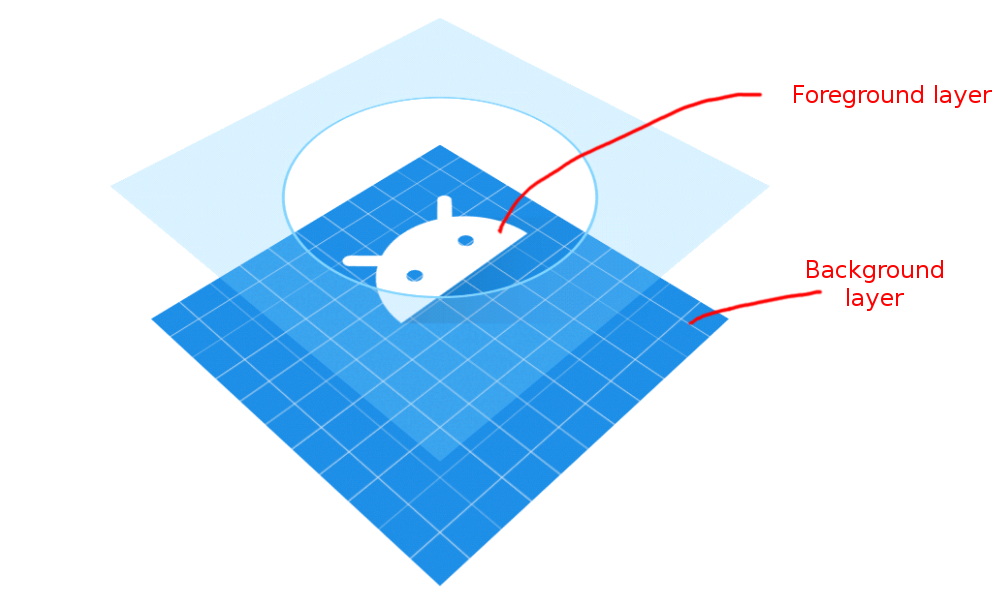 The easiest way to create launcher icons for Android is to use the Asset Studio that is available right in Android Studio. You don't even have to leave your Flutter project. (VS Code users, you might consider using Android Studio just for this step. It's really very convenient and it doesn't hurt to be familiar with another IDE.)

Right click on the android folder in the project outline. Go to New > Image Asset. (Try right clicking the android/app folder if you don't see Image Asset as an option. Also see the comments below for more suggestions.) Now you can select an image to create your launcher icon from. 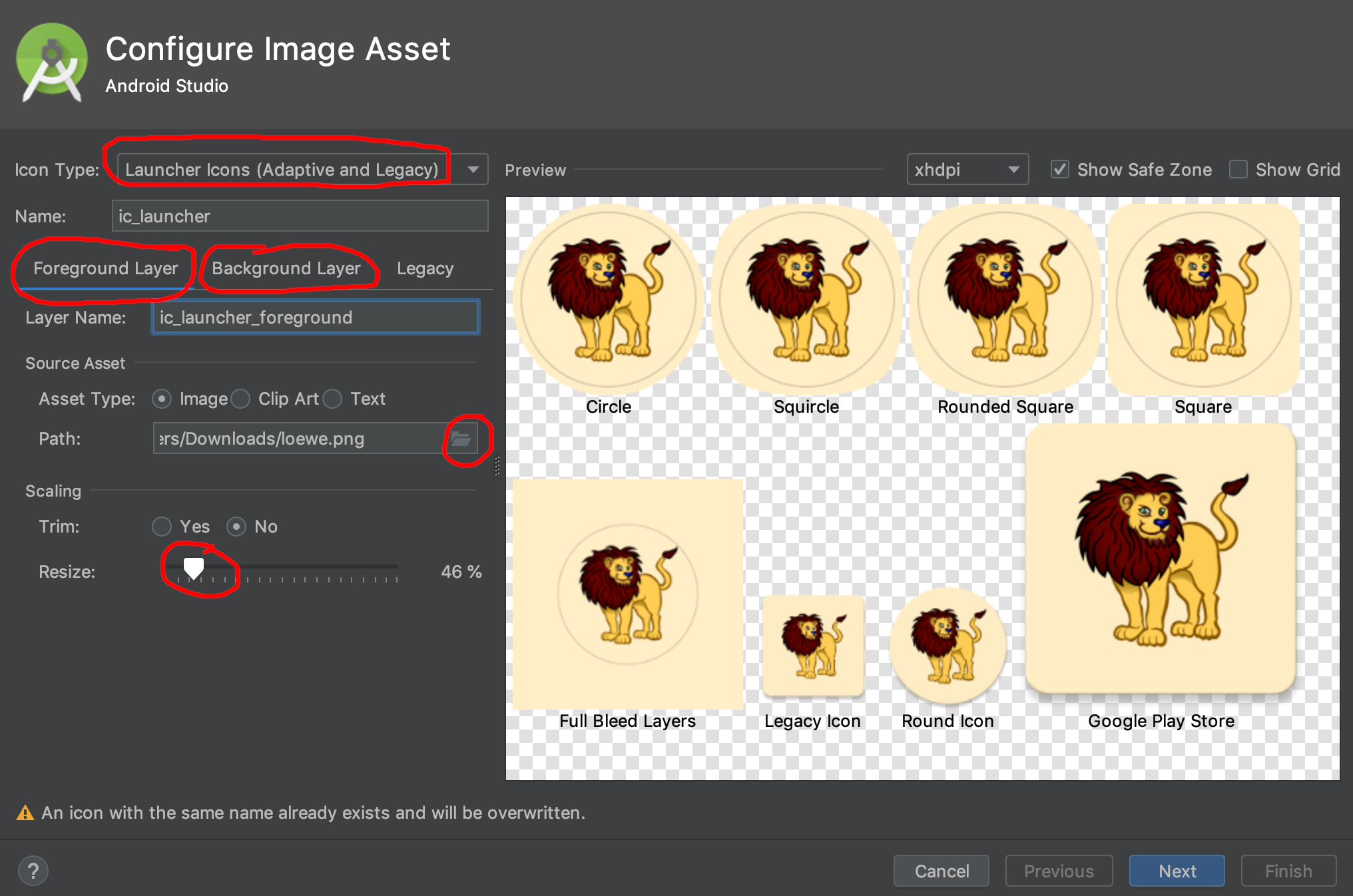 This will replace the current launcher icons. You can find the generated icons in the mipmap folders: 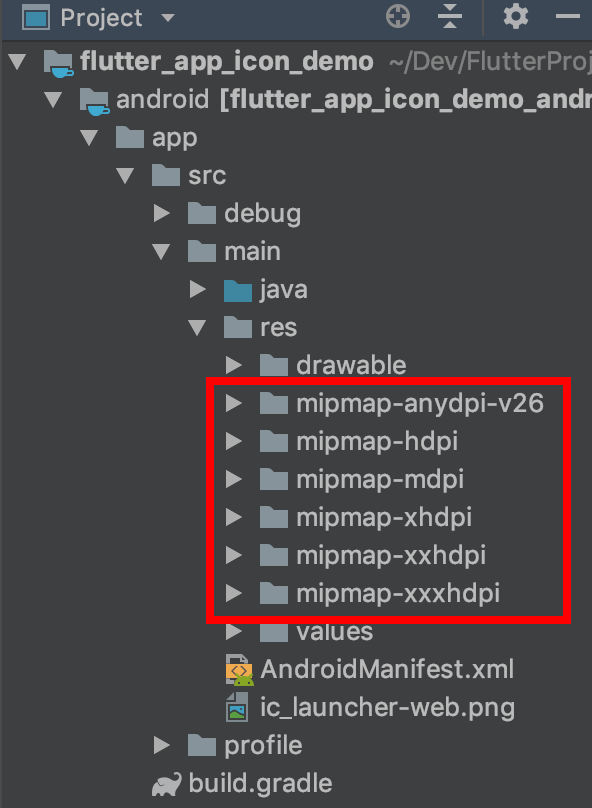 If you would prefer to create the launcher icons manually, see this answer for help.

Finally, make sure that the launcher icon name in the AndroidManifest is the same as what you called it above (ic_launcher by default):

Run the app in the emulator to confirm that the launcher icon was created successfully.

I always used to individually resize my iOS icons by hand, but if you have a Mac, there is a free app in the Mac App Store called Icon Set Creator. You give it an image (of at least 1024x1024 pixels) and it will spit out all the sizes that you need (plus the Contents.json file). Thanks to this answer for the suggestion.

iOS icons should not have any transparency. See more guidelines here.

After you have created the icon set, start Xcode (assuming you have a Mac) and use it to open the ios folder in your Flutter project. Then go to Runner > Assets.xcassets and delete the AppIcon item.

After that right-click and choose Import.... Choose the icon set that you just created.

That's it. Confirm that the icon was created by running the app in the simulator.

You can still create all of the images by hand. In your Flutter project go to ios/Runner/Assets.xcassets/AppIcon.appiconset. 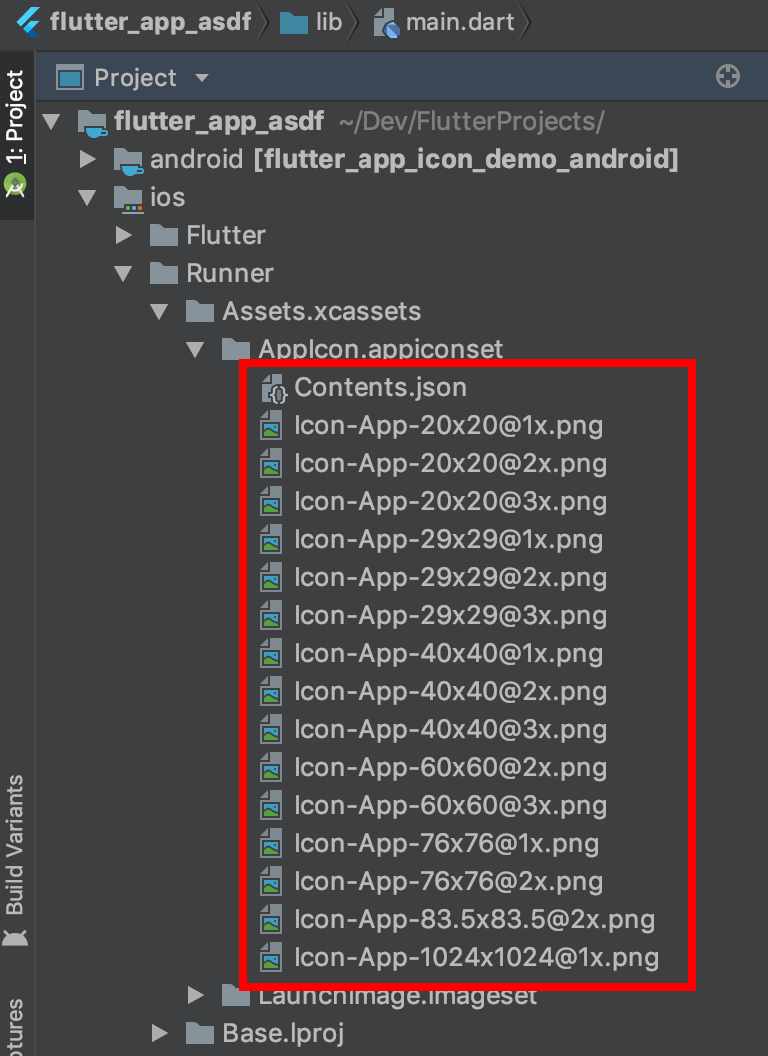 The image sizes that you need are the multiplied sizes in the filename. For example, Icon-App-29x29@3x.png would be 29 times 3, that is, 87 pixels square. You either need to keep the same icon names or edit the JSON file.

2. Prepare an app icon for the specified path. e.g. icon/icon.png

3. Execute command on the terminal to Create app icons:

The community has written some articles and packages you might find useful. These articles address flavors for both iOS and Android.

I have changed it in the following steps:

1) please add this dependency on your pubspec.yaml page

2) you have to upload an image/icon on your project which you want to see as a launcher icon. (i have created a folder name:image in my project then upload the logo.png in the image folder). Now you have to add the below codes and paste your image path on image_path: in pubspec.yaml page.

3) Go to terminal and execute this command:

4) After executing the command then enter below command:

N.B: (of course add an updated dependency from

You have to replace the Flutter icon files with images of your own. This site will help you turn your png into launcher icons of various sizes:

I would suggest You to use this website Linked Below

Step-3: Extract the Downloaded Zip File In the respective folder

Save the file and run flutter pub get on terminal.

Flutter has its own default icon for every app in its Android and Ios folder so there are few steps that I would like to show to change the app icon.

The flutter_launcher_icons package recommended in many answers above hasn't been updated for quite some time now and is throwing an uncaught exception.

You can use the package icons_launcher instead though.

Best way is to change launcher icons separately for both iOS and Android.

Change the icons in iOS and Android module separately. The plugin produces different size icons from the same icon which are distorted.

Try IconKitchen, the successor to the Android Asset Studio, and a great new way to make highly customizable app icons for Android, iOS, and the web.

1. Add dependencies of flutter_luncher_icons in pubspec.yaml file.You can find this plugin from here.

2. Add your required images in asstes folder and pubspec.yaml file as below .

Add this in your pubspec.yaml file

after adding this run the below command

I use few methods for chaging flutter app lancher icon but only the manuall method is a bit easy and good. Because you will know how it work.

So to change flutter ios icon. First get copy of your icon 1024×1024 pixel and generate set of icons for android and ios using appicon.co generator. When you get zip file it work create two folder ios and android open ios folder and copy folder and replace the one in your ios/runner directory.

For android copy all folder present in android folder and replace the ones present in the android/app/src/main/res/drawable here.

After replacing folder on both ios and android stop the app and re run and your icons will be changed.

379
Android - Launcher Icon Size
245
iOS how to set app icon and launch images
33
Flutter Launcher icon not getting changed?
16
Failed to handle method call on local notification
18
Can I use Android 8.0 Adaptive Icons for a Flutter app?
6
How to access "Configure Image Asset"
2
How to set custom image icon on Flutter App? Using Appicon
2
How to duplicate my own created flutter project with new one
2
changing Launcher icon flutter error
0
Change App Logo in Flutter with png or jpeg?
See more linked questions

692
How can I remove the debug banner in Flutter?
438
How to change package name in flutter?
3
Why my flutter app launcher icon in a circle? Can I use a square icon to replace this one?
190
FlutterError: Unable to load asset
1
Is it possible to change the app icon while the App is running
1
Why I am getting app icon error while build IOS flutter app?
0
Flutter doesn't update launcher icon
2
App launcher icon and background state icon are different - Flutter App