Google API: Not a valid origin for the client: url has not been whitelisted for client ID "ID"

I'm working with the google API (Youtube data API) and I use the example code from the google side the code it works I'm pretty sure about that. I got an error when i try to start the Script:

details: "Not a valid origin for the client: "MyURL" has not been whitelisted for client ID "MyID". Please go to https://console.developers.google.com/ and whitelist this origin for your project's client ID."

The problem i whitelisted my Website and it's accepted. i don't know what is wrong. What should i do to "whitelist" my Domain (It's whitelisted)

And another question. I did not search for an answer on this question before.

I think it's possible that I can use the code on Localhost, I think I must whitelist my localhost address or something like this. But whitelisting does not work.

I cleared cache. Started working then.

Had the same problem and here's how I solved it:

Clearing the cache did the trick for me

Try Clearing cache it could be issue with cache/localstorage.

For me, it worked without adding any of the additional APIs like google analytics. Just make sure to add the complete clientid and open the app in incognito window to avoid saving the cache. If already have opened the app in regular window, 1- Close all tabs that app is open at. 2- Clear the cache and cookies. In chrome, its in Settings --> Passwords and forms -> Clear Browsing data -> Advanced (tab) -> select a) Cookies and other site data and b) Cached images and files 3- Open a fresh incognito window and test your app.

I also followed the instructions in the quickstart example, Had the same problem, tried all the solutions suggested here to no avail, tried everything I could imagine but it didn't help.

Finally saw that I copied the CLIENT_ID with a space at the end.

Once I fixed this (removed the extra space) it worked.

I guess the error message is not very precise in this case. Hope this helps.

I just made the same mistake: Tried the official quickstart example and received the same error message as you.

It is rather confusing, because that example is a lot more complex than what I personally needed: It uses OAuth for user login, and NOT just the API key. If you are like me, and you don't want to use OAuth, and you only want to retrieve some Youtube data, without any privileged actions (e.g. if you only want to search or list videos, channels or playlists), this example is for you.

The solution is simple, just provide apiKey instead of clientId to gapi.client.init (link: API docs), like so:

I was also attempting to get the sample working (from ) https://developers.google.com/drive/api/v3/quickstart/js

It continually failed even though the ip address was added to the WebAPI. 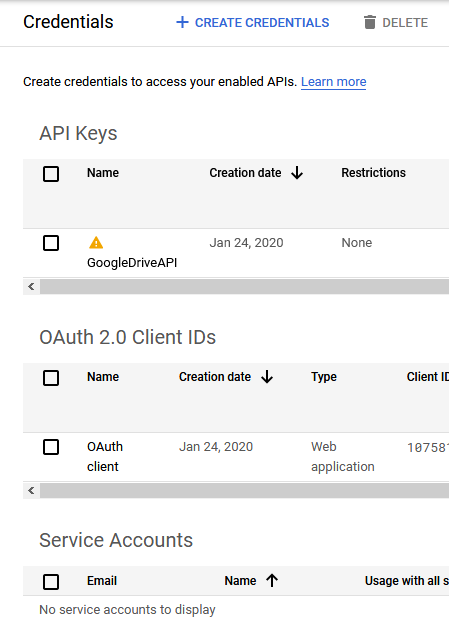 Here's the interesting / odd thing. When I ping localhost I see:

I think that is IPV6 thing.

Maybe that is a red herring but I wasn't sure if the value entered in the OAUTH was affected by it or not.

The reason I even noticed that is because when I started the Python web server as directed in the tutorial I saw the following and thought it was odd:

As many have indicated here, this is just a browser caching issue. No need to create a new key, or even clear the cache. Just try again on a new browser incognito (anonymous) window and it should work fine.

Use the below latest way to update the valid origin for the client:

Hopefully, this will help everyone

I was having a similar issue trying to get a login for my web app. What I did was just recreate the OAuth Client ID credentials from Cloud Platform. When I did this and used the new Client ID, everything worked fine. Not sure what the issue was before, but it goes through perfectly fine now.

If anyone finds this from Google or whatnot, try that. It might just work. It would explain Ezra Obiwale's answer because that is essentially creating a new Client ID just after adding a couple API's.

If anyone knows an explanation as to why this happens that would be appreciated.

summary for this question it says:

add all your domains and sub domains in: https://console.developers.google.com/apis/credentials Edit or create a:

add the domains and subs here:

after this the one tap login started to be shown with the accounts registered on the chrome browser of the logged user.

Script must in tag <head></head>

I was having this exact same issue - the solution for me was to go into the API Manager and enable the Analytics API. Not sure what the issue was, but this seems to have fixed it!

I believe this has to do with caching, try to Go to your browser and clear the cache, try: in chrome, > setting > advanced > clear browsing data :>: cached images and files.

One of the reasons why it could not work is exceeded number (100) of logins on certain client ID.

You can visit google API console page and create new Oauth2 client credentials (remember to add your applications URL under Authorized Javascript Origins) and then use it.

I was having the same issues as well until I realized when I copied the client_ID, there was white space in my file, so I removed the white space from the string and everything is working great now.

I faced the same issue while working with google sign-in using react-social-login on my localhost. In the whitelist origin we will have to provide http://localhost:3000 to make it work.

The following worked for me

Not the answer you're looking for? Browse other questions tagged google-api youtube-data-api whitelist or ask your own question.

45
idpiframe_initialization_failed in Google Sign In from Localhost
3
How can I configure my localhost to request data from Youtube APIs?