get info from streaming radio

There is some standard way to ask a streaming radio service about the currently playing song? I currently do it in a different way for each station, e.g. (SomaFM):

... but I wonder if there is maybe a more standard way to do it, not relying on downloading html pages that are bound to change sooner or later

streaming audio-streaming internet-radio
Share
Improve this question
asked May 18 '17 at 14:15

For SHOUTcast/Icecast style stations with ICY metadata (which make up the bulk of internet radio stations), the best thing to do is get this data from the stream itself.

Internet radio stations typically include multiple servers here for failover. If the listener gets disconnected from one, the player will usually roll to the next item. This is also useful when one server reaches its listener limit... the player will (hopefully) eventually hit another server that's active.

Anyway, fire up a copy of Wireshark or some other packet sniffer. Hit one of the URLs in your audio player, and inspect the traffic. The first thing we'll look at is the request and response.

These internet radio servers are either HTTP (in the case of Icecast and others) or really close to it (legacy SHOUTcast), and accept normal GET requests. In this case, my player (VLC) makes a GET request for /secretagent-128-aac, which is the path to the actual stream.

This Icy-MetaData header asks the server to mux metadata with the audio stream data. That is, the "now playing" track information is going to be sent periodically injected into the stream.

In the server response headers, there's another key header:

This tells us two things... the first is that the server agreed to send metadata. The second is that the metadata interval is 45,000 bytes. Every 45,000 bytes, the server will inject a chunk of metadata. Let's go back to our packet sniffer, and see what this looks like: 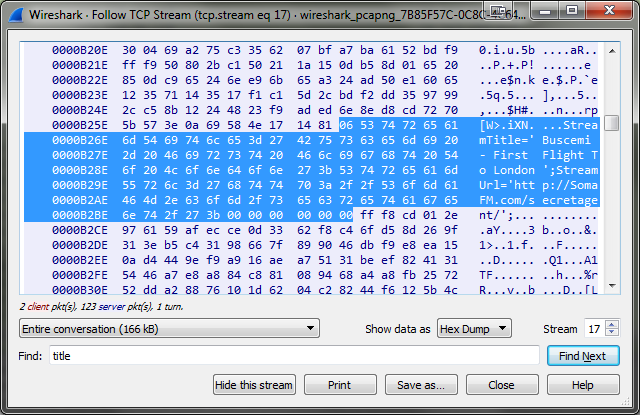 Now, let's get into the actual text metadata format:

It's looks pretty straightforward. key='value', semicolon ; delimited. There are some big catches with this though. For example... there's no truly standard method for escaping the single quote. If the metadata value needs to contain a single quote, sometimes it's \', sometimes it's '''. Sometimes it's not escaped at all!

Additionally, not all servers use the same character encoding. You can probably safely assume UTF-8, but do expect that some servers might be different, or just simply broken in their own metadata encoding.

Anyway, now that you know how all of this works, you can implement. If you'd like, I have some code you can license. One is a Node.js API server which when given a stream URL will return the metadata for you, doing all the buffering and parsing server-side. The other is a client-side player based on MSE... note though that this only works with servers that support CORS, and as far as I know, only my own servers (AudioPump CDN) do that today. If you're interested in any of this code, feel free to e-mail me at brad@audiopump.co. If you have questions about my answer here on Stack Overflow, post a comment here.

Not the answer you're looking for? Browse other questions tagged streaming audio-streaming internet-radio or ask your own question.