With .NET Core, I have read that it is intended for cross-platform use too, so if I choose a .NET Core library it seems that I can use it on many platforms too, just like .NET Standard.

I will try to further clarify your doubts and extend Jon Skeet answer.

This simplified diagram may help to understand this relationship: 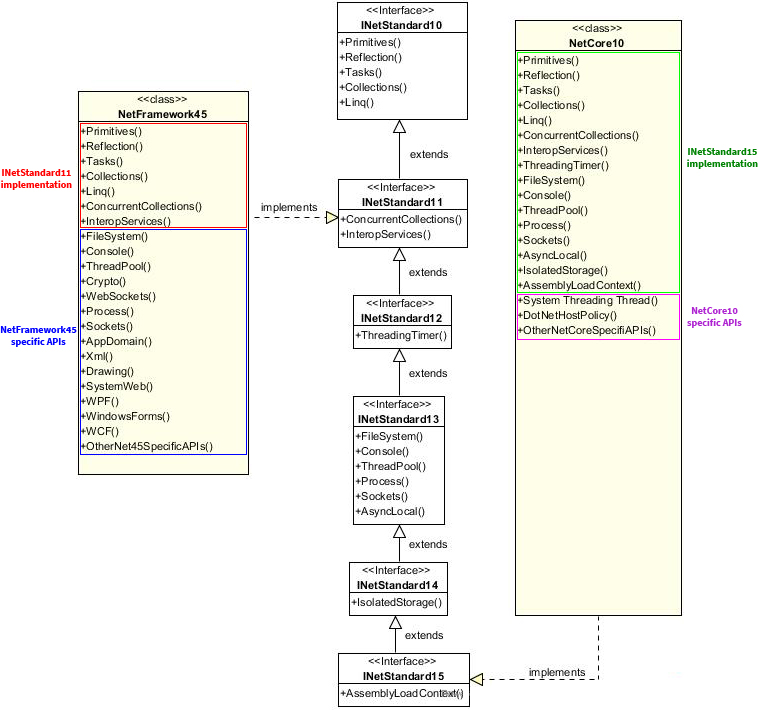 Anything targetting NetCore10 has access to INetStandard15 APIs and NetCore10 specific APIs (such as DotNetHostPolicy).

Of course this library cannot be used in different INetStandard15 implementations (NetCore10 is not convertible to NetFramework462 or Mono46).

If you, instead, need access only to INetStandard15 APIs (and target that specification instead of a concrete framework) your library may be used by any framework which implements it (NetCore10, NetFramework462, etc.)

Note: in the original analogy David Fowler used interfaces for both .NET Standard versions and frameworks implementations. I believe that using interfaces and classes is, instead, more intuitive and better represents the relationship between specifications and concrete implementations.

So if you create a .NET Core library, it will have access to things that are implemented in .NET Core, but aren't part of .NET Standard, and your library won't be compatible with other implementations of .NET Standard, such as Xamarin, Tizen, full .NET desktop framework etc. 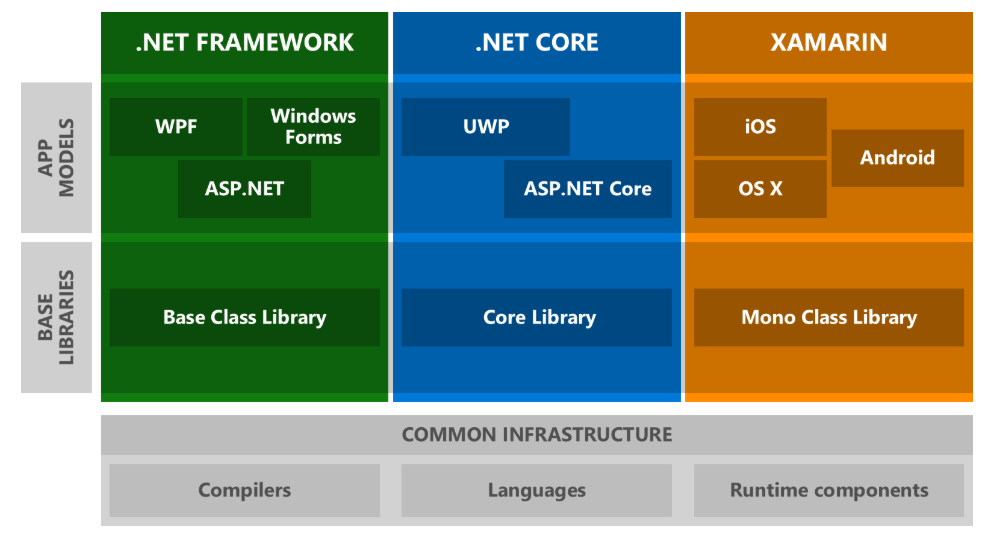 Federicos answer gives you a graphical overview of how each framework evolve with versions. Take a look at below diagram from Microsoft Docs.

Targeting .NET Standard increases your platform support whereas targeting a particular .NET platform such as .NET Core (or .NET Framework) will allow you to use all the platform features for that platform.

.NET Core Class library is basically a subset of .NET Framework library, which just contains fewer APIs. Sticking to .NET Core Class library makes it difficult to share code between runtimes. This code might not work for a different runtime (Mono for Xamarin), because it doesn't have the API that you need. To solve this there is .NET Standard, which is just set of specification that tells you which APIs you can use. The main purpose of .NET Standard is to share code between runtimes. And it's important that this specification is implemented by all runtimes. (.NET Framework, .NET Core and Mono for Xamarin).

So if you are sure that you will use your library only for .NET Core projects, you can ignore .NET Standard, but if there is even a tiny chance that your code will be used by .NET Framework or Mono for Xamarin then it's better to stick to .NET Standard

PS: Also if you want to convert your library to .NET Standard, the .NET Portability Analyzer could help you with that.

.NET Standard is a specification of APIs that all .NET implementations must provide. It brings consistency to the .NET family and enables you to build libraries you can use from any .NET implementation. It replaces PCLs for building shared components.

.NET Core is an implementation of the .NET Standard that’s optimized for building console applications, Web apps and cloud services using ASP.NET Core. Its SDK comes with a powerful tooling that in addition to Visual Studio development supports a full command line-based development workflow. You can learn more about them at aka.ms/netstandardfaq and aka.ms/netcore.

The above, together with a very clear explanation of most of the stuff discussed in this question can be found in the following extremely helpful article by Microsoft (MSDN - September 2017): .NET Standard - Demystifying .NET Core and .NET Standard

In simple terms, .NET standard is used for writing class library projects which compiles to dll. .NET Core can be used for developing actual web applications which can run on all operating systems (Windows, Linux, MacOS). (In .NET Core 3 Microsoft has provide the functionality to develop desktop apps using WPF, but uptil now these apps will not be cross platform and will only run on windows system. In future Microsoft might make them cross-platform too) .NET standard libraries/dlls can be used in any application which uses .NET (.NET framework, .NET Core) which means that you can use .NET standard with both .NET framework and .NET core.

I love .NET Core because we can host it on Linux (use nginx in my experience). It's different than .NET framework which is you can only host on IIS. You can consider about hosting budget in this case (Because windows server is expensive for me).

In the development environment perspective, .Net core is lightweight. So, you can use VSCode, Sublime, for IDE (not only visual studio).

Not the answer you're looking for? Browse other questions tagged .net .net-core .net-standard or ask your own question.

2
.net standard is cross platform like .net Core?
16
Is .NET Core an “Implementation” of .NET Standard?
9
Dotnet Core vs DotNetStandard
7
I can use EF Core 2.0 in production applications?
2
WIndows universal app with system.drawing and possible alternative
-6
What is the difference between .net Core multi target and .net Standard?
2
I cant send email from gmail with smtp
-1
Easiest way to expose a Framework 4.7.2 library as a Web API

859
ASP.NET Web Site or ASP.NET Web Application?
519
What does the Visual Studio “Any CPU” target mean?
2176
Difference between decimal, float and double in .NET?
536
What 'additional configuration' is necessary to reference a .NET 2.0 mixed mode assembly in a .NET 4.0 project?
1503
Why not inherit from List<T>?
398
What's the difference between .NET Core, .NET Framework, and Xamarin?
904
What is the difference between .NET Core and .NET Standard Class Library project types?
72
Convert .NET Core 2.0 class libraries to .NET Standard
173
Is ConfigurationManager.AppSettings available in .NET Core 2.0?