I've been investigating how to add (and later remove) a user from an Azure AD group using the Microsoft Graph API (the dotnet/C# library available on nuget).

Ignoring all else around getting a connected GraphServiceClient etc. I'm trying code very similar to the sample below, not getting any exception (suggesting things are fine) but when I get the group once again via the API, it's not got any members still! 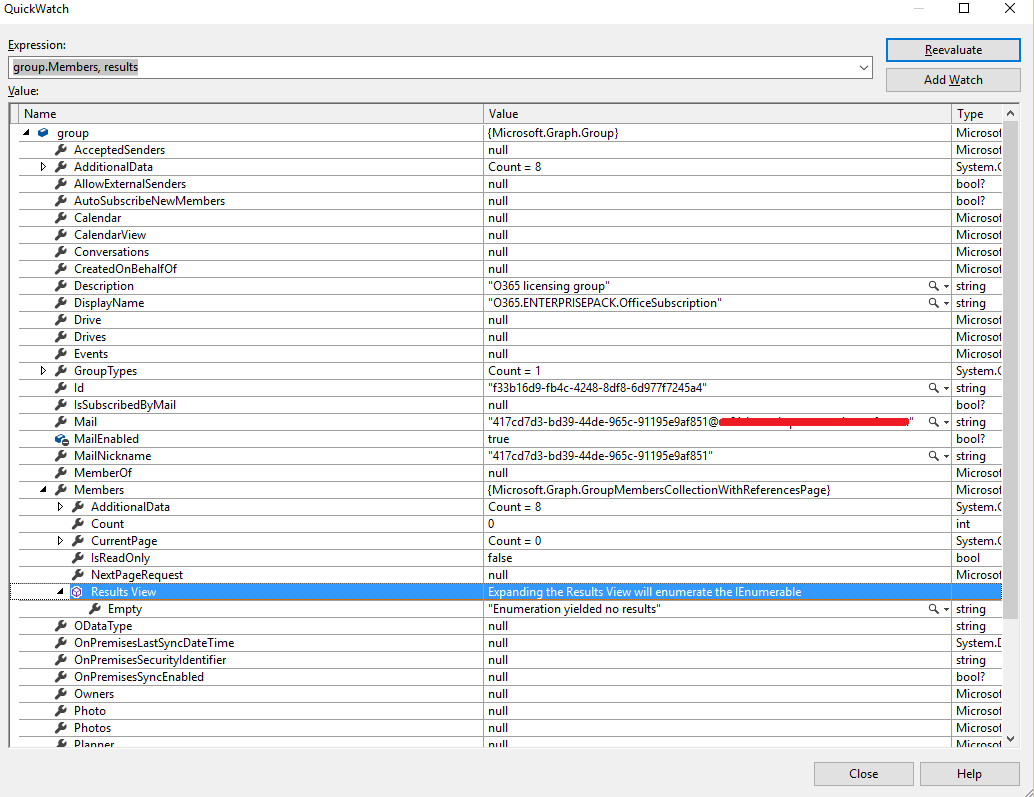 Interestingly (as an aside), when I ask for memberOf property on the user object and tell it to expand it, it comes back null still.

Does anyone know what I'm doing wrong here? The docs I used to come up with this code were based on the links to the following documents:

Adding a member to a group

Also, I tried to style the approach on the solution suggested here to setting licenses for users:

As usual, thanks for any help.

I've also tried poking around in the graph API looking at potentially updating the .Members property/resource rather than the group itself:

But it only has the GetAync() method available to it.

Updated based on answer

I've added the code snippet above based on the answer, as I think it succinctly answers the issue regarding adding members.

Thanks to Nan Yu for the answer.

To add user to Group ,you could use :

To get members of a group :

Get groups the current user is a direct member of ,you could try :

Not the answer you're looking for? Browse other questions tagged c# api azure microsoft-graph-api or ask your own question.

0
How to add a user to a group in the contacts of office 365, programmatically with Microsoft Graph ? my code only created the group, without members
1
Assign user to group, Azure AD Graph Api

1033
Group By Multiple Columns
1122
Group by in LINQ
0
MS Graph API GET Group members only get users
3
Microsoft Graph SDK - Login
0
How to add a user to a group in the contacts of office 365, programmatically with Microsoft Graph ? my code only created the group, without members
7
Get Users in Group from Azure AD via Microsoft Graph
5
How to filter group members in Microsoft graph API?
2
Permissions to add member to group via Graph API
0
Adding a user to Azure AD group via graph api