This setup should be based on a proxmox, being behind a opnsense VM hosted on the Proxmox itself which will protect proxmox, offer a firewall, a privat LAN and DHCP/DNS to the VMs and offer a IPsec connection into the LAN to access all VMs/Proxmox which are not NATed. The server is the typical Hetzner Server, so only on NIC but multiple IPs or/subnets on this NIC.

To better outline the setup, i create this drawing: (not sure its perfect, tell me what to improve) 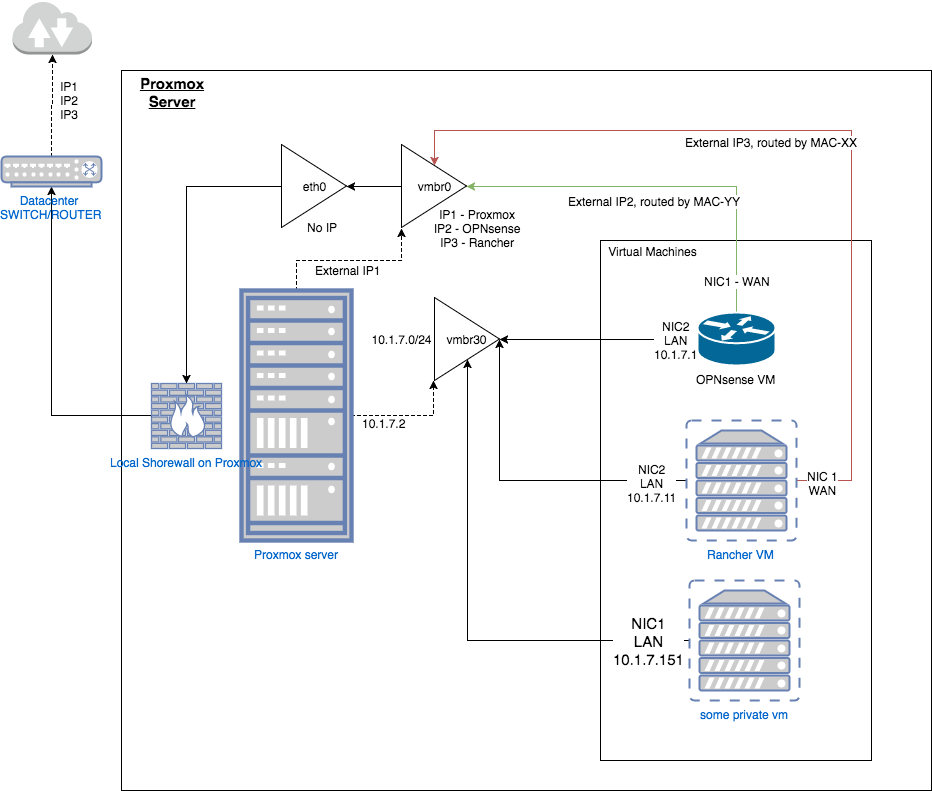 d) IPSec LAN sharing would include i rule in IPSEC chain, "from * to LAN ACCEPT" - but that did not work for me, i had to add "from * to * ACCEPT"

I) Of course i want to fix a)b)c)d), probably starting with understanding c) and d)

II) would it help, in this setup, to add a second NIC?

III) could it be an issue that i activated net.ipv4.ip_forward on the proxmox host ( shouldnt it be routed rather? )

When i got this straighten out i would love to place a comprehensive guide on how to run OPNsense as a Appliance with a private network in on Proxmox, passing some services to the outer world using HAproxe+LE and also accessing the private lan using IPsec

I created an updated / changed setup where pci-passthrough is used. Goals are the same - it reduces the complexity - see here

Further you speak of vmbr0/1/30, but only 0 and 30 are shown in your config. Shorewall does not matter for your vm connectivity (iptables is layer3, ebtables would be layer2 for contrast, but your frames should just fly by the shorewall, not getting to the HV but instead going to the VM's directly. shorewall is just a frontend using iptables in the background).

With that out of the way:

Usually you don't need any routing on the proxmox BRIDGES. A bridge is a switch, as far as you are concerned. vmbr0 is a virtual external bridge which you linked with eth0 (thus created an in-kernel link between a physical nic and your virtual interface, to get packets to flow at all). The bridge could also run without an IP attached to it at all. But to have the HV accessible, usually an external IP is attached to it. Otherwise you'd have to setup your firewall gateway plus a VPN tunnel, give vmbr30 an internal ip, and then you could access the internal IP of the HV from the internet after establishing a tunnel connnection, but that's just for illustration purposes for now.

Your ipsec connectivity issue sounds an awful lot like a misconfigured VPN, but also mobile IPSEC is just often a pain in the butt to work with due to protocol implementation differences, openvpn works a LOT better, but you should know your basics about PKI and certificates to implement that. Plus if opnsense is as counter-intuitive as pfsense when it comes to openvpns, you are possibly in for a week of stabbing at the dark easily. For pfsense there's a installable openvpn config export package which makes life quite easier, don't know wether this one is available for opnsense, too.

It does not so much look like what you call asynchronous routing but rather like a firewall issue you had, concerning the first picture. For your tunnel firewall (interface IPSEC or interface openvpn on opnsense, depending on the tunnel you happen to use) just leave it at ipv4 any:any to any:any, you should only get into the LAN net anyway by the definition of the tunnel itself, opnsense will automatically send the packets out from the LAN interface only, on the second picture.

net.ipv4.ip_forward = 1 = enable routing in the kernel at all on the linux OS's interfaces where you activated it. You can do NAT-ting stuff via iptables, thus making it possible for getting into your LAN by using your external HV IP on vmbr0 in theory, but that's not something you should happen to achieve by accident, you might be able to disable forwarding again without loosing connectivity. At least to the HV, I am unsure about is your extra routes for the other external IPs, but these should be configurable the same way from within the opnsense directly (create the point-to-point links there, the frames will transparently flow through vmbr0 and eth0 to the hetzner gateway) and work, which would be cleaner.

Also you should not make the rancher-VM accessible externally directly and thus bypassing your firewall, I doubt this is what you want to achieve. Rather put the external ip onto the opnsense (as virtual ip of type ip alias), set up 1:1 NAT from IP3 to the internal ip of the rancher-vm, and do the firewalling via opnsense.

Some ascii art how things possibly should look from what I can discern from your information so far, for the sake of brevity only interfaces are used, no distinction is made between physical/virtual servers, and no point-to-point links are shown.

If you want to firewall the HV via opnsense, too, these would be the steps to do so while maintainting connectivity:

Not the answer you're looking for? Browse other questions tagged linux networking routing proxmox opnsense or ask your own question.