I have an odd problem that I just can't seem to diagnose, and it seems to be a PEBCAC thing, but I have spent a good deal of time trying to solve it. I created a WCF service that I host via a windows service. This service has been working fine for a while, and I have a windows forms and a web interface to it. The service was originally developed on XP but I have recently migrated to Windows 7. When I migrated, I found out that the windows security for the service prevented me from using my WinForms app on windows 7, yet it worked just fine on XP talking to the service on Windows Server 2008 R2, Windows 7 and XP. To simplify things while in development, I have disabled security completely, and my WinForms app works again on windows7.

I then made some other changes to the WCF service, adding methods, changing data contracts, etc. The only endpoint changes were to disable security on wshttp. Suddenly, updating the service reference for the web app no longer creates the client proxy, but it does generate the wsdl and xsd files. I have tried numerous combinations of the older and newer service on XP and Win7 with the result that:

I have looked at the service, behavior and endpoint definitions in the new service and they match the old one. Nothing online that I could find references such an error. I realize that I must be doing something wrong in the new code, but since it works fine with WinForms app, I am at a loss to explain the difference.

Any help would be greatly appreciated. Perhaps I can keep some of my hair ;)

After reading the answer I did some more research and tried a few more things:

I have looked at the xsd, etc files for the service with no security and also after restoring things to the way they were in terms of top-level enums with DataContract attribute (have none of these) and also restoring the security values to what they used to be. In both cases, I see nothing amiss, except that the files are named differently: the old service reference uses xsd files with numeric suffixes that range from 2 - 5, whereas the latest one uses 1 - 4 (can't see that this should affect things, since the pointers in the svcmap seem correct). It does make it more difficult to diff things, but I have looked at each file in detail and the data seems correct, just placed into different files.

The wsdl file, after security is restored to the old values is identical except for the host IP and machine name, as expected. But still the configuration.svcinfo and configuration91.svcinfo have no endpoints, behaviors or bindings defined. Also, oddly, of the two data contracts that do get defined, one only has a New member: its data members are not present. This is a data contract that references a class that is marked as Serializable, but is not listed with a DataContract attribute. The only thing that has changed there is that I added a single new string member to the class. What is even more odd is that there is a proper definition of the data contract class in the xsd files.

Yes, probably you have a reference to your contracts assembly from your application, and when you generate your proxy by 'Add Service Reference...' you are reusing types in referenced assemblies and that is why your contract entities are not being generated. To fix that when you are adding your service reference I recommend you to click on the 'Advanced' button and then you should uncheck the option 'Reuse types in referenced assemblies" or maybe just remove the contracts assembly reference from your application.

I hope this work out for you! 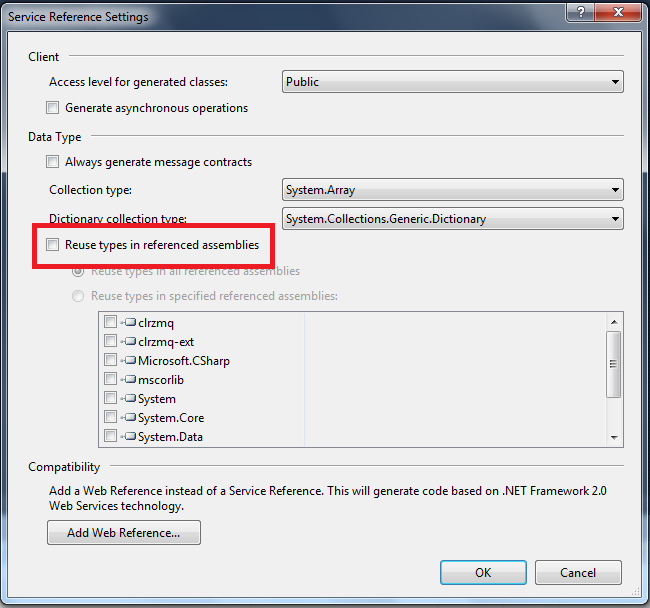 Well, after a lot of futzing about, I eventually figured this out. The problem was caused by my using the same assembly in the web app as is used in the service (I used a different portion of the assembly in the web app). This caused a class that is part of a data contract and that I had modified for the service's use to be different in the web app's compiled assembly than the service was publishing. This in turn caused the service reference to fail to generate the client proxy. Without the client proxy, my web app code showed errors and so I never tried to compile the solution. The simple answer was to build only the common assembly in the web app (which works) and then the service reference generated the proxy properly. Imagine how perplexed I was to have a single data member of a class be the demonstrable cause of the problem, but its name, data type, position in the code, etc. had no effect on the problem! Anyway, probably bad design to be reusing this assembly anyway - likely better to consume this information from the service itself. As a final note, the reason that the winform app worked was because I also use the same assembly in the winform app and it was always being kept up-to-date when I compiled the app, so the changes never conflicted. Hope this helps someone in the future. As a side note to Microsoft - any error information about this conflict would have helped immensely in trouble-shooting, though I grant that it is probably not a common scenario.

This is a long shot, but what happens when you compare the generated xsds? Are the differences what you would expect, or are there some other weird changes in them that don't make sense? I ask because we found that certain contract changes that involve enums at the top level of the operation cause wsdl.exe to behave differently. It seemed to fall back to using XmlSerializer instead of DataContractSerializer, which had many side-effects, such as types changing from Lists to arrays. I don't remember if there was also a problem with the client code generation, however.

Not the answer you're looking for? Browse other questions tagged visual-studio-2008 wcf or ask your own question.