Moving Files into a Real Folder in Xcode

When I started my project I was happy to use Groups in Xcode rather than literal folders: Since I'm using the browser in Xcode to access everything, stuff was nicely organized and I was happy.

However, now that the project is about to be shared for version control, the project folder itself is a horror show for those trying to scan it via a terminal, about 300 files, over half of which are graphics.

I'm trying to now reorganize things, creating real folders and importing them into Xcode. Unfortunately Xcode doesn't let me work with them the way it does with groups. For example, if I right-click on an actual added folder (blue, not yellow) and choose to add existing files, it doesn't actually put them in that folder, it puts them in its root.

Similarly, I can't move a file from a faux-folder (a group) into a real folder: Xcode doesn't consider the real folders to be valid places to move stuff to.

What am I missing? How can I convince Xcode to let me use the folders the way I use groups? There's an answer here to a somewhat similar question, but it doesn't actually solve my problem since I'm working with existing files.

If you're moving a bunch of files into a new folder and are keeping the child hierarchy, it's actually a lot easier than moving each file individually:

Isn't that nice? At most you'll have to repeat these 5 steps once for each new group you've created (which beats relocating each file individually!)

Say you accidentally screwed up the move and now a bunch of your files are red and can't be found: select multiple files that are broken, and using the same folder icon in the screenshot from step 4, find the correct folder that contains these files and they'll automatically resolve the missing paths.

FURTHER EDITED JUNE 2017: Xcode 9 does this automatically, no special effort required. This answer and Brandon's only apply to Xcode 8 and earlier.

EDITED DECEMBER 2016: Brandon's answer below is a better solution now. Back when this answer was created in 2010 this was the only option I could find. I now suggest Brandon's answer, below.

It turns out that moving files into real folders is certainly possible, though not as simple as it should be.

I got the basic information from a question here, Xcode organising files and folders (core data model objects - iPhone), but learned important things along the way.

Moving the files is a two-step process with multiple sub-steps:

I learned a couple of important things while adjusting the ~300 files in this project:

Hope this helps some future person. I'm surprised that it was as difficult and occasionally tricky as it was. 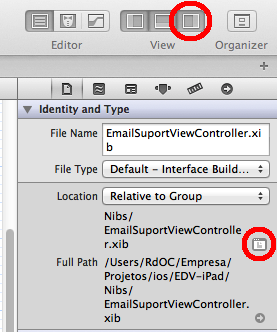 I've found the most reliable way to work around XCode's appalling design here is to organize ALL your files in Finder, for two reasons:

Even when moving existing XCode files around, it is quicker to do this:

NB: I never use the "create dragged folders with sub-groups" option, because in XCode 3 that was often hopelessly buggy and could corrupt projects. Apple clearly (IMHO) does NOT use this feature internally, otherwise it would never have been allowed to be so buggy; if Apple doesn't use a thing, it's generally not safe to use it either - they aren't good at testing :)

There is a simple to setup and use Command Line Tool - "synx" available in github that do exactly what is needed here.

It reorganizes Xcode project folder in finder to match Xcode groups in project.

You can find it here: https://github.com/venmo/synx

UPDATE: XCode 9 supports this feature by default. So, no need to use other tools anymore!

It seems Xcode 9 now supports it by default. When you move files from a group to another, the file will also be moved from the old folder to the new folder. This was announced in WWDC 2017.

I used the following tool to achieve it.Organize Folders in Groups Xcode

I'm usually move files to the directory directly in the Finder, then fix the files with red-color names in XCode in their "Get Info" dialog: click the "Choose..." button and select file's new locatoin. That's the first response when I want to move files in XCode, and it works.

As of Xcode 4.5 when you drag in a folder structure it is automatically turned into nested groups in the Project Navigator. Then, if you look on disk (e.g. right click and choose Show in Finder), the folder structure has been retained.

I found trying to fix things from an older project was just a pain. It turned out much easier to just delete these files and drag them in again.

Assuming you have files A,B,C in a logical group, but want them moved into a folder on your hard drive.

On XCode 11 (I just validated this on XCode 11.6), you can select the files you would like to move under the project navigator, right click on the selected files, and click "New Group From Selection". This will create a folder on disk and move the files appropriately.

Not the answer you're looking for? Browse other questions tagged xcode macos ios directory or ask your own question.

26
Moving files within Xcode
6
Xcode organising files and folders (core data model objects - iPhone)
4
Settingup Xcode project to add new file in custom directory
5
Classes in Swift files inside folder references not seen by Xcode 10's compiler
9
Anyone have a method for moving files around keeping Xcode project and git in sync?
2
Moving source files in Xcode 4.2
0
Can I put all nib files together in another folder in target application package?
0
Legacy iOS app didn't use folder structure for it's files at all. How to refactor without individually telling each file where it now lives?

929
Git ignore file for Xcode projects
1541
How can I Remove .DS_Store files from a Git repository?
1278
Xcode - How to fix 'NSUnknownKeyException', reason: … this class is not key value coding-compliant for the key X" error?
3467
How do I list all files of a directory?
1461
How to "add existing frameworks" in Xcode 4?
2119
How to change permissions for a folder and its subfolders/files in one step
2924
How do I delete a file or folder in Python?
1616
Download a single folder or directory from a GitHub repo
6698
How do I find all files containing specific text on Linux?
902
Xcode error "Could not find Developer Disk Image"