Q1. Where exactly does "business logic" lie in the MVC pattern? I am confused between Model and Controller.

Q2. Is "business logic" the same as "business rules"? If not, what is the difference?

It would be great if you could explain with a small example.

Fist of all:
I believe that you are mixing up the MVC pattern and n-tier-based design principles.

Using an MVC approach does not mean that you shouldn't layer your application.
It might help if you see MVC more like an extension of the presentation layer.

If you put non-presentation code inside the MVC pattern you might very soon end up in a complicated design.
Therefore I would suggest that you put your business logic into a separate business layer.

Just have a look at this: Wikipedia article about multitier architecture

Today, MVC and similar model-view-presenter (MVP) are Separation of Concerns design patterns that apply exclusively to the presentation layer of a larger system.

Anyway ... when talking about an enterprise web application the calls from the UI to the business logic layer should be placed inside the (presentation) controller.

That is because the controller actually handles the calls to a specific resource, queries the data by making calls to the business logic and links the data (model) to the appropriate view.

Mud told you that the business rules go into the model.
That is also true, but he mixed up the (presentation) model (the 'M' in MVC) and the data layer model of a tier-based application design.
So it is valid to place your database related business rules in the model (data layer) of your application.
But you should not place them in the model of your MVC-structured presentation layer as this only applies to a specific UI.

This technique is independent of whether you use a domain driven design or a transaction script based approach.

Let me visualize that for you:

The model that you see above means that you have an application that uses MVC, DDD and a database-independed data layer.
This is a common approach to design a larger enterprise web application.

But you can also shrink it down to use a simple non-DDD business layer (a business layer without domain logic) and a simple data layer that writes directly to a specific database.
You could even drop the whole data-layer and access the database directly from the business layer, though I do not recommend it.

[Note:] You should also be aware of the fact that nowadays there is more than just one "model" in an application. Commonly, each layer of an application has it's own model. The model of the presentation layer is view specific but often independent of the used controls. The business layer can also have a model, called the "domain-model". This is typically the case when you decide to take a domain-driven approach. This "domain-model" contains of data as well as business logic (the main logic of your program) and is usually independent of the presentation layer. The presentation layer usually calls the business layer on a certain "event" (button pressed etc.) to read data from or write data to the data layer. The data layer might also have it's own model, which is typically database related. It often contains a set of entity classes as well as data-access-objects (DAOs).

The question is: how does this fit into the MVC concept?

Answer -> It doesn't!
Well - it kinda does, but not completely.
This is because MVC is an approach that was developed in the late 1970's for the Smalltalk-80 programming language. At that time GUIs and personal computers were quite uncommon and the world wide web was not even invented! Most of today's programming languages and IDEs were developed in the 1990s. At that time computers and user interfaces were completely different from those in the 1970s.
You should keep that in mind when you talk about MVC.
Martin Fowler has written a very good article about MVC, MVP and today's GUIs.

Business rules go in the model.

Say you were displaying emails for a mailing list. The user clicks the "delete" button next to one of the emails, the controller notifies the model to delete entry N, then notifies the view the model has changed.

Perhaps the admin's email should never be removed from the list. That's a business rule, that knowledge belongs in the model. The view may ultimately represent this rule somehow -- perhaps the model exposes an "IsDeletable" property which is a function of the business rule, so that the delete button in the view is disabled for certain entries - but the rule itself isn't contained in the view.

The model is ultimately gatekeeper for your data. You should be able to test your business logic without touching the UI at all.

The term business logic is in my opinion not a precise definition. Evans talks in his book, Domain Driven Design, about two types of business logic:

Domain logic is logic that corresponds to the actual domain. So if you are creating an accounting application, then domain rules would be rules regarding accounts, postings, taxation, etc. In an agile software planning tool, the rules would be stuff like calculating release dates based on velocity and story points in the backlog, etc.

Domain logic most certainly goes into the model layer. The model would also correspond to the domain layer in DDD.

A1: Business Logic goes to Model part in MVC. Role of Model is to contain data and business logic. Controller on the other hand is responsible to receive user input and decide what to do.

Take a look at Wikipedia entry for MVC. Go to Overview where it mentions the flow of MVC pattern.

As a couple of answers have pointed out, I believe there is some some misunderstanding of multi tier vs MVC architecture.

I would like to point out that it is not uncommon to find code that mixes business logic and data access in one of the MVC components, especially if the application was not architected using multiple tiers. However, in most enterprise applications, you will commonly find multi tier architectures with an MVC architecture in place within the presentation layer.

This is an answered question, but I'll give my "one cent":

Business rules belong in the model. The "model" always consists of (logically or physically separated):

Business rules live in the domain model, are exposed in a presentation-suitable form to the "presentation" model and are sometimes duplicated (or also enforced) in the "data layer".

It does not make sense to put your business layer in the Model for an MVC project.

Say that your boss decides to change the presentation layer to something else, you would be screwed! The business layer should be a separate assembly. A Model contains the data that comes from the business layer that passes to the view to display. Then on post for example, the model binds to a Person class that resides in the business layer and calls PersonBusiness.SavePerson(p); where p is the Person class. Here's what I do (BusinessError class is missing but would go in the BusinessLayer too): 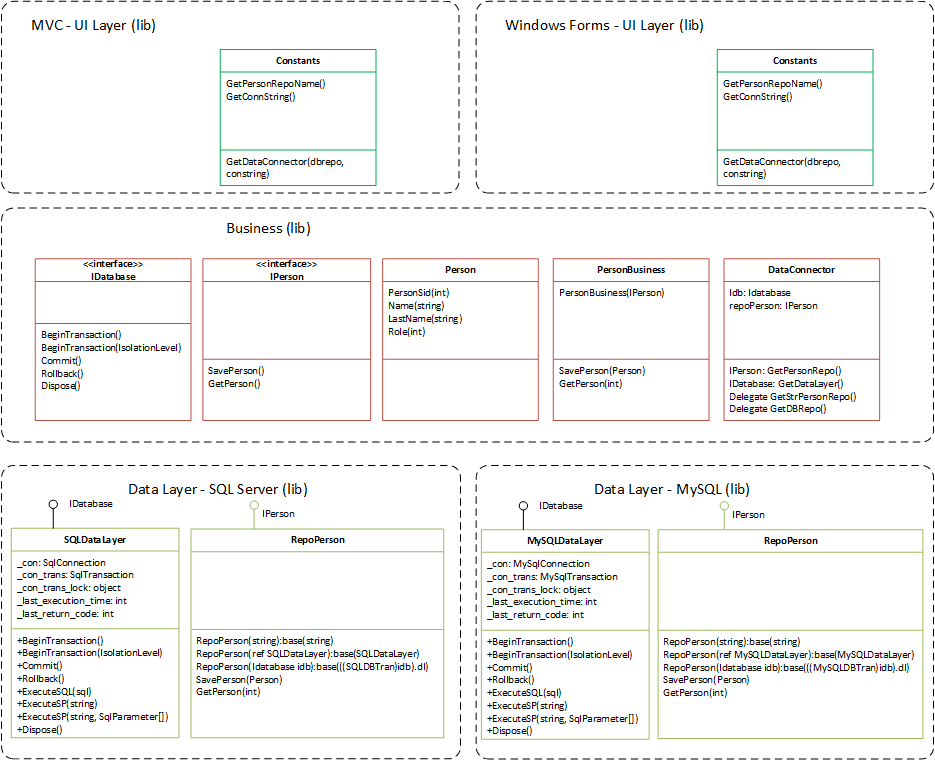 Business logics can be considered in two categories:

The first category goes into model and the second one belongs to controller. This is because the cases in the second category are broad application logics and putting them in the model may mix the model's abstraction (for example, it is not clear if we need to put those decisions in one model class or another, since they are related to both!).

See this answer for a specific distinction between model and controller, this link for very exact definitions and also this link for a nice Android example.

The point is that the notes mentioned by "Mud" and "Frank" above both can be true as well as "Pete"'s (business logic can be put in model, or controller, according to the type of business logic).

Finally, note that MVC differs from context to context. For example, in Android applications, some alternative definitions are suggested that differs from web-based ones (see this post for example).

Business logic is more general and (as "decyclone" mentioned above) we have the following relation between them:

Why don't you introduce a service layer. then your controller will be lean and more readable, then your all controller functions will be pure actions. you can decompose business logic as you much as you need within service layer . code reusability is hight . no impact on models and repositories.

Controller = responds to user actions, and passes the user requests for data retrieval or delete/update to the model, subject to the business rules specific to an organization. These business rules could be implemented in helper classes, or if they are not too complex, just directly in the controller actions. The controller finally asks the view to update itself so as to give feedback to the user in the form of a new display, or a message like 'updated, thanks', etc.,

View = UI that is generated based on a query on the model.

There are no hard and fast rules regarding where business rules should go. In some designs they go into model, whereas in others they are included with the controller. But I think it is better to keep them with the controller. Let the model worry only about database connectivity.

Not the answer you're looking for? Browse other questions tagged design-patterns model-view-controller business-logic business-rules or ask your own question.

0
Business-Logic refers to Controller or Model. Please elaborate
505
MVC pattern on Android
11
Where does the business logic go in MVC?
3
MVVM - Patterns and Practicality
2
Where do I put business logic in IOS app with Core Data?
0
Best place to calculate a value before storage in database
0
Performing Calculation in django
1
How do i loop database in view with a specific table column value
0
MVC (Model View Controller) with Encapsulation/Defensive Programming

2249
What are MVP and MVC and what is the difference?
1093
Does functional programming replace GoF design patterns?
143
MVC Vs n-tier architecture
87
Where does the "business logic layer" fit in to an MVC application?
524
What are the differences between Abstract Factory and Factory design patterns?
342
Where to put model data and behaviour? [tl; dr; Use Services]
552
Separation of business logic and data access in django
228
What is difference between MVC, MVP & MVVM design pattern in terms of coding c#