As a rule of thumb, every time you want to compare ROC AUC vs F1 Score, think about it as if you are comparing your model performance based on:

Note that Sensitivity is the Recall (they are the same exact metric).

Now we need to understand what are: Specificity, Precision and Recall (Sensitivity) intuitively!

Specificity: is given by the following formula:

Intuitively speaking, if we have 100% specific model, that means it did NOT miss any True Negative, in other words, there were NO False Positives (i.e. negative result that is falsely labeled as positive). Yet, there is a risk of having a lot of False Negatives!

Precision: is given by the following formula:

Intuitively speaking, if we have a 100% precise model, that means it could catch all True positive but there were NO False Positive.

Recall: is given by the following formula:

Intuitively speaking, if we have a 100% recall model, that means it did NOT miss any True Positive, in other words, there were NO False Negatives (i.e. a positive result that is falsely labeled as negative). Yet, there is a risk of having a lot of False Positives!

As you can see, the three concepts are very close to each other!

As a rule of thumb, if the cost of having False negative is high, we want to increase the model sensitivity and recall (which are the exact same in regard to their formula)!.

This is because the consequences will be worse than a False Positive (incorrectly labeling a a harmless transaction as fraudulent or a non-contagious patient as contagious).

On the other hand, if the cost of having False Positive is high, then we want to increase the model specificity and precision!.

It's given by the following formula:

F1 Score keeps a balance between Precision and Recall. We use it if there is uneven class distribution, as precision and recall may give misleading results!

So we use F1 Score as a comparison indicator between Precision and Recall Numbers! 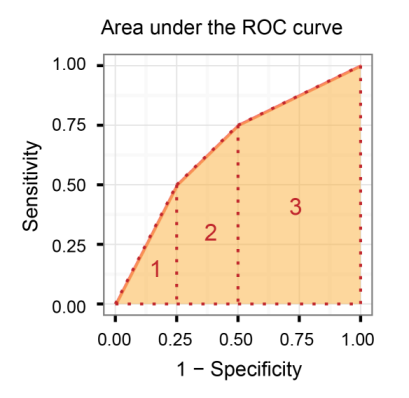 So, the bigger the AUROC, the greater the distinction between True Positives and True Negatives!

In general, the ROC is for many different levels of thresholds and thus it has many F score values. F1 score is applicable for any particular point on the ROC curve.

Consequently, when you have a data imbalance between positive and negative samples, you should always use F1-score because ROC averages over all possible thresholds!

Credit Card Fraud: Handling highly imbalance classes and why Receiver Operating Characteristics Curve (ROC Curve) should not be used, and Precision/Recall curve should be preferred in highly imbalanced situations

If you look at the definitions, you can that both AUC and F1-score optimize "something" together with the fraction of the sample labeled "positive" that is actually true positive.

The difference becomes important when you have highly unbalanced or skewed classes: For example there are many more true negatives than true positives.

Suppose you are looking at data from the general population to find people with a rare disease. There are far more people "negative" than "positive", and trying to optimize how well you are doing on the positive and the negative samples simultaneously, using AUC, is not optimal. You want the positive sample to include all positives if possible and you don't want it to be huge, due to a high false positive rate. So in this case you use the F1 score.

Conversely if both classes make up 50% of your dataset, or both make up a sizable fraction, and you care about your performance in identifying each class equally, then you should use the AUC, which optimizes for both classes, positive and negative.

AUC does an implicit weighting of the samples, which F1 does not.

In my last use case comparing the effectiveness of drugs on patients, it's easy to learn which drugs are generally strong, and which are weak. The big question is whether you can hit the outliers (the few positives for a weak drug or the few negatives for a strong drug). To answer that, you have to specifically weigh the outliers up using F1, which you don't need to do with AUC.

to predict the positive cases correctly

one can rewrite a bit your goal and get: when a case is really positive you want classify it as positive too. The probability of such event p(predicted_label = positive | true_label = positive) is a recall by definition. If you want to maximize this property of your model, you'd choose the Model 1.

26
How to interpret almost perfect accuracy and AUC-ROC but zero f1-score, precision and recall
0
How to interpret the AUC score in this case?
39
sklearn metrics for multiclass classification
2
find roc/auc/auc-roc score for single class 1's in y_true variable
0
Is Choosing a Model based on F1 Score (Computed at threshold = 0.5) equivalent to choosing a model based on Area Under Precision Recall Curve?
1
How to plot ROC-AUC figures without using scikit-learn