I just finished reading the introductions for VueJS and Django Channels and would like to use them together to provide real-time updates to several components on a webpage. This illustrates the basic idea: 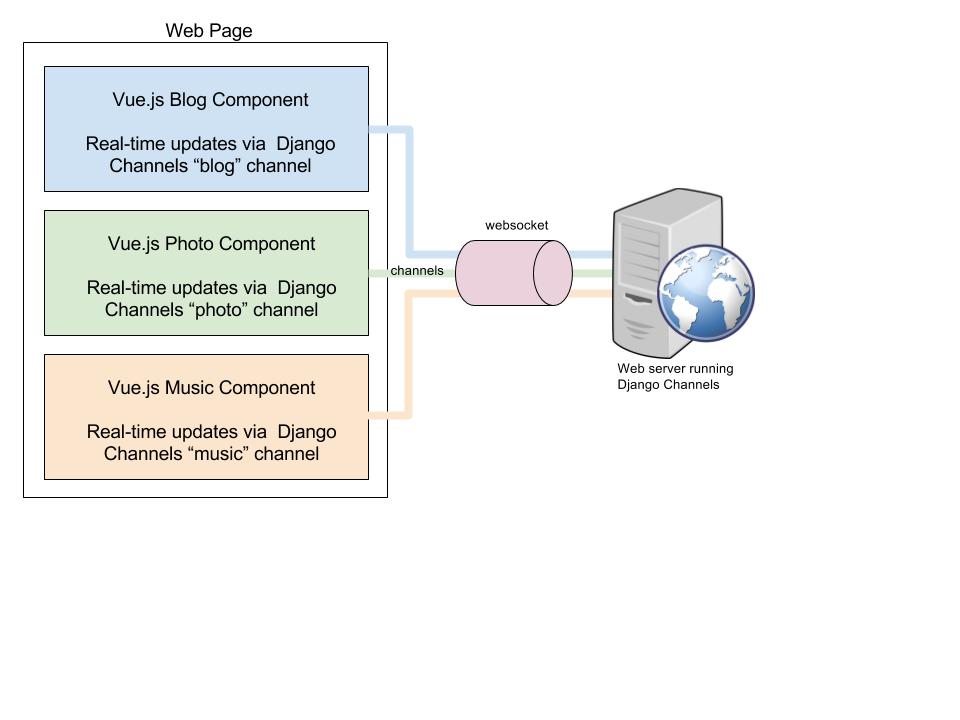 Being new to VueJS, it seems the diagram above requires some type of "middle man", between the VueJS components and the websocket, that makes sure each component gets the correct data.

So, my questions are:

Thanks for your help :)

No, you don't need a middle man. But you could ( if there is a lot of updates through channel ) be better of with using Vuex and feed it with socket data. Then if everything is wired correctly your Vue app would be just the view layer that reacts ( no pun intended ) to changes.

Django channels are just queues ( first in first out ). You pass whatever data you need to sent to the front end to the channel. All the data gets serialized and passed to the queue. Channel is in worker mode and as soon as it receives a message ( with data ) it tries to emit it on the channel it self.

How to harvest this data in Vue?

What I did was set up Vuex. I've then made a Vuex plugin called createWebSockets.js. When you go through the docs of Vuex and Vuex plugins you'll see that plugin has access to Vuex commit method. In said plugin I opened sockets to channels I've had running on the server and whenever new message came through I just pushed the data in Vuex and my Vue app just reacted to these changes.

I can probably find it somewhere if you need more help.

So after you get yourself familiar with Vuex and add it to your app you could do something like this:

This is how you would you update Vuex through sockets.

Not the answer you're looking for? Browse other questions tagged python django vue.js django-channels or ask your own question.

830
How do I do a not equal in Django queryset filtering?
648
How to check Django version
1158
What is the difference between null=True and blank=True in Django?
1
Using Django Channels for a progress indicator
0
msgpack error when using rabbitmq and django channels
3
How to handle single websocket connection for all chats in Django Channels
1
Send data to a Django channels consumer