How can a slow internet on client side be a reason for server time out exception in asp.net?

I have a .Net application up and running.

We have had a fluctuating connection yesterday. While testing in such scenarios we had received multiple server time out exception emails like below.

IMPORTANT: Above exception occurred while doing a ajax post by a button placed with in update panel.

My question here is why would a slow internet on client side raise such server time out exception?

Isn't server timeout exception is related to such cases where server cannot execute the request in underlying time mention in HttpRuntime setting? May be due to some lengthy operation or some long database execution which takes longer than the time mentioned in setting under HttpRuntime.

If server is not able to connect to the client due to clients fluctuating internet, then Client Disconnected exception would be raised which we did yesterday. But I am not able to conclude the reason for this server timeout exception.

I already know that increasing the execution timeout will fix the issue, but I have to provide technical explanation for the reason as to why such exception of Server Timeout raised.

My best guess here is that the ajax request would be doing some continuous communication with server for executing of single request server and would raise timeout exception if it does not receives some required further communication messages due to client's bad internet. I have search over internet for the same to support my guess but in vain.

Also to provide environmental details, there is a load balancer serving the request.

Any help would be highly appreciated.

It is because (as you write) the connection of client to server is slow, so if the server (or client) sending data to this server, connection can´t handle it, so you get timeout error, because the data can´t been transfered in defined time.

You also write, that this is caused by sending Ajax request, so maybe try to increase execusion timeout in web configuration file (web.config): 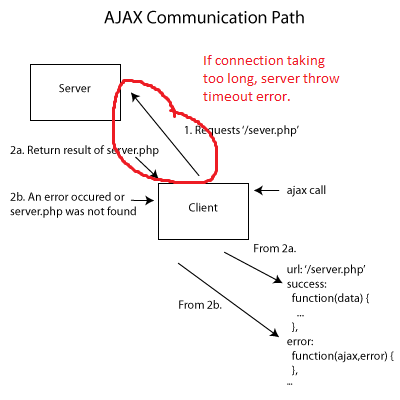 More about executionTimeout here and here about Ajax requests.

Firstly, I think the cause of this error is because of execution time required by your application request connecting with the remote server is exceeding the currently set ASP.NET request execution timeout value. As per the MSDN Exception Document, default value is set to 110 seconds, in that it is remarked like:

The ExecutionTimeout property indicates the maximum number of seconds a request is allowed to execute before being automatically shut down by ASP.NET.

So based on error detail with event code 3001 occurs because no response was received during the time-out period for a request. You can use IIS troubleshooting failed request mechanism to figure it out exact issue like any poor performance/deadlocks when making calls from your ASP.NET application.

Secondly, it is not related to user's internet connectivity issue otherwise you get exception with status like connection-closed or keep alive failure. See this article for detail. The browser is going to wait for a 60 minutes(which is very long period of time that server isn't going to answer any request)for server to response.

And at any case when the browser abandons any request, it is going to close the socket and you'll get an error page from the browser. You don't get anything related to sever-end.

3
What is AJAX and how does it work?

657
Cross-thread operation not valid: Control accessed from a thread other than the thread it was created on
419
What is the best workaround for the WCF client `using` block issue?
294
I just discovered why all ASP.Net websites are slow, and I am trying to work out what to do about it
340
Validation failed for one or more entities while saving changes to SQL Server Database using Entity Framework
390
Timeout expired. The timeout period elapsed prior to completion of the operation or the server is not responding. The statement has been terminated
656
Best practice to call ConfigureAwait for all server-side code
26
Setting time out in apache http client
9
Simulate HTTP server time out for HTTP client request