I'd like to debug a vbscript with Visual Studio 2017 Community Edition and followed the steps mentioned here for VS2015:

in the commandline, but no debugger starts. Is there a problem with the 2017th version of VS or are there some steps (e.g. configuration steps in VS) which are not shown in the video?

Neither of those solutions worked for me. Found a workaround on MSDN

Please run your VS2017 as the admin, and then enable the script option under TOOLS->Options->Debugging->Just-In-Time, and then re-debug it again. 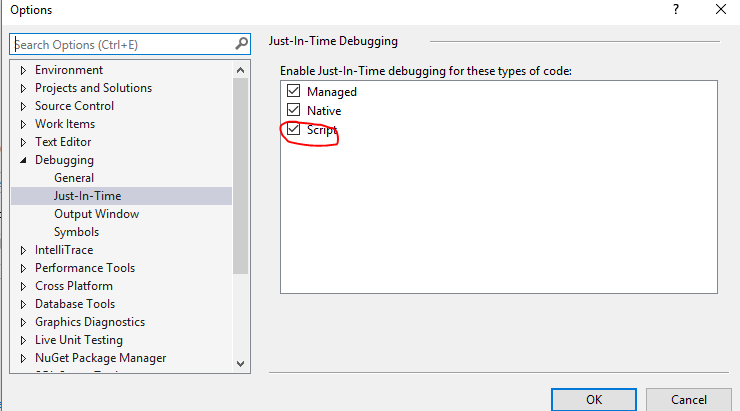 Even if I didn't use the VS2017 community version, but I get the same issue, I found that it was related to the JIT debugging in my side using VS2017 Enterprise version and it works well after I enable it:

CSCript.exe requires double-forward-slashes for its own command-line options, because single-slashed arguments are passed to the script itself.

I also suggest the //D argument so it breaks immediately.

Not the answer you're looking for? Browse other questions tagged visual-studio debugging vbscript wsh or ask your own question.