I would like to make a 5-band audio equalizer (60Hz, 230Hz, 910Hz, 4kHz, 14kHz) using AVAudioEngine. I would like to have the user input gain per band through a vertical slider and accordingly adjust the audio that is playing. I tried using AVAudioUnitEQ to do this, but I hear no difference when playing the audio. I tried to hardcode in values to specify a gain at each frequency, but it still does not work. Here is the code I have:

I'm not sure why this is happening, but I tried several different things to debug. I thought that it might be the order of the functions so I tried switching it so that audioEngine.connect is called after adjusting all of the bands, but that did not make a difference either.

I tried this same code with using an AVAudioUnitTimePitch, and it worked perfectly, so I am dumbfounded as to why it does not work with AVAudioUnitEQ.

I do not want to use any third-party libraries or cocoa pods for this project, I would like to do it using AVFoundation alone. 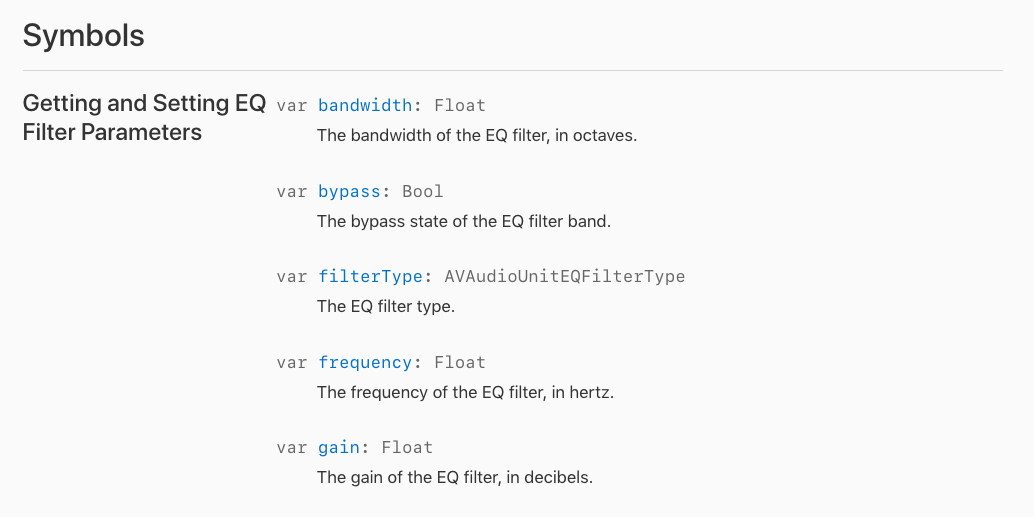 Looking through the documentation, I noticed that I had messed with all of the parameters except bypass and it seems that changing this flag fixed everything!

So, I believe the main issue here is that each AVAudioUnitEQ band must not be bypassed by the provided system values rather than the values the programmer sets.

and everything started working. Furthermore, to make an effective equalizer that allows the user to modify individual frequencies the filtertype for each band should be set to .parametric.

I am still unsure on what I should set the bandwith to, but I can probably check online for that or just mess with it until the sound matches a different equalizer application.

Not the answer you're looking for? Browse other questions tagged ios swift avfoundation avaudioengine avaudioplayernode or ask your own question.

1
setting gain of mp3 files (aka normalize) for playback

332
“Warning: iPhone apps should include an armv6 architecture” even with build config set
683
Version vs build in Xcode
86
Make a simple fade in animation in Swift?
100
Getting version and build information with Swift
454
How do I get the App version and build number using Swift?
197
How to make a simple collection view with Swift
4
Does AVAudioUnitEQ actually work on iOS?
7
Simple tunnel build fails - NEAppProxyErrorDomain