The use of Swift 3 @objc inference in Swift 4 mode is deprecated?

Briefly, while using Xcode 9 Beta, I have run into the following warning:

After some research, I still have no idea how to fix the issue. I would greatly appreciate any tips on how to fix this issue as well as an explanation of what is going on.

My goal is to grasp a better understanding of what is happening with my code.

I got rid of this warning by changing the "Swift 3 @objc Inference" build setting of my targets to "Default".

Before Swift 4, the compiler made some Swift declarations automatically available to Objective-C. For example, if one subclassed from NSObject, the compiler created Objective-C entry points for all methods in such classes. The mechanism is called @objc inference.

In Swift 4, such automatic @objc inference is deprecated because it is costly to generate all those Objective-C entry points. When "Swift 3 @objc Inference" setting is set to "On", it allows the old code to work. However, it will show deprecation warnings that need to be addressed. It is recommended to "fix" these warnings and switch the setting to "Default", which is the default for new Swift projects.

Please also refer to this Swift proposal for more information.

- What is @objc inference? What is going on?

In Swift 3, the compiler infers @objc in a number of places so you wouldn't have to. In other words, it makes sure to add @objc for you!

In Swift 4, the compiler no longer does this (as much). You now must add @objc explicitly.

It will take some time to convert everything, but since it's the default for Swift 4, it's worth doing it.

- How do I stop the compiler warnings/errors?

There are two ways to go about converting your code so the compiler doesn't complain.

One is to use @objc on each function or variable that needs to be exposed to the Objective-C runtime:

The other is to use @objcMembers by a Class declaration. This makes sure to automatically add @objc to ALL the functions and variables in the class. This is the easy way, but it has a cost, for example, it can increase the size of your application by exposing functions that did not need to be exposed.

- What is @objc and why is it necessary?

If you introduce new methods or variables to a Swift class, marking them as @objc exposes them to the Objective-C runtime. This is necessary when you have Objective-C code that uses your Swift class, or, if you are using Objective-C-type features like Selectors. For example, the target-action pattern: button.addTarget(self, action:#selector(didPressButton), for:.touchUpInside)

- Why would I not mark everything @objc?

There are negatives that come with marking something as @objc:

Please keep in mind that this is a very high-level summary and that it is more complicated than I wrote. I would recommend reading the actual proposal for more information. 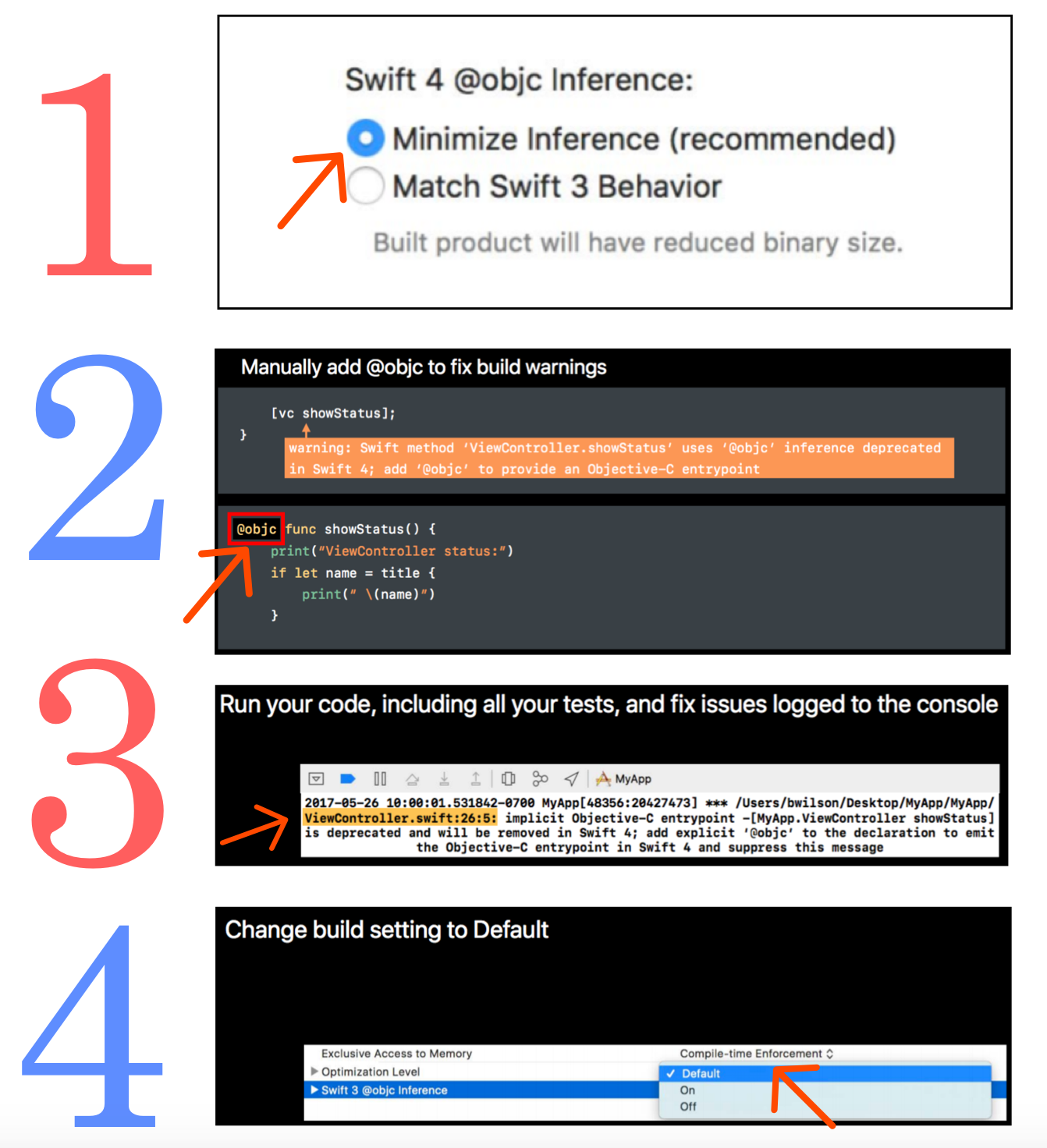 I had this warning with "Swift 3 @objc Inference" = "Default" setting. Then I realized that is was set for the Project - not for the target. So, make sure that you have "Default" setting in your target to get rid of the warning.

You can simply pass to "default" instead of "ON". Seems more adherent to Apple logic.

(but all the other comments about the use of @obj remains valid.)

Indeed, you'll get rid of those warnings by disabling Swift 3 @objc Inference. However, subtle issues may pop up. For example, KVO will stop working. This code worked perfectly under Swift 3:

After migrating to Swift 4, and setting "Swift 3 @objc Inference" to default, certain features of my project stopped working. It took me some debugging and research to find a solution for this. According to my best knowledge, here are the options:

Re-enabling @objc inference leaves you with the warnings, but it's the quickest solution. Note that it's only available for projects migrated from an earlier Swift version. The other two options are more tedious and require some code-digging and extensive testing.

I'm an occasional iOS dev (soon to be more) but I still couldn't find the setting as guided by the other answer (since I did not have that Keychain item the answer shows), so now that I found it I thought I might just add this snapshot with the highlighted locations that you will need to click and find. 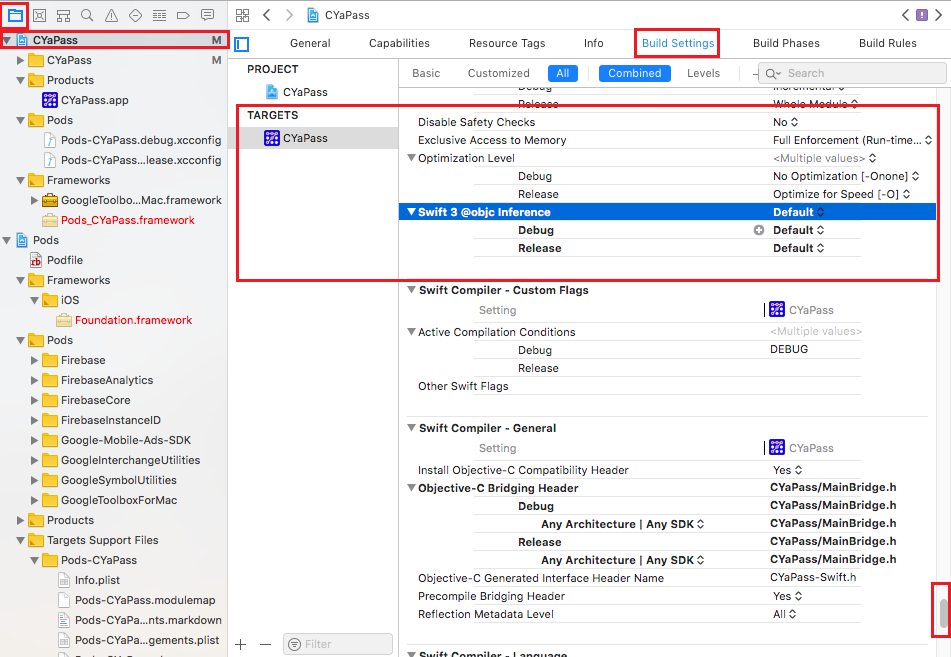 You can try to "Pod update" and/or "flutter clean"

I also set this setting in xcode.

The Objective-C interface setting is as follows: 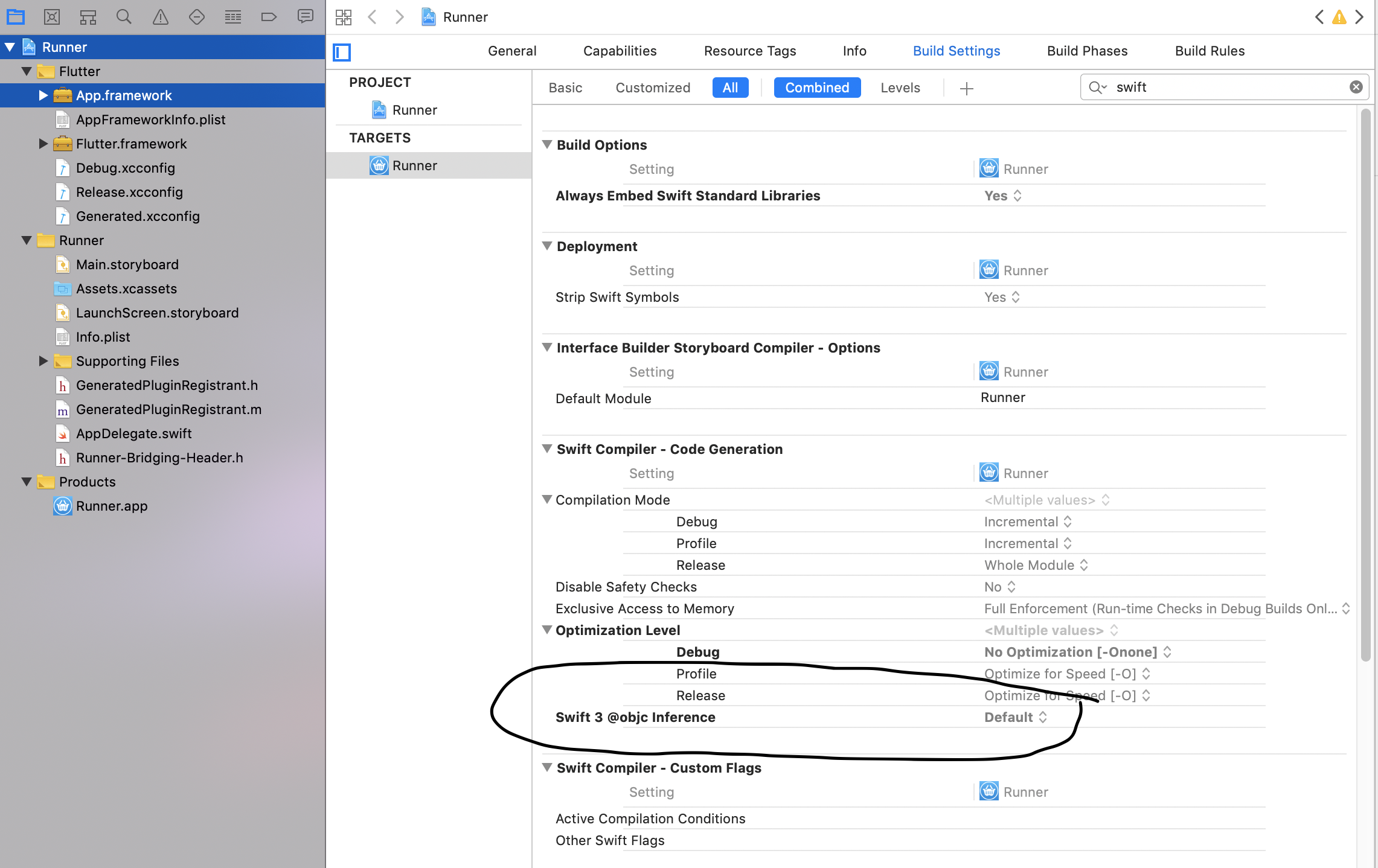 The use of Swift 3 @objc inference in Swift 4 mode is deprecated?

All you need just run a test wait till finish, after that go to Build Setting, Search in to Build Setting Inference, change swift 3 @objc Inference to (Default). that's all what i did and worked perfect.

On top of what @wisekiddo said, you can also modify your build settings in the project.pbxproj file by setting the Swift 3 @obj Inference to default like SWIFT_SWIFT3_OBJC_INFERENCE = Default; for your build flavors (i.e. debug and release), especially if you're coming from some other environment besides Xcode

Not the answer you're looking for? Browse other questions tagged swift swift4 xcode9-beta or ask your own question.

4
Use of @objc inference in Swift 4
0
The use of Swift 3 @objc inference in Swift 4 mode is deprecated in Alamofire?
1
add action on UIButton in Swift 4
134
How can I deal with @objc inference deprecation with #selector() in Swift 4?
32
Got “is not a recognized Objective-C method” when bridging Swift to React-Native
26
Swift 4 “This class is not key value coding compliant”
15
Firebase converting snapshot value to objects
20
App submission failed - 1+ corrupted binaries/non-public API usage and no additional details
11
Non-public API usage : The app contains one or more corrupted binaries
3
How do I use Key-Value Coding in Swfit 4.0?
See more linked questions

582
How can I make a weak protocol reference in 'pure' Swift (without @objc)
134
How can I deal with @objc inference deprecation with #selector() in Swift 4?
316
How can I use String substring in Swift 4? 'substring(to:)' is deprecated: Please use String slicing subscript with a 'partial range from' operator
2
The use of Swift 3 @objc inference in Swift 4 mode is deprecated? (again)
0
Swift 3 @objc interference issue not being fixed :-(
0
Flutter not building iOS application, is it a swift error?
0
I need to add code to delegate.m file and I only can find delegate.swift in flutter