How to enable CORS in ASP.net Core WebAPI

What I am trying to do

I also have a Client Website which I want to make consume that API. The Client Application will not be hosted on Azure, but rather will be hosted on Github Pages or on another Web Hosting Service that I have access to. Because of this the domain names won't line up.

Looking into this, I need to enable CORS on the Web API side, however I have tried just about everything for several hours now and it is refusing to work.

How I have the Client Setup Its just a simple client written in React.js. I'm calling the APIs through AJAX in Jquery. The React site works so I know its not that. The Jquery API call works as I confirmed in Attempt 1. Here is how I make the calls

What I have tried

I have followed this tutorial on the Microsoft Website to a T, trying all 3 options of enabling it Globally in the Startup.cs, Setting it up on every controller and Trying it on every Action.

Following this method, the Cross Domain works, but only on a single Action on a single controller (POST to the AccountController). For everything else, the Microsoft.AspNetCore.Cors middleware refuses to set the headers.

I installed Microsoft.AspNetCore.Cors through NUGET and the version is 1.1.2

Here is how I have it setup in Startup.cs

As you can see, I am doing everything as told. I add Cors before MVC both times, and when that didn't work I attempted putting [EnableCors("MyPolicy")] on every controller as so

After several hours of trying on the previous attempt, I figured I would try to bruteforce it by trying to set the headers manually, forcing them to run on every response. I did this following this tutorial on how to manually add headers to every response.

These are the headers I added

These are other headers I tried which failed

With this method, the Cross Site headers are being properly applied and they show up in my developer console and in Postman. The problem however is that while it passes the Access-Control-Allow-Origin check, the webbrowser throws a hissy fit on (I believe) Access-Control-Allow-Headers stating 415 (Unsupported Media Type)

So the brute force method doesn't work either

Has anyone gotten this to work and could lend a hand, or just be able to point me in the right direction?

So to get the API calls to go through, I had to stop using JQuery and switch to a Pure Javascript XMLHttpRequest format.

I managed to get the Microsoft.AspNetCore.Cors to work by following MindingData's answer, except within the Configure Method putting the app.UseCors before app.UseMvc.

In addition, when mixed with the Javascript API Solution options.AllowAnyOrigin() for wildcard support began to work as well.

So I have managed to get Attempt 2 (brute forcing it) to work... with the only exception that the Wildcard for Access-Control-Allow-Origin doesn't work and as such I have to manually set the domains that have access to it.

Its obviously not ideal since I just want this WebAPI to be wide opened to everyone, but it atleast works for me on a separate site, which means it's a start

If you haven't already, install the CORS nuget package.

In the ConfigureServices method of your startup.cs, add the CORS services.

Then in your Configure method of your startup.cs, add the following :

Make sure you declare the CORS functionality before MVC so the middleware fires before the MVC pipeline gets control and terminates the request.

In the configure method tell CORS to use the policy you just created:

I just found this compact article on the subject - https://dzone.com/articles/cors-in-net-core-net-core-security-part-vi

and used it this way in the startup.cs

In my case only get request works well according to MindingData's answer. For other types of request you need to write:

I was struggling with this for DAYS.

I finally got it to work by moving app.UseCors(CORS_POLICY); to the TOP of Configure().

Make sure you declare the CORS functionality before > MVC as the headers have to be applied before MVC completes the request.

<= Even though my app didn't call UseMVC(), moving UseCors() to the top fixed the problem

To expand on user8266077's answer, I found that I still needed to supply OPTIONS response for preflight requests in .NET Core 2.1-preview for my use case:

and then enabled the middleware like so in Startup.cs

In my case, I was using https redirection just before adding cors middleware and able to fix the issue by changing order of them

What i mean is:

By the way, allowing requests from any origins and methods may not be a good idea for production stage, you should write your own cors policies at production.

None of the above procedures helped and I then read article which solved the issue.

Below is the code.

and on the top of my actionmethod

It could also be that the data your sending to the API is wonky,

then in your data: object change it to

I think if you use your own CORS middleware you need to make sure it is really CORS request by checking origin header.

and then, in configure method, before app.UseMvc() add:

Worked for me and how the docs say to do it:

Based on your comment in MindingData's answer, it has nothing to do with your CORS, it's working fine.

For later one check existence of [Produces("...")]attribute on your action

For me, it had nothing to do with the code that I was using. For Azure we had to go into the settings of the App Service, on the side menu the entry "CORS". There I had to add the domain that I was requesting stuff from. Once I had that in, everything was magic.

I'm using .Net CORE 3.1 and I spent ages banging my head against a wall with this one when I realised that my code has started actually working but my debugging environment was broken, so here's 2 hints if you're trying to troubleshoot the problem:

In my case character / at the end of my origin name was causing an issue.

Solution that worked out for me in .NET Core 3.1:

The solution that worked for me in ASP.NET Core 3.1:

and then change the following:

Then program worked and error was solved.

For me the solution was to correct the order:

I got MindingData's answer above to work, but I had to use Microsoft.AspNet.Cors instead of Microsoft.AspNetCore.Cors. I am using .NetCore Web Application API project in Visual Studio 2019

will allow you to do CORS with built-in features, but it does not handle OPTIONS request. The best workaround so far is creating a new Middleware as suggested in a previous post. Check the answer marked as correct in the following post:

Simple and easy way to do it.

Here is how I did this.

Here are the steps.

In Startup.cs inside the ConfigureServices add the following code.

If you want to apply all over the project then add the following code in Configure method in Startup.cs

If you want to add it to the specific controllers then add enable cors code as shown below.

For more info: see this

Use a custom Action/Controller Attribute to set the CORS headers.

Then on the Web API Controller / Action:

I was using blazor webassembly as client and asp.net web api core as backend and had cors problem too.

I found solution with these code:

and my Configure method:

change http://example.com with your client domain or ip address

below is the settings which works for me: 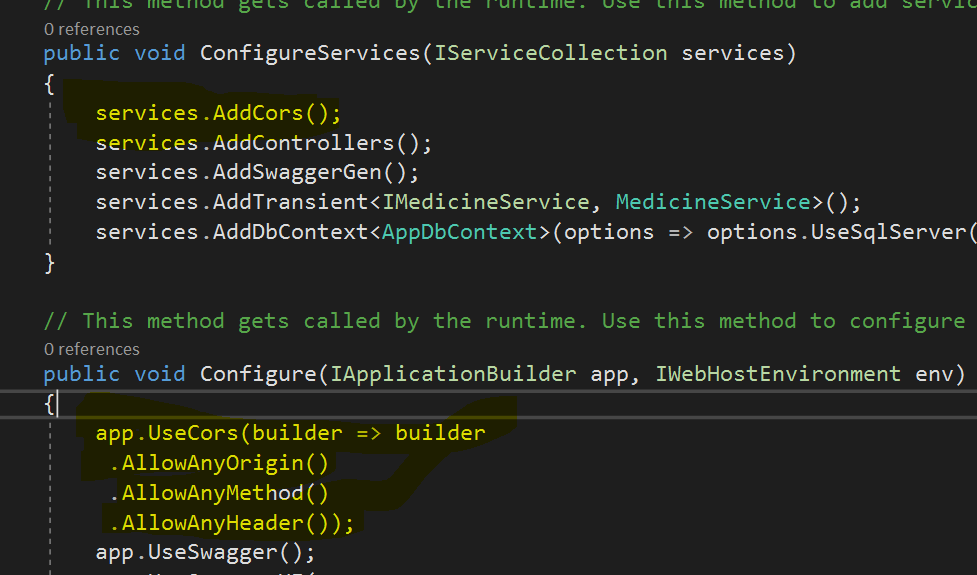 Not the answer you're looking for? Browse other questions tagged c# rest asp.net-core cors cross-domain or ask your own question.

0
how to enable CORS in ASP.NET MVC Controller Level in WEB API?
75
How to fix “The CORS protocol does not allow specifying a wildcard (any) origin and credentials at the same time” error
44
Enable OPTIONS header for CORS on .NET Core Web API
12
Asp.net Core CORS works with GET but not wit POST
5
ASP.NET Core Web Api sending Access-Control-Allow-Origin: null CORS header and chrome is erroring, how to fix?
6
NET5.0 Blazor WASM CORS client exception
3
415 error Web Api POST from Angular
2
No 'Access-Control-Allow-Origin' header is present Angular 6 with Asp.net Core 2.1
0
Angular 4 with ASP.NET Core 2.0 is giving back 401 error on JWT (CORS)
0
How can I get my C# API to respond to a POST request from my React app? (CORS issue)
See more linked questions