UIApplication.registerForRemoteNotifications() must be called from main thread only

Xcode 9 (iOS 11) showing me an error/warning while registering for Push (remote) notification.

And here is code, I've tried:

How to resolve this?

You can solve this issue with

Hope this will help...

For Objective C, the below code works

TL;DR:
All UI manipulations should be done in the Main Thread to avoid problems. If failed to do so, Main Thread Checker (Newly introduced debugging feature in Xcode 9) will produce issues at Runtime. So wrap your code in Main Thread block like below to avoid glitches and runtime warnings.

In Xcode releases before ver. 9, the warnings related to main thread would get printed in the console area textually. Anyway, you can optionally disable (not a recommended approach) the Main Thread Checker in the Diagnostic settings in Edit Scheme.

Apple introduced a new debugging option in Xcode 9 for checking issues at Runtime for UIKit and other API's that manipulate UI elements. If there's any change to the UI elements from UIKit API at Runtime, without a Main thread block, it is highly likely to cause UI glitches and crashes. The Main Thread Checker is enabled by default to catch those issues at runtime. You can disable Main Thread Checker in the Edit Scheme window just like below, although it is not really recommended to do so: 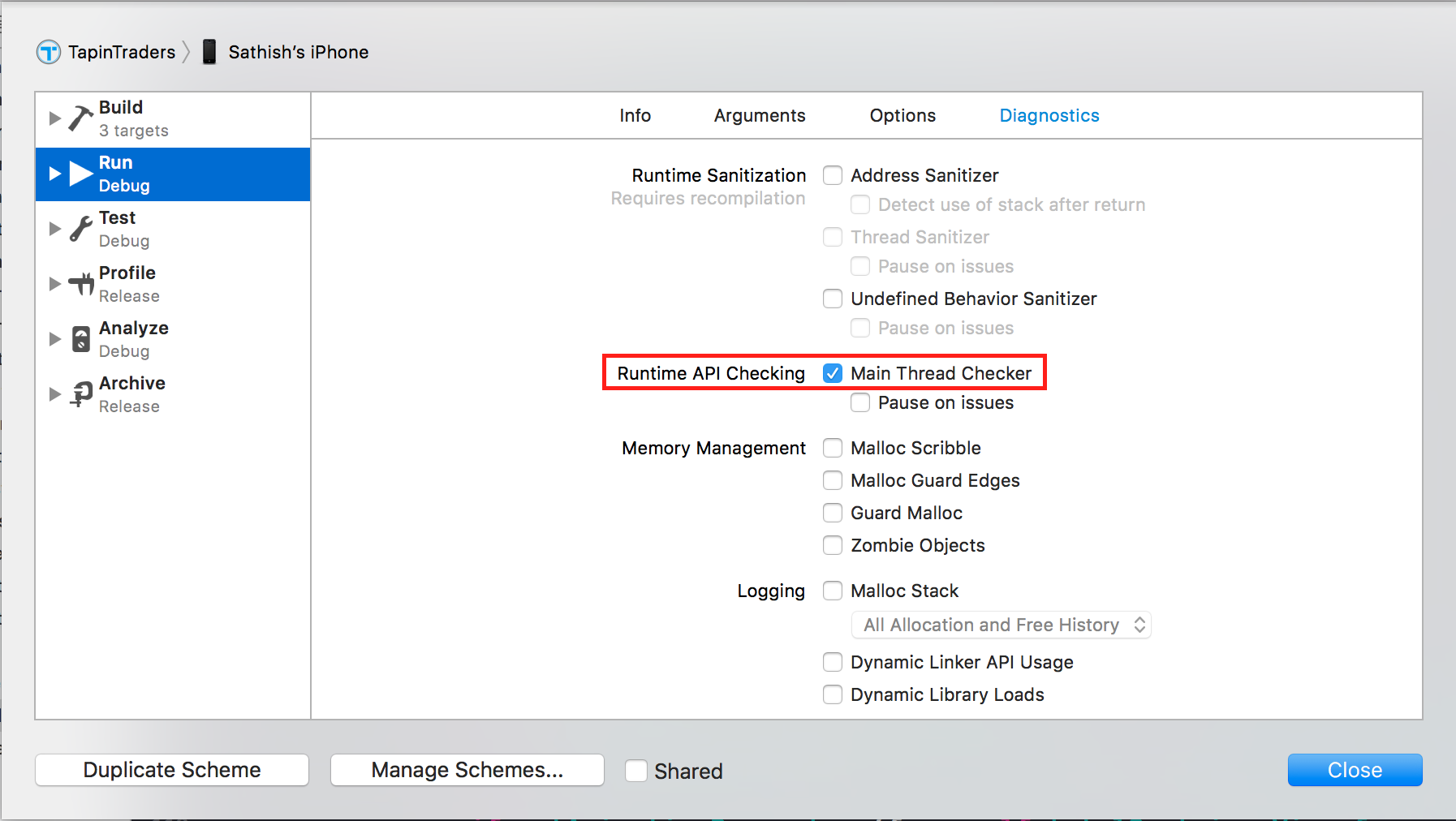 If you have any older SDK's or Frameworks, when updating to Xcode 9, you may face this warning since some of the UIKit method calls wouldn't have been wrapped in Main Thread. Updating them to latest version would fix the issue (if the developer is aware of it and fixed it).

The error message is pretty clear: dispatch registerForRemoteNotifications to the main thread.

I would use the granted parameter and handle the error accordingly

This is also correct way to do in Swift 4.0

Hope this will help

This is what worked for me. Courtesy of @Mason11987 in the accepted comment above.

Not the answer you're looking for? Browse other questions tagged ios swift push-notification swift4 unusernotificationcenter or ask your own question.

0
Push notification “Don't allow” button action is not behaving as expected in my application
129
Displaying a stock iOS notification banner when your app is open and in the foreground?
0
How to send extra data with SINManagedPush like “badge” and “sound” value?(iOS SDK)
1
Sinch IOS instant message push notification with sound and badge
2
How to handle iOS remote notification while app is in background
2
UNNotificationAction not showing in remote notification
0
TabItem with BadgeValue only shows up when I launch the app from the notification trigger
0
How IOS apps like Gmail update(decrement) badge counter without push notificatons