iOS 11 prefersLargeTitles not updating until scroll

I implemented a basic UIViewController with a UITableView that's wrapped in a UINavigationController. I set prefersLargeTitles to true:

However, the title stays small until I scroll the view, at which point it enlarges. I tried moving that call to where I create the UINavigationController, but there was no effect. I am sure the navigationController is not nil when I set prefersLargeTitles.

Should I be updating that property elsewhere? Or should I file a Radar? 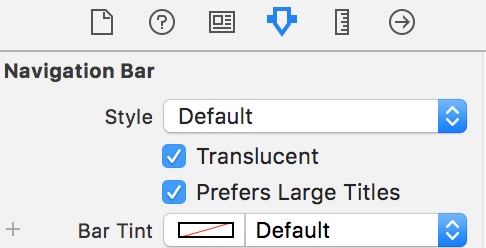 I recently hit the same issue and none of the suggestions worked for me. Instead, all I needed to do was to invoke sizeToFit(). Sample code:

I had the same issue only on one tableview ...

so that my tableview stop scrolling when uiviewcontroller was loaded.

For me the only working solution is:

Modifying the contentInset of the tableView with top:1 will force the NavigationBar to expand and display the large titles.

Note: If you have a tableView.reloadData() in your viewWillAppear make sure to call it after editing the contentInset

I ran into the same issue and found that it’s usually best to set the prefersLargeTitles property from the view controller or object that sets it up, and to do so before it is presented.

For instance, if the view controller in question is shown upon app launch:

or if presenting a particular view controller:

I found this method to be a more sure-fire way to ensure that the navigation title is displayed accordingly. Hope this helps! :)

I have wasted some considerable amount of time on this as prefersLargeTitle saga works on some view controllers as expected and with some it produces the same issue above.

Solution for me was to uncheck Extended Edges Under Top Bars in IB - for those view controllers who show large title momentarily until the contents of the table view are loaded then navigation bar jumps back up to regular size. It only shows the large title when scrolling the table view down.

This is backward compatible with iOS 10 and does not leave any empty space above the first row in the table view.

I had checked prefersLargeTitle on the navigation controllers attributes inspector only in IB - nothing in code. Same for largeTitleDisplayMode = .always

As for why this happens with some view controllers and not others, I have absolutely no idea!

my view contains tableView and prefersLargeTitles is not updating until scroll, I fixed it by setting 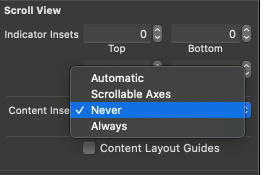 In the storyboard I set the Navigation Item's Large Title to Never. 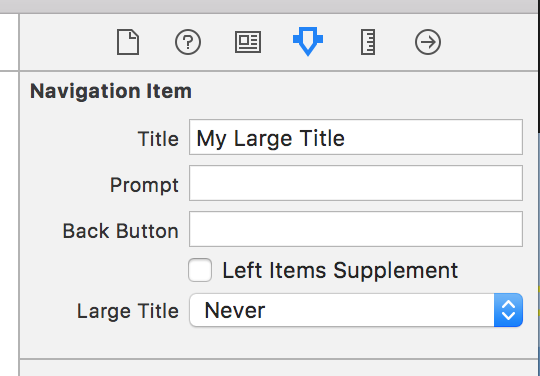 In my ViewController's viewDidLoad method I set the following:

In iOS 11, this also works fine when you run the existing Swift 3 app.

However, with the Swift 4 app, running on iOS 11, I was seeing the same symptoms you described (large titles only appear when you pull/scroll the view down).

Anyway, that fixed the issue for me.

I’ll file radar as this looks like a Swift 4-based regression as, for me, it works both in iOS 10 with Swift 3 and in iOS 11 with Swift 3.

General changing the behaviour of the navigationBar should be done in viewWillAppear(_:)

After doing that it worked fine for me.

I solved this issue via storyboard

I think It does seem a little bit dummy but I effectively solved the problem with this:

It's like navigationBar needs a sort of update in one of its elements to update the layout.

Sometimes to update something in navigationBar I need to hide and unhide it.. That's why I think there is a best way to do it.. For the moment that's my workaround.

Make sure your tableView has beed previously added to your view.

Anchoring tableView to the safeAreaLayoutGuide didn't work out for me, largeTitleDisplayMode couldn't be other then .never

So I managed to fix it by calling self.navigationController?.view.setNeedsUpdateConstraints in the top presented controller's viewDidAppear(animated:) function, or scheduling this call for the next run loop in viewWillAppear(animated:), like:

In this case, navigation bar appeared with the correct content and size along with presenting transition, instead of popping in after transition was completed

That does seem like a weird behavior at first, but try setting the navigationItem.largeTitleDisplayMode to always. The default is automatic - and it's not defined how that works in the docs.

Also wrote / will update an answer about large titles here.

I had the similar issue. The view is a table view. The property of prefersLargeTitles is set at viewDidLoad event. Then I set view's title in viewWillAppear event.

In my prepare segue event, I set navigation item's tile to nil so that the next view left navigation var item displays "Back" automatically.

The first time the table view displays large title correctly. However, if I select a row to next view and back to the table view, the navigation item's title becomes empty.

After several hours' struggling, I finally find out that the view's title should be set in viewDidAppear event! It seems that whatever set to view's title in Will event would be reset by UIKit internally back to nil. So it has to be set in a different event.

Before I introduced this iOS 11 new feature, my app runs OK. It seems that the new feature has some changes in UIKit so that the previous version app may need some updates/changes to make it work.

I had the same issue and fixed it by changing order of views in my ViewController in InterfaceBuilder.

Also, I am not completely sure in this but looks like Navigation Bar appearance in standard or Large Title mode depends on views hierarch of previous Controller.

Similar issue for me with a UITableViewController added to a UIViewController. In my instance, these view controllers are themselves embedded in a UITabBarController and only the first tab displayed correctly used a large title. Other tabs required a manual scroll before the large title was displayed.

The only thing I could get to work was adjusting the contentInset as per @pau-senabre's answer, except I the top inset wasn't helpful for me. Instead, I set the left inset and then reset it on the next runloop.

One more possible solution is to end refresh in your refreshHandler(). like this-

Tried adding prefersLargeTitles = true to viewWillAppear and viewDidLoad, but neither fixed my issue.

What worked for me is setting the self.navigationController?.navigationBar.prefersLargeTitles = true before calling tableviews reload method.

I had originally set tableView.tableFooterView = UIView() to get rid of extra separators after the last cell. Setting the footer view to nil fixed the scrolled-up navigation title.

I had same issue.

I have set below code in viewdidload method. and it get fixed.

Not the answer you're looking for? Browse other questions tagged ios swift cocoa-touch uinavigationcontroller uikit or ask your own question.

62
Use the increased navigation-bar title in iOS 11
19
Shrink large title when scrolling (not UITableViewController) iOS 11
1
How to get the navigation bar to show large title upon a segue back?