I created a script to output Get-NetTCPConnection data but additionally show Process Name and Username. The script does work, but I would love any tips to simplify or make this more canonical.

I am wondering if there is a more efficient way to add the ProcessName and Username to the output without having to preload the values into the custom PSObject ($obj array). I am concerned that the custom e={($obj |? PID -eq $_.OwningProcess | select -ExpandProperty UserName)}} expression is overly complex.

Here's a screenshot with some sample output: 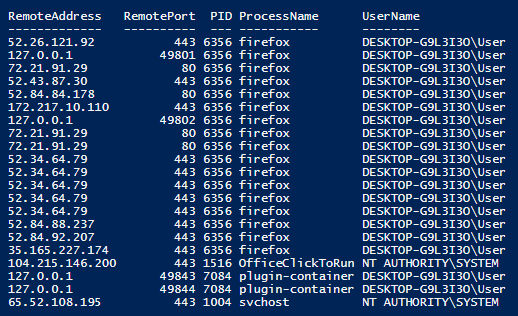 I can't take credit for this solution, I found it here: https://superuser.com/questions/1215093/powershell-one-liner-to-show-process-on-same-line-as-port-using-netstat-issue/1215237

is not a great one, because += on an array does a lot of in-memory copying of everything to a new array, so it can be surprisingly slow. foreach() {} can sometimes run faster than | ForEach-Object {} but if you have a pipeline inside the () part and array addition going on, it's possibly not going to make much difference there. Typical alternatives:

The first half of your script does approximately nothing:

Original: process objects in an array.

Result: tweaked process objects in an array, changed, but not meaningfully so given the way you use them.

So you could drop all that for just $obj = Get-Process -IncludeUsername and it would work the same.

But if you want pre-processing to make the rest of the script nicer, use a hashtable, then the lookup in the second part becomes shorter and clearer:

Anyway, now this comes out as the same answer as @avvi, I had to stop with it written but broken because I couldn't make it work until I saw their answer - Get-Process returns the Id as a number and Get-NetTCPConnection returns the OwningProcess as a string, so there needs to be a conversion for the hashtable lookup.

Posting anyway for the discussion about the looping / array building.

I couldn't find the question in Code Review, so I'm posting answer here for the moment.

Using a dictionary (hashtable) simplifies the expression and improves the lookup time per pid.

Cleaner than clean. Add the back tick (`) at the end of each line or remove carriage returns and put on one line. Backticks here seem to throw off the formatting such that you have to add two backticks (``) to keep the formatting.

Not the answer you're looking for? Browse other questions tagged windows powershell netstat or ask your own question.