How can I find pending commits between two branches excluding already cherry-pick/merged changes?

Simple Scenario: I have few commits on git branch A which was forked from master some time back. I would like to find out all pending commits that need to be merged back to master. Following command gives me list of these commits. $git log --cherry --oneline master..A

Now, in bit more complex scenario, I have another branch B which was also forked from master and has few commits that I would now like to integrate back to the master. However, couple of my developers have already cherry picked some of these commits onto their "private" branches (say, b1,b2,b3 - all forked from Branch B) and then, they have also cherry picked these commits from their private branches to the master (with new commit-hashes, that are different from original commit hashes on the 'B' branch). So, ideally, these need not be re-merged onto the master because they already have been merged on the master (just via different route of cherry-picks).

My question is: Is there any git command that can tell me what commits from B are still pending to be merged? I really DO NOT want to see commits that have been merged to master via some other (i.e., private, b1,b2,b3) branches. I am assuming that git is smart to know that the commit despite not being directly merged, may have been merged as part of cherry picking via other multiple branches.

In this graphical scenario, I'd like git command to show me that 3 commits (c7,c8 and c9) are still pending to be merged to master. 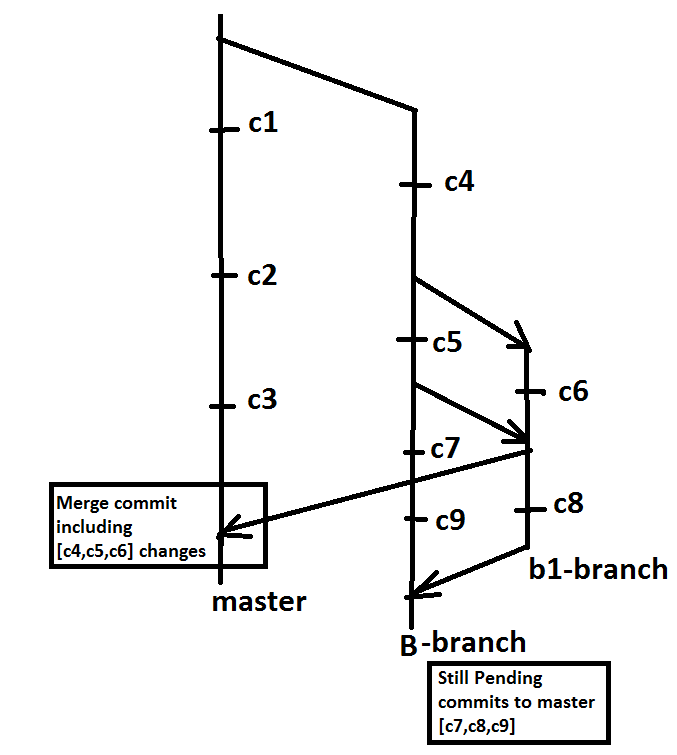 It lists all the commits that are on B-branch but not on master with a leading + mark each line. If the line starts with a - mark, the following commit (of B-branch) has an equivalent commit on master (via rebase or cherry-pick), which can be ignored.

If you want to see the differences between the branches, I suggest that you see this command that you show it in a friendly way.

Not the answer you're looking for? Browse other questions tagged git git-merge git-diff git-log or ask your own question.

26
How to list branches that contain an equivalent commit

3881
Undoing a git rebase
1665
How can I selectively merge or pick changes from another branch in Git?
2274
Showing which files have changed between two revisions
2438
How to list only the names of files that changed between two commits
1278
How to cherry-pick multiple commits
787
How to cherry-pick a range of commits and merge them into another branch?
2507
What is the best (and safest) way to merge a Git branch into master?
2846
Git fetch remote branch
2780
How can I see the differences between two branches?
1334
Git merge hotfix branch into feature branch