'Newtonsoft.Json' already has a dependency defined for 'Microsoft.CSharp'

I'm installing NewtonSoft.Json for parsing Json in .NET application. When I'm using Visual Studio(VS) 2012, it can not be installed via NuGet. This is the error I have got:

I tried to copy the DLL over and just use it, seems like some dependencies screwed up in this version (10.0.2).

After few hours research, finally I've found out it is the problem of the compatibility of VS2012 and Newtonsoft Json 10.0.2.

because NuGet Package Manager (Version 2.8.60318.667) for VS 2012 does not support .NETStandard (Used for Latest Newtonsoft Json Parser Lib. https://github.com/NuGet/Home/issues/3131

I resolve this issue by installing older version of Newtonsoft Json:

From the release notes for v3.4: https://docs.microsoft.com/en-us/nuget/release-notes/nuget-3.4

This version of NuGet comes with VS2015 Update 2

I had the same issue using VS2015 and creating a NuGet package with dependency on Newtonsoft.Json version=10.0.3. I used the approach suggested by Vin.X in his answer as the work around.

After installing Newtonsoft.Json version=9.0.1 into your project, add following description in your .nuspec file.

Application that consumes your package will install Newtonsoft.Json version=10.0.3 along with your package as a dependency into your project.

Try removing existing version of package from solution package directory and then try the following command. It worked for me.

This question isn't specifically about TFS/Azure Devops, but I ran into the exception in the title this morning, and my resolution gets around having to downgrade versions.

We updated Visual Studio on our build servers and all of our builds broke.

Below are the versions I'm currently targeting:

We found that we needed to add a task called NuGet Tool Installer in the beginning of our task list to force it to use version 5.4.0 because auto-discovery was selecting an older version and failing.

Once this was functional, and packages restored, it failed to package our source for distribution. So we have the latest NuGet.exe, .NET Framework reference of NewtonSoft.Json (i.e. not netstandard), but still it wasn't working. We were using NuGet Packager previously, and I'm not entirely sure when the task became deprecated, but it was still functional for us until the VS updates. There is a new task called NuGet which has a drop down for the different features. 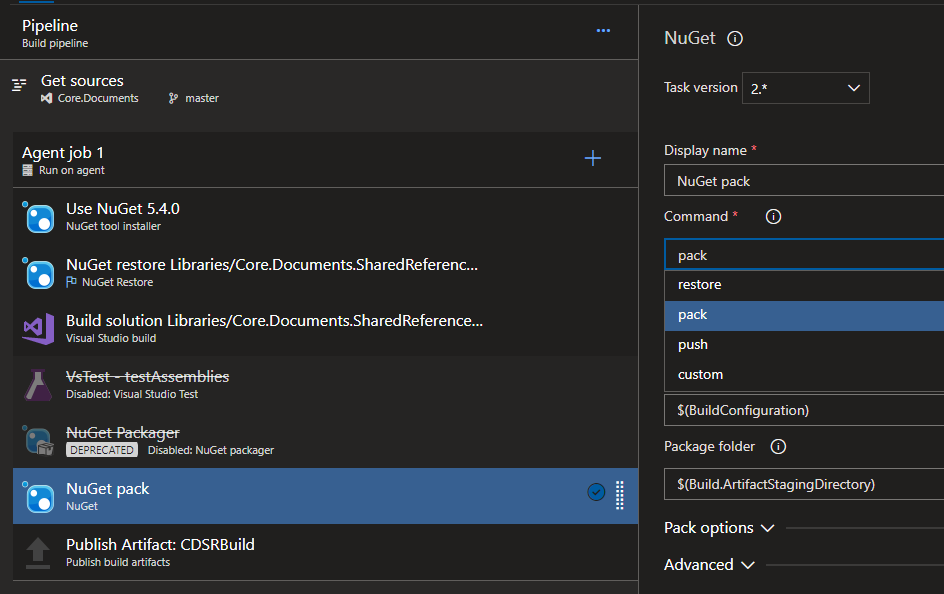 Selecting Pack, and configuring the fields to mimic what the deprecated task had led to a successful build.

Not the answer you're looking for? Browse other questions tagged .net json.net jsonparser or ask your own question.