Create a branch in Git from another branch

I have two branches: master and dev

I want to create a "feature branch" from the dev branch.

Currently on the branch dev, I do:

But, after visualizing my branches, I got:

I mean that the branch seems ff merged, and I don't understand why...

Can you explain me please how you branch off from another branch and push back to the remote repository for the feature branch?

All that in a branching model like the one described here.

If you like the method in the link you've posted, have a look at Git Flow.

It's a set of scripts he created for that workflow.

But to answer your question:

Creates MyFeature branch off dev. Do your work and then

Now merge your changes to dev without a fast-forward

Now push changes to the server

And you'll see it how you want it.

If you want create a new branch from any of the existing branches in Git, just follow the options.

First change/checkout into the branch from where you want to create a new branch. For example, if you have the following branches like:

So if you want to create a new branch called "subbranch_of_b1" under the branch named "branch1" follow the steps: 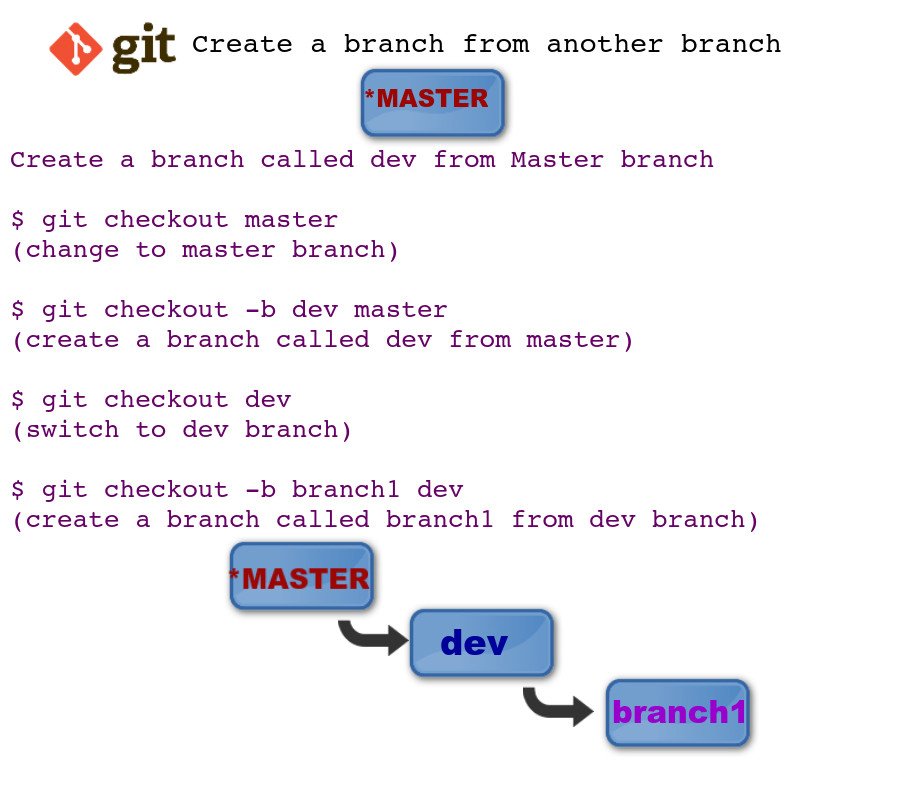 push the subbranch_of_b1 to remote

Branches that are completely included

Various ways to create a branch in git from another branch:

This answer adds some additional insight, not already present in the existing answers, regarding just the title of the question itself (Create a branch in Git from another branch), but does not address the more narrow specifics of the question which already have sufficient answers here.

I'm adding this because I really needed to know how to do #1 below just now (create a new branch from a branch I do NOT have checked out), and it wasn't obvious how to do it, and Google searches led to here as a top search result. So, I'll share my findings here. This isn't touched upon well, if at all, by any other answer here.

While I'm at it, I'll also add my other most-common git branch commands I use in my regular workflow, below.

1. To create a new branch from a branch you do NOT have checked out:

The general format is:

2. To create a new branch from the branch you DO have checked out:

This is great for making backups before rebasing, squashing, hard resetting, etc.--before doing anything which could mess up your branch badly.

Ex: I'm on feature_branch1, and I'm about to squash 20 commits into 1 using git rebase -i master. In case I ever want to "undo" this, let's back up this branch first! I do this ALL...THE...TIME and find it super helpful and comforting to know I can always easily go back to this backup branch and re-branch off of it to try again in case I mess up feature_branch1 in the process:

The 20200814-1320hrs part is the date and time in format YYYYMMDD-HHMMhrs, so that would be 13:20hrs (1:20pm) on 14 Aug. 2020. This way I have an easy way to find my backup branches until I'm sure I'm ready to delete them. If you don't do this and you mess up badly, you have to use git reflog to go find your branch prior to messing it up, which is much harder, more stressful, and more error-prone.

git switch was added recently in Git v2.23. See your git version with git --version. It is designed to be an extremely limited form of git checkout, designed only to switch branches rather than also having the ability to check out or restore files, like git checkout can do. Read more here: https://www.git-tower.com/learn/git/commands/git-switch.

See also: What does git checkout still do after git switch got introduced?. git restore offers some of the rest of the functionality of git checkout which git switch does not contain.

THIS COMMAND IS EXPERIMENTAL. THE BEHAVIOR MAY CHANGE.

So, feel free to stick with git checkout if you like. Its behavior is not likely to change.

I pretty much just use git checkout myself, but you are welcome to use git switch (and git restore to restore or "check out" files) if you like.

3. To create and check out a new branch from the branch you DO have checked out:

To make it obvious what is happening there, know that this one command above is equivalent to these two separate commands:

4. To create and check out a new branch from a branch you do NOT have checked out:

To make it obvious what is happening there, know that this one command above is equivalent to these three separate commands:

5. To rename a branch

Just like renaming a regular file or folder in the terminal, git considered "renaming" to be more like a 'm'ove command, so you use git branch -m to rename a branch. Here's the general format:

OR, if you already have branch_1 checked out, you can rename the currently-checked-out branch to branch_1.5 like this:

To create a branch from another branch in your local directory you can use following command.

Creating a new branch from an existing branch as of git 2.23:

Switched to a new branch 'my-new-branch'

Take a look at this Github blog post explaining the changes in greater detail:

Git 2.23 brings a new pair of experimental commands to the suite of existing ones: git switch and git restore. These two are meant to eventually provide a better interface for the well-known git checkout. The new commands intend to each have a clear separation, neatly divvying up what the many responsibilities of git checkout

Do simultaneous work on the dev branch. What happens is that in your scenario the feature branch moves forward from the tip of the dev branch, but the dev branch does not change. It's easier to draw as a straight line, because it can be thought of as forward motion. You made it to point A on dev, and from there you simply continued on a parallel path. The two branches have not really diverged.

Now, if you make a commit on dev, before merging, you will again begin at the same commit, A, but now features will go to C and dev to B. This will show the split you are trying to visualize, as the branches have now diverged.

If you want to make a branch from some another branch then follow bellow steps:

This command will create a new branch in your local with same branch name.

For creating a branch from another one can use this syntax as well:

Its worked for me:

Go to your github repository and select the branch name from where you want to create a new branch,as shown in below image 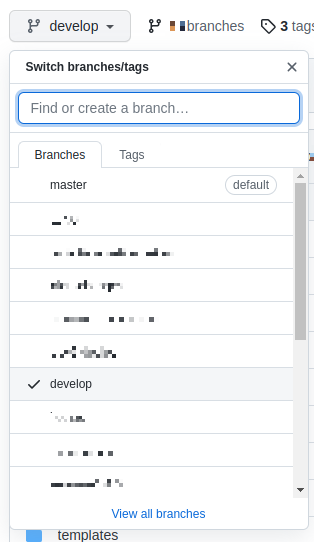 then type the branch name you want to create, and click on create branch. 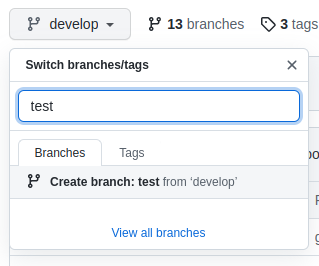 Switch to the develop branch:

merge the changes to develop without a fast-forward

Now push changes to the server

Not the answer you're looking for? Browse other questions tagged git git-branch git-workflow git-flow or ask your own question.

1803
How to get just one file from another branch?
1289
How to cherry-pick multiple commits
1024
How to copy commits from one branch to another?
244
How can I push a local Git branch to a remote with a different name easily?
214
Who is "us" and who is "them" according to Git?
15
Create new branch based on current branch to work on a new feature
17
git - list of all changed but not deleted files in a commit
9
What does git checkout still do after git switch got introduced?
2
What Happens To Child Branches If You Merge The Parent Branch Into Master?
-1
Is it possible to create GitHub branch like master:master-1?
See more linked questions