I need to retrieve the position and attitude angles of a camera (using OpenCV / Python).

Attitude angles are defined by:

Roll being if the camera is tilted left or right when in your hands (so it is always looking at a point on the horizon when this angle is varying): +45° = tilted 45° in a clockwise rotation when you grab the camera, thus +90° (and -90°) would be the angle needed for a portrait picture for example, etc.

My world reference frame is oriented so:

My world objects points are given in that reference frame.

According to the doc, the camera reference frame is oriented like that: 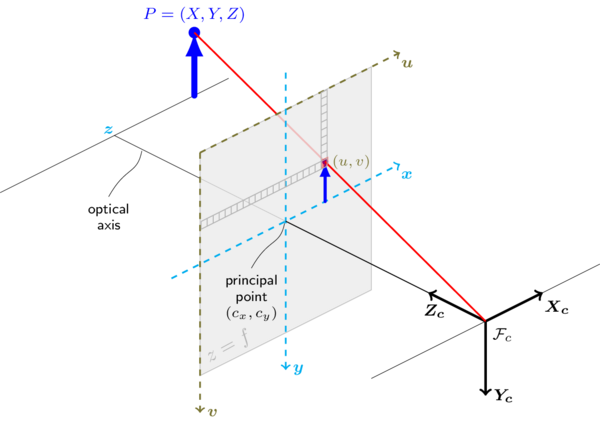 Now, from cv2.solvepnp() over a bunch of images points and their corresponding world coordinates, I have computed both rvec and tvec.
But, according to the doc: http://docs.opencv.org/trunk/d9/d0c/group__calib3d.html#ga549c2075fac14829ff4a58bc931c033d , they are:

these vectors are given to go to the camera reference frame.
I need to do the exact inverse operation, thus retrieving camera position and attitude relative to world coordinates.

So I have computed the rotation matrix from rvec with Rodrigues():

And if I'm right here, the camera position expressed in the world coordinates system is given by:

But how to retrieve corresponding attitude angles (yaw, pitch and roll as describe above) from the point of view of the camera (as if it was in your hands basically)?

I have tried implementing this: http://planning.cs.uiuc.edu/node102.html#eqn:yprmat in a function:

But results are not consistent with what I want. For example, I have a roll angle of ~ -90°, but the camera is horizontal so it should be around 0.

Pitch angle is around 0 so it seems correctly determined but I don't really understand why it's around 0 as the Z-axis of the camera reference frame is horizontal, so it's has already been tilted from 90° from the vertical axis of the world reference frame. I would have expected a value of -90° or +270° here. Anyway.

Did I miss something with the roll angle?

I think your transformation is missing a rotation. If I interpret your question correctly, you are asking what the inverse of (rotation by R followed by translation T)

The inverse should return the identity

Working this through yields

Not the answer you're looking for? Browse other questions tagged python opencv3.0 opencv-solvepnp or ask your own question.

5343
How to execute a program or call a system command from Python
1987
How to randomly select an item from a list?
1784
How to remove an element from a list by index
1722
Delete an element from a dictionary
2217
How can I remove a key from a Python dictionary?
2570
How do I select rows from a DataFrame based on column values?
0
using aruco to estimate the world position of camera