Why is UTC (which is not a time zone) considered a time zone in Java (and not only there)?

Given that UTC is not a time zone, but a time standard (as stated, for example, here), why in my Java application I can use UTC as if it was a time zone (see the code snippet below)?

If UTC is not a time zone, why is TimeZone.getTimeZone("UTC") able to return the time zone object?

By the way, on my Windows machine UTC is in the list of time zones also (see the screenshot).

Is the statement "UTC is not a time zone" in reality wrong? 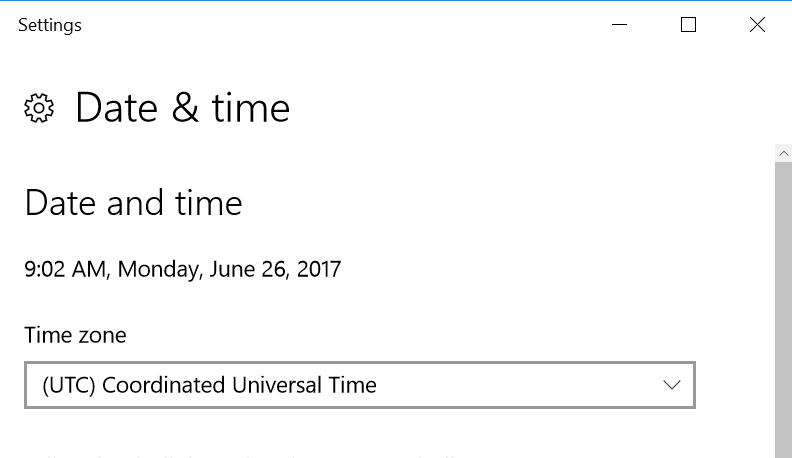 Because it makes life much, much simpler to regard UTC as a time zone than to treat it as something else, basically.

It's one of those "Yeah, strictly speaking it's not" scenarios. For everything except "Which region of the world is this observed?" you can think of UTC as a time zone and it works fine. So it's simpler to bend it slightly out of shape than to have a whole separate concept.

If you view a time zone as a geographical region along with that mapping, then no, it doesn't work as well - but that's more rarely useful in software. (And you can always fake it by saying it's an empty region :)

Is the statement "UTC is not a time zone" in reality wrong?

Technically and strictly speaking, the statement is not wrong. UTC is a standard, not a timezone (as you already linked).

A timezone corresponds to some region in the world and has lots of different rules regarding that region:

While the timezone keeps track of all of these changes, UTC has no such rules. You can think of UTC in many different ways:

As the "offset of UTC" (not sure how technically accurate is this term) is always zero, it's common to write is as UTC+00:00 or just Z.

Another difference between UTC and timezone is that a timezone is defined by governments and laws and can change anytime/anywhere. All the changes in Acre described above were defined by politicians, for whatever reasons they thought at that time. (So, even if a region today follows UTC in their timezone, there's no guarantee that it'll stay the same in the future, and that's why even those regions have their own timezones, even if they look redundant).

But no matter how many times politicians change their regions offsets, they must be relative to UTC (until a new standard comes up, of course).

Now, when you see implementations like TimeZone.getTimeZone("UTC"), you can think of it in 2 different ways:

The new java.time API, though, separates the concepts in 2 classes: ZoneRegion and ZoneOffset (actually both are subclasses of ZoneId, but ZoneRegion is not public so actually we use ZoneId and ZoneOffset):

So, the ZoneId (actually ZoneRegion) is consistent with the idea that offsets in some region (in some timezone) change over time (due to DST rules, politicians changing things because whatever, etc). And ZoneOffset represents the idea of difference from UTC, that has no DST rules and never changes.

And there's the special constant ZoneOffset.UTC, which represents a zero difference from UTC (which is UTC itself). Note that the new API took a different approach: instead of saying that everything is a timezone and UTC is special kind, it says that UTC is a ZoneOffset which has a value of zero for the offset.

You can still think it's a "wrong" design decision or a simplification that makes things easier (or a mix of both). IMO, this decision was a great improvement comparing to the old java.util.TimeZone, because it makes clear that UTC is not a timezone (in the sense that it has no DST rules and never changes), it's just a zero difference from the UTC standard (a very technical way of saying "it's UTC").

And it also separates the concepts of timezone and offset (that are not the same thing, although very related to each other). I see the fact that it defines UTC as a special offset as an "implementation detail". Creating another class just to handle UTC would be redundant and confusing, and keeping it as a ZoneOffset was a good decision that simplified things and didn't mess the API (for me, a fair tradeoff).

I believe that many other system's decide to take similar approaches (which explains why Windows have UTC in the timezone list).

Not the answer you're looking for? Browse other questions tagged java windows timezone utc timezone-offset or ask your own question.

4
How to Pick Timezone from ISO 8601 format String into a Calendar instace
2
In Java, Can I Convert A Date and Time To An ISO 8601 formatted String Without A Timezone?
2
JSTL timezone (KST) implementation error found

326
Convert UTC/GMT time to local time
598
How do I get current date/time on the Windows command line in a suitable format for usage in a file/folder name?
543
How can I get the current date and time in UTC or GMT in Java?
855
Getting the client's time zone (and offset) in JavaScript
719
Why is Java Vector (and Stack) class considered obsolete or deprecated?
27
Before writing a Java Date to an SQL TIMESTAMP column, does JDBC translate the date from the JVM time zone to the database session time zone?
705
How to make a timezone aware datetime object
1
Java TimeZone and shortcuts for time-zone names issue
9
Java does not produce correct time zone information