Silent pushes not delivered to the app on iOS 11

I noticed that on iOS 11 beta 2, the silent notifications are not delivered to the application:didReceiveRemoteNotification:fetchCompletionHandler regardless the state of the app (background / foreground).

I implemented the UIApplicationDelegete method application:didReceiveRemoteNotification:fetchCompletionHandler and I send the following silent push

but the delegate method is not called on iOS 11.

It works fine on other versions of iOS and the documentation section Configuring a Silent Notification does not mention that anything else should be done.

Please note that I'm not talking about or using the UserNotification framework which should not be needed for sending silent pushes.

When you lunch the sample project and send a above payload to the app, you can use the macOS console to see that the push is correctly delivered to the device but not to the app.

It appears that the behaviour is random. Sometimes after restarting the device, the payload is delivered correctly but it stops working after a while.

As you can see on the following screenshot, the push marked as 1 is delievered only to the device and the push 2 (after device restart) is also delivered to the app. 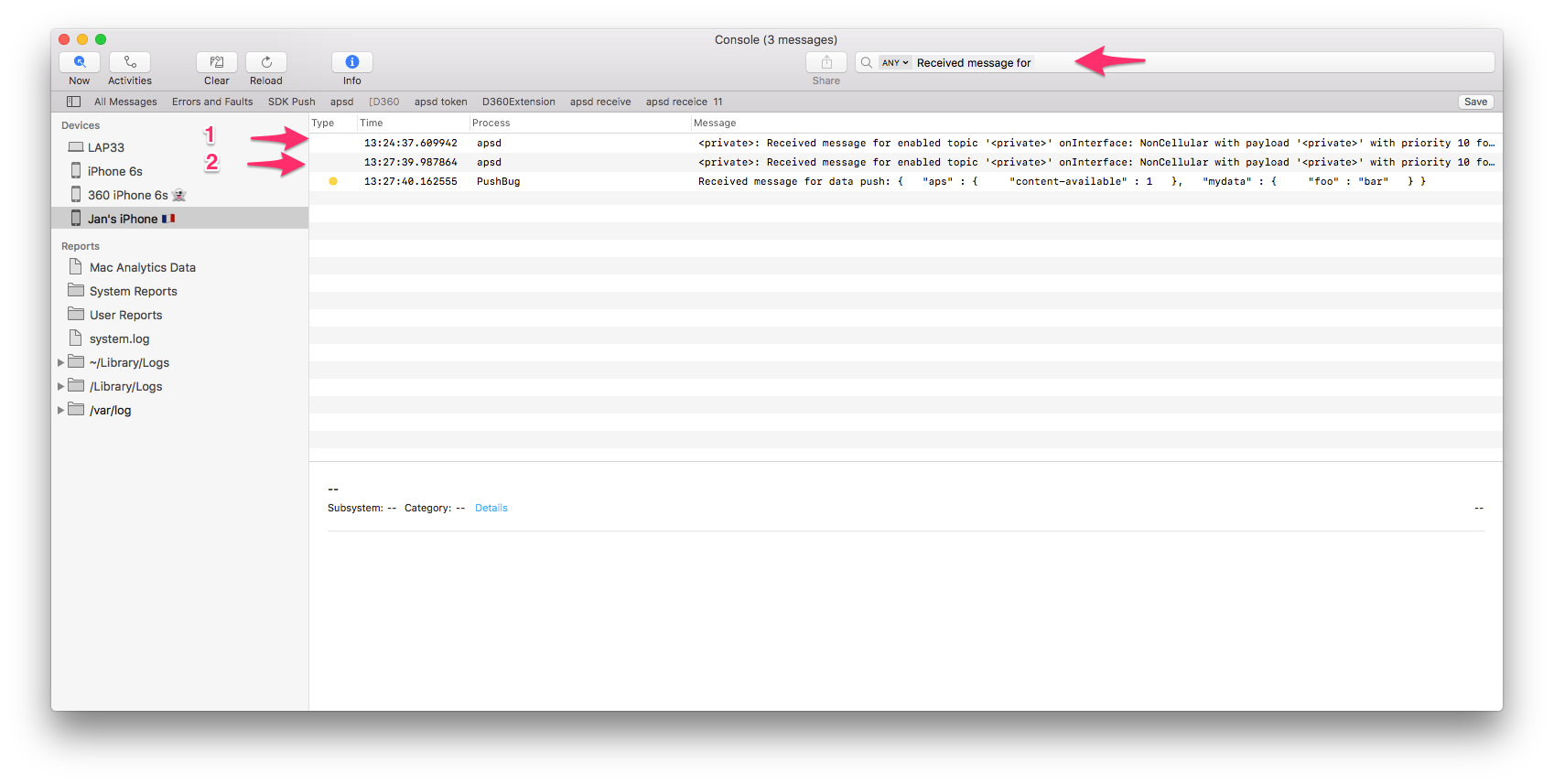 Still the same behaviour. Another thing that is supposed to work but does not is the following. When the application's scheme is set to "Wait for executable to be launched", a silent push is supposed to wake up the app and start it in background. 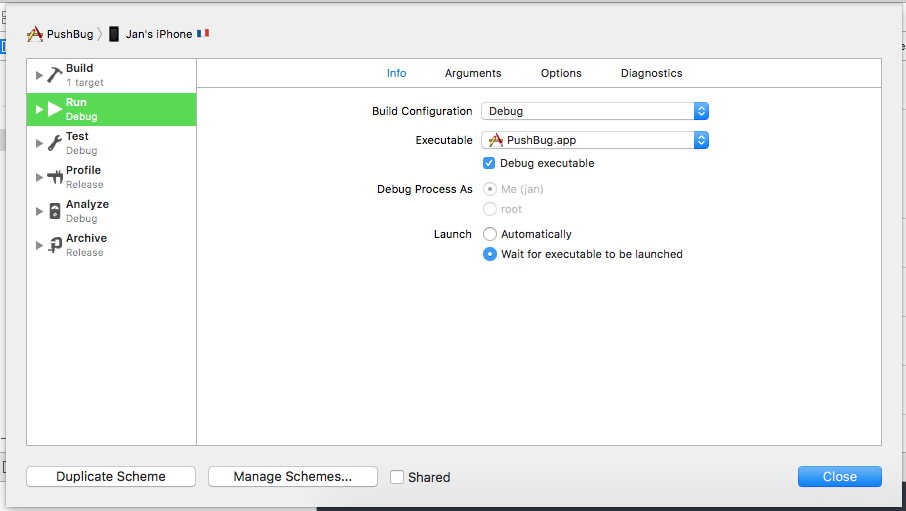 Still the same behaviour and not updates from Apple in the bug report.

Still the same problem. The steps to reproduce I use now are the following:

Expected: The app is brought from suspended state to background and the didReceiveRemoteNotification: fetchCompletionHandler is called

I'm still having the same buggy behaviour. The ticket from Apple was updated with the following answer:

We were able to get the sample app running and test the behavior. We didn’t see any issues when we tested this as described.

Pushes aren't guaranteed to arrive to the app when it is running in the background, and the logs here indicate we don't believe the app is being used enough to launch it.

We do see us delivering pushes from time to time when conditions are good.

We believe this is behaving correctly.

Thanks to kam800's comments (see below) I did more testing and came up with those observations:

There seem to be a new daemon in iOS 11 dasd DuetActivitySchedulerDaemon that either completely discards the data push or delays the data push delivery:

"Silent notifications improve the user experience by helping you keep your app up-to-date, even when it is not running."

Well in this case, the data push is completely lost and never delivered on iOS 11 while it was delivered correctly on iOS 10.

I also noticed that when the application is in the foreground and the notification is not delivered to the app, I see the following logs in the console:

I did some tests and it seems to be indeed fixed:

When I launch the app in a suspended mode and send a silent push, the app is brought back to background and the didReceiveRemoteNotification:fetchCompletionHandler delegate is called.

In the same way, when the application is in foreground and a silent push is sent, the delegate seems to be called as expected. This was randomly not working in previous iOS 11 versions so I will confirm this after more testing.

Just wanted to add my 2 cents in here as I've been hit by this issue too and I've noticed that Apple has closed several radars on this issue saying they couldn't reproduce. An interesting thing I found is that the pushes will get delivered if the app is backgrounded while it's attached to the debugger.

If I kill the debugger, unplug my phone, launch the app, and send the silent push payload I see the app NOT getting woken. I do see the in the Console log that the system cancels delivery of the payload to my app.

I've submitted a radar with a small sample app that reproduces the problem. I've also explicitly noted in the radar that the person working on my ticket must not be running the app attached to the debugger to reproduce the issue. Here's the link: https://bugreport.apple.com/web/?problemID=34461063

Hopefully this will cause some progress to be made on this issue.

Looks like a new behaviour of iOS 11. iOS 11 beta 10 provides some descriptive logs regarding this issue:

Silent notifications are not meant as a way to keep your app awake in the background, nor are they meant for high priority updates. APNs treats silent notifications as low priority and may throttle their delivery altogether if the total number becomes excessive. The actual limits are dynamic and can change based on conditions, but try not to send more than a few notifications per hour.

I keep my fingers crossed they changed that behaviour, because that would fix my app :) On the other hand, this change is good – one among many things making iPhone battery lasting longer that Android phones.

in Release Notes - will test it now.

After using our App for 2 days in "real world scenarios" it looks like there is a real improvement in this version of iOS. I am cautiously starting to believe this is fixed.

Apple Developer Relations just added a comment to my radar:

We believe this issue is resolved in the latest iOS 11.2 beta.

Please test with the latest iOS beta. If you still have issues, please update your bug report with any relevant logs or information that could help us investigate.

Issue with my code was , even though i was using content-available:1 and mutable-content:1 in push notification payload,the Background Fetch option was not turned on. But It was working perfectly till iOS 10.

After Turning Background Fetch capability ON it is working Now

I was having issues with silent pushes not arriving (from CloudKit) and I tried everything everyone has mentioned here. Then I decided to try setting a blank alertBody to my CKNotificationInfo() objects like this:

This made the pushes get sent at a higher priority (but they were still silent pushes) and I no longer got the error in my device logs that the push was being ignored.

I hope that helps someone. :)

So this is indeed a bug in iOS 11 and it's now fixed in iOS 11 beta 3. The application:didReceiveRemoteNotification:fetchCompletionHandler is now called correctly when a silent push is received both in foreground or in background.

As a workaround We're adding a "notification" key and inside a "title" with empty string as a value. This is wake up the didReceive callback in the appDelegate.

As of writing this answer I am facing the exact same issue as Bill Dunay's answer.

My requirement was to receive silent notifications when the app is in foreground and nothing when the app is in the background/not running. And my workaround was this. I do not use badges hence setting it to zero is not an issue for me.

Please note I am deliberately not using "content-available". Setting that causes the iOS optimization logic to kick in delaying/cancelling the delivery of the notification.

I have been getting the same issue for some notifications (not necessarily silent).

After reviewing all the updates and answers I am able to add two updates that may help:

In my case silent notifications was used to update ui after job was done on server site so it was pain in ass to have non relevant content in app. Because our payload for silent notification contains even title and body I implement these methods to get working notifications in active / inactive app, not charging and with Background App Refresh turned off and even in Low Power state.

To get this working I add delegate and create extension with UNUserNotificationCenterDelegate protocol and willPresent notification (iOS 10+) method, that is triggered every time with correct payload. To not show notification when app is active just call completion with badge or sound. I ended up with something like this

And to get working these states when app is in background and silent notification don't call my methods I get notifications from notification center directly in applicationDidBecomeActive by:

This may not be the actual answer for this question, just in case if anyone need to check.