Example - I tried to paste a solid blue bitmap and the two button controls have the noticeable default colored-rectangle background. 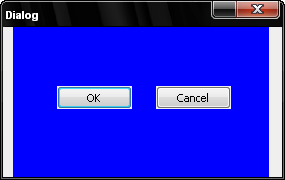 This is easily solved by providing Windows with a handle to whichever brush you want it to use to paint your button's background. You do this whenever you receive the WM_CTLCOLORBTN message in the button's parent window's message handler.

I mocked up a little demo application that compares two different buttons side-by-side. Both are standard Win32 BUTTON controls, but the one on the left handles the WM_CTLCOLORBTN message and specifies a brush with the same color as the window background. You can see the difference immediately—the light gray (or, more precisely, the default color for 3D controls, COLOR_3DFACE) fringes around the button's rectangle are gone and the button looks much better against the custom background color:

The effect also works in Windows XP with visual themes enabled—here's a screenshot of the same app:

And the code that I used to create the above effect is almost ridiculously simple. Add this to your app's main window procedure (MainWndProc), as described above. You don't need to touch your buttons.

However, make sure that the brush you specify represents exactly the same color as your window's background color—a transparent brush may not work properly. Similarly, for a patterned brush (does anyone use those anymore?), the brush's origin will need to be set to match the background.

Always make sure that you release any brushes that you create by calling DeleteObject!! In C++, you would do this by making a CBrush object (or equivalent) a member of your dialog class so that it would be automatically destroyed. In C, you'd need to handle the WM_NCDESTROY message and delete the brush manually.

Also note that you do not need to specify the BS_OWNERDRAW style in order for this trick to work. The example above uses two standard button controls, created using only the following window style flags: WS_CHILD, WS_VISIBLE, and BS_PUSHBUTTON.

Of course, if your design is any more complex than the above example (e.g., your buttons overlap multiple backgrounds), you'll probably have to go the owner-draw route, instead. I just think that's overkill for a task as simple as the one you appear to be describing.

I don't know if you can make a truly transparent background, but my solution may help you anyway. I've always solved it by using the WM_CTLCOLORBTN message in the main window's procedure.
Let's assume that we have a switch, in which we process the messages received by the main window.

As I said before, this doesn't really make the control's background transparent - it just sets it to the specified color.
EDIT: I'm sorry, I've done a mistake before. I've written LPARAM instead of LRESULT. Now it's correct.

Not the answer you're looking for? Browse other questions tagged c winapi themes or ask your own question.

108
How to make an OpenGL rendering context with transparent background?
6
Creating a text label with a transparent background using WinAPI
3
Transparent radio button control with themes using Win32
0
How do I alphablend a bitmap onto an owner-drawn button that overlaps other windows?
0
Dialog Background and Radio Button Transperancy
9
Common controls are not properly painted with WM_CTLCOLORSTATIC handler after I set Visual Styles on
3
Dialog box as a tab page has different background color from a tab control it belongs
1
How to display transparent png image files on a win32 button with color same as background color
1
What would make a static Picture Control display some pixels as transparent (bg color)