I am just a newbie in Xamarin, so I tried creating the simple Phoneword application available at Xamarin on-line guides. 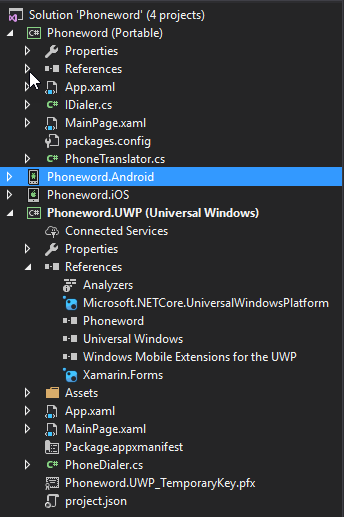 Now inside the first project an interface has been declared:

I now try to use this interface from within the UWP project:

Building the solution ends successfully. But when I try to Deploy the UWP project I get this error:

The type or namespace name 'IDialer' could not be found (are you missing a using directive or an assembly reference?)

Can anyone give me hint on what could be the source of this error?

There was one more error I was getting when I tried to deploy:

I closed the solution, exited Visual Studio started and loaded again and the first error disappeared. So, it seems, there is nothing wrong in consuming an interface, declared in the Code Sharing Project, from within the UWP Project.

The actual error I was getting was due to access rights restrictions of the folder were the project was being deployed.

You are not referencing the Phoneword in your PhoneDialer.cs file. Add this to the top:

I had a similar issue. The way to fix it is just to restart Visual Studio or reload the solution.

I had the same problem, Add this to your code at the top

and it should work fine The reason it was not working is because you didn't have a reference to it. For some reason the Assets that you import for that course do not have this reference in it.

Had the same problem. You need to right click on the Phoneword project in the Solution Explorer and click build to build it on it's own.

Then add the using statement for the Phoneword project to your PhoneDialer file.

The reference to IDialer then becomes available.

Not the answer you're looking for? Browse other questions tagged c# android xamarin uwp or ask your own question.

373
Error message 'Unable to load one or more of the requested types. Retrieve the LoaderExceptions property for more information.'
119
How to declare a friend assembly?
1374
Is there a way to get the source code from an APK file?
1577
Try-catch speeding up my code?
515
ReSharper "Cannot resolve symbol" even when project builds
10
Reference a .NETStandard 2.0 project from UWP project