We wanted to use a UITabBar in our iPhone app, but with one exception: we have a "sync" button which I wanted to rotate while the sync operation is happening.

Unfortunately this meant having to create a custom tab bar, but that's neither here nor there: the animation I implemented using Core Animation looks awesome. The problem is that while animating, it adversely affects the performance of everything else using animation on the screen: UITableView scrolling, MKMapView panning and pin drops, etc. My test device is an iPhone 4.

The problem seems to be how I've implemented the tab bar - I wanted to achieve something very similar to UITabBar, where you just supply a PNG for the icon and it uses the alpha channel to create the normal and highlighted states by masking a background image. I accomplished this with CALayer's mask property:

(Note: in the screenshot above you can see I've also added a shadow layer, but for simplicity I removed that from the code. I remove the shadow layer from the sync icon when it is animating, so it shouldn't be relevant.)

To animate, I simply rotate the mask layer:

So this all works great except for performance. You can see I've already tried tips that turned up on Google about rasterizing layers / making them opaque - hasn't helped.

I think I've identified the mask layer as being the culprit. When I take out the mask layer and just rotate the fgLayer instead of its mask, performance is wonderful, though it's certainly not the affect I'm going for: 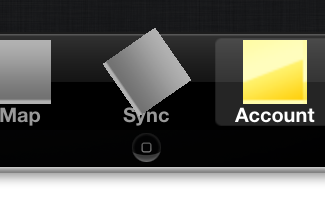 Performance is also just as bad as before if I rotate the fgLayer instead of the mask while the mask is applied.

So if having to recomposite the mask each frame of the animation is the slow down, are there any other techniques I can use to achieve a similar affect that will have better performance? Using a path instead of an image for the mask layer? Or am I going to have to drop down to OpenGL or something to get good performance?

UPDATE: further reinforcing the idea that the mask is the slowdown, my coworker suggested trying to rotate a CALayer with just the image as the contents -- so similar to my example above w/o a mask -- and performance was also good that way. So I can really only do a solid color like that (no gradient), but it may be a good interim solution. I'd still love to achieve rotating a mask with good performance though, so suggestions welcome :)

Why do you need to use a layer mask? Can't you just convert your mask layer to a sublayer? You would just need to make sure your image had the proper alpha and you would use it's CGImageRef as that layer's contents.

One other thing. I haven't figured out why yet, but I've also noticed performance issues when I apply shouldRasterize on each layer instead of just the top layer. You might see if removing the reference to setShouldRasterize:YES in your mask layer helps at all.

One approach would be to create a CAShapeLayer to use as your mask—you'd have a fair bit of work cut out for you making a version of your “sync” icon with Bézier paths, but shape layers incur a much lower performance cost per-transformation than bitmap ones. Unfortunately, you can't be sure that the rotation is where the performance issue is coming from—it could very well be the masking causing most of the lag, in which case you'll have done all that vectorizing for little benefit.

I think the best solution is to use UIImage's animation capabilities: create a filmstrip of every frame of the icon-rotation animation and simply display that animated UIImage in your tab bar. It's not the most elegant solution, but a number of animations across the system—the Mail and Notes trash-can “delete” icon and the various forms of activity indicator, for instance—are implemented the same way.

Not the answer you're looking for? Browse other questions tagged iphone objective-c ios core-animation calayer or ask your own question.

3
Image sequence animation with Core Animation
1
Why does the transform of the presentationLayer represent the state of the finished animation, while the animation is running?
75
UIView animation vs CALayers
134
Disabling implicit animations in -[CALayer setNeedsDisplayInRect:]
1
drawing image from CALayers
30
iOS Core Animation: CALayer bringSublayerToFront?
0
How to reactivate an applied CABasicAnimation or check if a CABasicAnimation is actually running right now?
4
SIGABRT message only with iOS5
944
How do I animate constraint changes?