I upgraded recently to the new Eclipse version (Oxygen). I downloaded the lombok.jar from the website and installed it. This is how the eclipse.ini looks like after installation:

I can use Lombok as seen here: 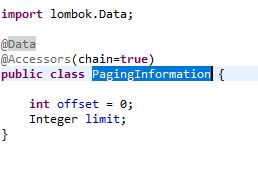 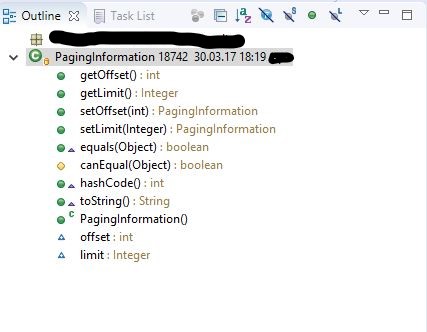 But when using the getters/setters and/or constructors in other classes I get the this errors:

Also these are my Eclipse and Lombok versions:

Anyone knows how I can fix it?

Note: Read the note in following image regarding -vm options If you start Eclipse with a custom -vm parameter, you'll need to add:

as parameter as well 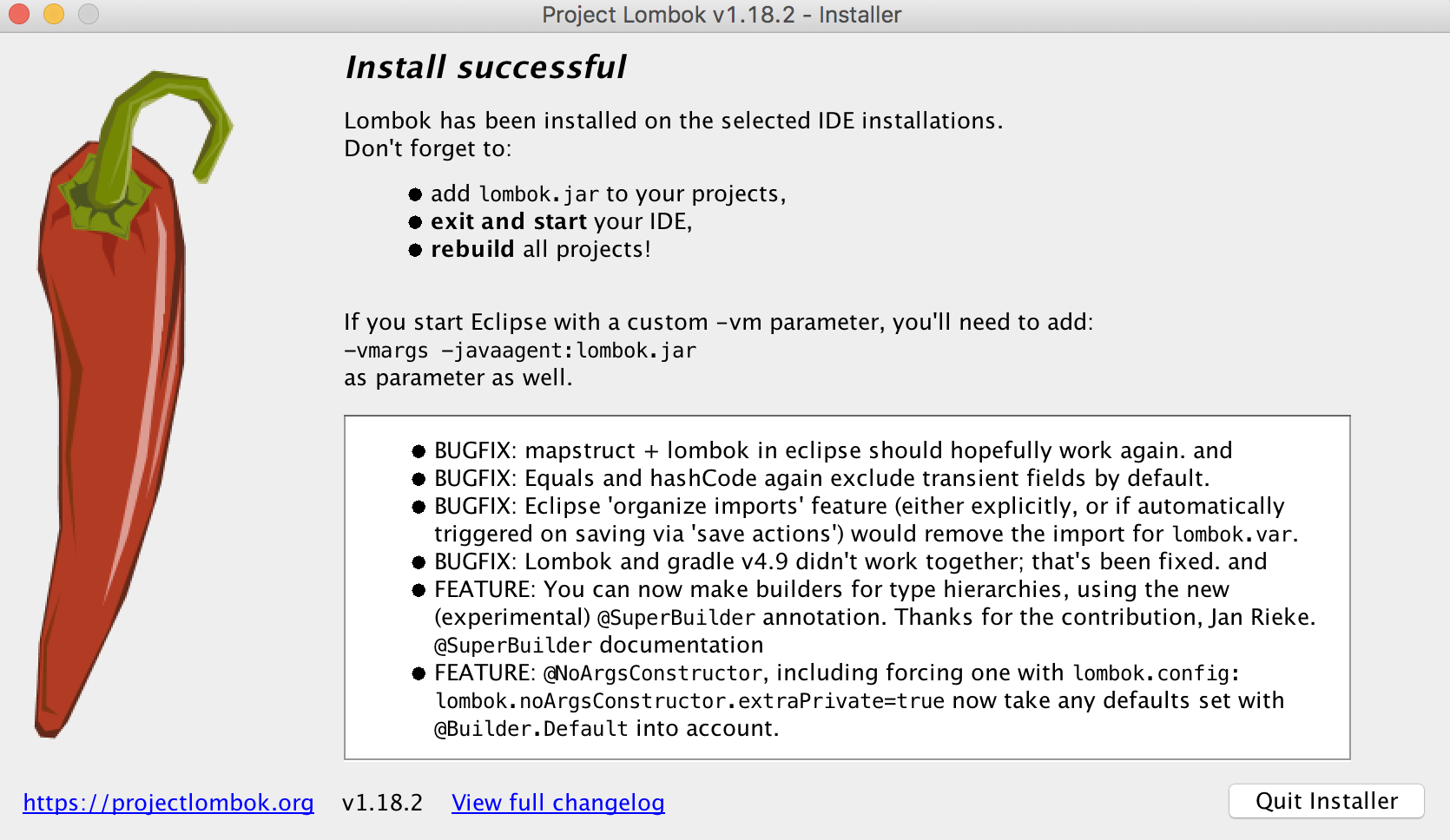 Lombok does not work for Eclipse Neon

I had exactly the same problem with Alex. My eclipse version is

I installed lombok 1.16.18, after checking it was already installed and also javaagent line was added to my eclipse.ini file.

Every thing was fine except that there are compilation errors where getter is called in the project. It's awkward but I fixed by :

Had problems with Eclipse Oxygen, Java 1.9 and Lombok (on Mac OSX - windows/linux should be similar).

This is what I had to do:

Thereafter check to see if the updates have made it in eclipse.ini:

There is only one line that is updated. That is a change from some of the earlier versions of lombok where a bootclasspath was also specified and / or the path to lombok.jar was relative. Now it is an absolute path.

Bring up eclipse and you would see Lombok in action.

And do not forget to use the same Lombok version in your maven or any other dependency management tool.

Edit 1: I also used a different version of Lombok in the maven POM from the one that is installed in eclipse and for the most part, things compiled but there were a few compile errors in eclipse. Of course, things compiled successfully on the command line with maven. So if you have project dependencies that force you to use different Lombok versions then be aware of such an eventuality. The crux is to have the same version installed in both eclipse and in your project's dependency management (maven etc.).

Do not use old versions of java.

What happens is that lombok puts the following line in your eclipse.ini:

The problem is that the shortcut created by the windows installation looks like this:

Fill in the "Start at" path and it will work:

For Linux/Ubuntu users who are launching Eclipse from a launcher (a .desktop file) that is locked to your launcher, and your Help --> About dialog doesn't show lombok is installed:

It seems this works due to some issue with applications 'lock to launcher', and it's the unlock/lock process that fixes it.

(Thanks to cardamon's comment here that pointed me to this solution)

I faced the same issue and struggled a lot to solve this issue. I was trying with lombok v1.18.14 which fails to setup on eclipse (as mentioned in changelog) so ensure you don't use it.

The below solution worked for me and it is simple to implement. This solution works for almost all eclipse versions.

To ensure Lombok is successfully installed, please follow below steps (after restarting eclipse) :

I had the same problem, however, the original development was done with lombok 1.16.10 and I had installed 1.16.18. When I downloaded and installed 1.16.10 everything worked. I probably needed to do a few cleans and rebuilds to get it to work with .18, but if you're in a hurry, try that.

Also had problems with lombok in eclipse oxygen.

And I refer to lombok by adding this to my eclipse.ini:

If restarting Eclipse doesn't help. You have to quit the application and make sure to kill all running java processes. That worked for me.

Quite a few solutions, none solved my problem.

My issue was running eclipse on a DCEVM JRE. Pointing Eclipse to a non-modified JVM resolved this problem.

Had similiar issue but really don't remember what helped me. Of course u can try restart Eclipse. Make sure you mentioned correct Eclipse path in lombok installation. That's the topic you can find other potential solutions: Cannot make Project Lombok work on Eclipse (Helios)

You can install lombok through command line very easily, ~/softwares/Eclipse.app/ path to your eclipse or sts app (this is on mac) but it will also work for different OS, and it will give you the successful output.

I tried all this but it didn't work for me. Lombok libraries were still not adding into my classpath.

I was using the latest spring-boot version

when I reduced this to following version which worked for me

If you have successfully installed Lombok and still facing the problem then right click on your project > maven > update project this should work.

follow below steps to fix lombok issue in eclipse

After this you will able to see these below lines in eclipse.ini file

Note - if any line missing after follow these steps then add into your eclipse.ini and enjoy ur work.

Same issue I have faced in eclipse. Installation was successful but I was seeing errors in my code. A simple maven update resolved this issue. In eclipse it is Alt+F5.

simplw way just download the lombok.jar open eclipse click with the right to project go to build path and add an external jar and import the jar restart the eclipse and everything is solve

and Lombok is not java version agnostic, source

So you need to chose compatible versions, for example

Hello I solved that problem simply editing the lombok dependency in the pom.xml

Not the answer you're looking for? Browse other questions tagged eclipse lombok or ask your own question.

1298
How can you speed up Eclipse?
1969
"Debug certificate expired" error in Eclipse Android plugins
4
Setting up Eclipse and Java JDK
2
Trouble to start eclipse ganymede
4
Why eclipse does not open when I change the max heap size?
7
unable to start eclipse under java 1.8
2
Eclipse Installer: can not initialize cryptographic mechanism
0
Eclipse is not opening in linux environment