I'm trying to upgrade to Selenium 3.40 + geckdriver 0.18.0 but I can't find a version of Firefox that runs 100%. I'm using x64 en-US versions of Firefox unless otherwise noted. They were downloaded from here.

Here's what I have found:

Is there a combination of selenium 3.4.0 + geckodriver + Firefox that works on .Net for you?

This Question have been surfacing out quite often for sometime now since we migrated from the legacy Firefox releases to Marionette based Mozilla Firefox releases (beginning with Firefox 48).

In general, each GeckoDriver release supports each version of Mozilla Firefox releases (beginning with Firefox 48) where the property marionette needs to be set to true (either by default or by configuring through an instance of DesiredCapabilities() Class and passing it as an argument while initializing the Web Browser)

If you are working with the legacy Firefox releases (till Firefox 47.x) GeckoDriver still works but you have to explicitly set the property marionette to false.

Recently, some dependency were announced between GeckoDriver, Selenium and Mozilla Releases. The GeckoDriver release notes clearly states all the major/minor New Feature Addition, Enhancements, Bug Fixes and Download Location separately in this link.

geckodriver v0.16.0 is only compatible with Selenium 3.4 and greater. 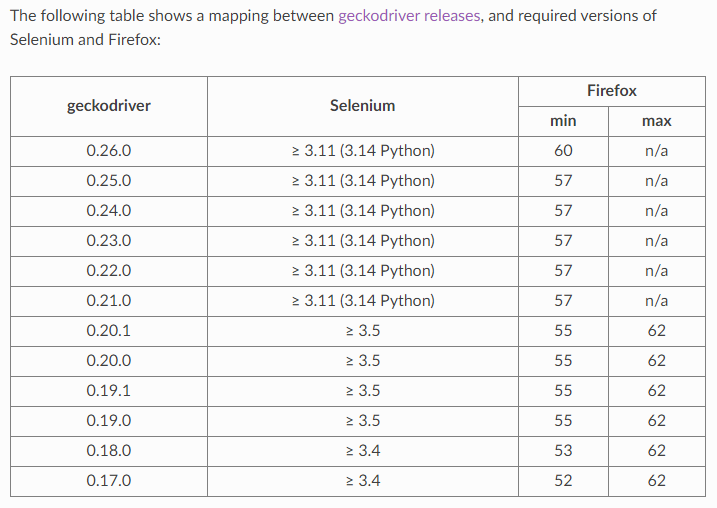 Found a workaround for the WebDriver close + Firefox crash problem. Do this:

Not the answer you're looking for? Browse other questions tagged selenium firefox selenium-webdriver geckodriver or ask your own question.