How to obtain the actual SNMPGet-able OID from the MIB file using Net-SNMP?

I noticed that in some cases, the actual OID has an extra .0 or .1 or .2 added to the MIB Name, however, this doesn't happen all the time. Using the very common SysName example. Net-SNMP's SNMPTranslate and MIB browsers will show the OID of SysName as ".1.3.6.1.2.1.1.5". 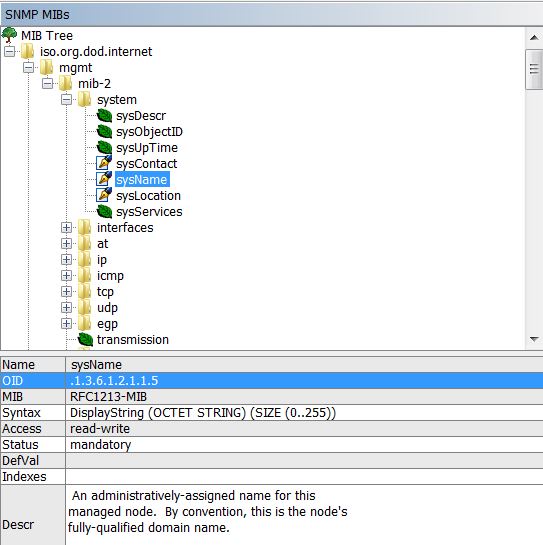 To add to the confusion, a trailing 0 or 1 isn't always required.

Managed objects, in SNMP, are of two types : scalar objects and tabular objects.

A managed object that always has a single instance is called a scalar object. Tabular objects, on the other hand, have multiple instances, such as the rows of a table. For example, the MIB II system group has seven "leaf" variables under it. Each of these objects is a scalar object. For example, the value of sysUpTime is the duration of time since re-initialization of a system's network management software (SNMP agent), measured in hundredths of a second. The OID of scalar objects ends with .0.

Tables in SNMP are two-dimensional objects defined as an ASN.1 type called SEQUENCE OF. Each element of the sequence is an entry (row) in the table, which itself is a sequence of scalar-valued objects. SNMP does not allow tables to be nested within tables.

For example, the MIB II interfaces group contains simply one tabular object, the ifTable, which contains one row for each of a network interfaces. Each row in the table is an instance of the object ifEntry. Each row contains instances of the scalar-valued leaf objects IfIndex, ifDescr etc. The leaf objects are called columnar objects since the instances of each such object constitute one column in the table. Although these objects have scalar-valued instances, they are not scalar objects because they can have multiple instances.

Not the answer you're looking for? Browse other questions tagged snmp net-snmp or ask your own question.

0
SNMP v3 with NET::SNMP working, but snmpwalk/snmpget not?
1
NET-SNMP-TUTORIAL-MIB snmpget dosnt work
0
c++ How to write value to OID with snmp-net
11
How to get OIDs from a MIB file?
1
How to get and set OID value in custom SNMP MIB
1
How should I deal with these SNMP mib file parsing errors?
1
OID addressing with net-snmp
0
Trailing numbers and dots in an OID not defined in a MIB
0
net-snmp unable to translate numeric OID values to textual MIB name