How to compare images and determine which has more content?

Goal: I want to grab the best frame from an animated GIF and use it as a static preview image. I believe the best frame is one that shows the most content - not necessarily the first or last frame.

Take this GIF for example:

This is the first frame:

It's clear that frame 28th represents the entire GIF well.

How could I programmatically determine if one frame has more pixel/content over another? Any thoughts, ideas, packages/modules, or articles that you can point me to would be greatly appreciated.

One straightforward way this could be accomplished would be to estimate the entropy of each image and choose the frame with maximal entropy.

In information theory, entropy can be thought of as the "randomness" of the image. An image of a single color is very predictable, the flatter the distribution, the more random. This is highly related to the compression method described by Arthur-R as entropy is the lower bound on how much data can be losslessly compressed.

Where H is entropy, E is the expected value, and p(x) is the probability that any given pixel takes the value x.

Programmatically H can be estimated by simply computing -p(x)*log(p(x)) for each value p(x) in the histogram and then adding them together.

Plot of entropy vs. frame number for your example. 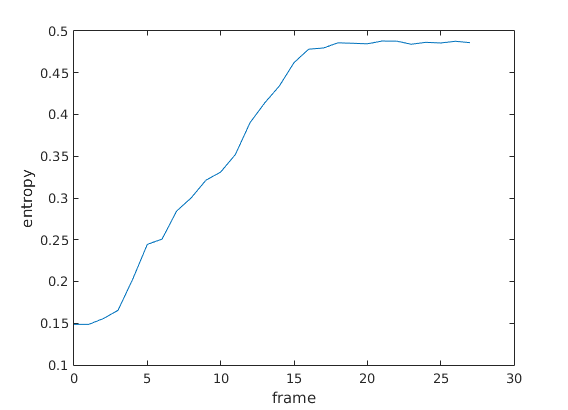 with frame 21 (the 22nd frame) having the highest entropy. 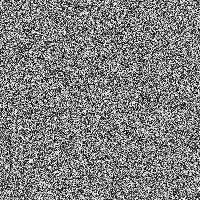 I don't know ruby but it looks like one of the answers to this question refers to a package for computing entropy of an image.

File.size() should be roughly proportional to entropy.

As an aside, if you check the size of the 200x200 noise image on disk you will see that the file is 40,345 bytes even after compression, but the uncompressed data is only 40,000 bytes. Information theory tells us that no compression scheme can ever losslessly compress such images on average.

There are a couple ways I might go about this. My first thought (this may not be the most practical solution, but it seems theoretically interesting!) would be to try losslessly compressing each frame, and in theory, the frame with the least repeatable content (and thus the most unique content) would have the largest size, so you could then compare the size in bytes/bits of each compressed frame. The accuracy of this solution would probably be highly dependent on the photo passed in.

I'm thinking about some more optimized/ sample based solutions, and will edit my response to include them a little later, if performance is a concern for you.

I think that you can choose an API such as Restful Web Service for do that because without it that's so hard. For example,these are some famous API's:

Not the answer you're looking for? Browse other questions tagged node.js ruby image image-processing or ask your own question.

5
Get, or calculate the entropy of an image with Ruby and imagemagick

161
Algorithm to compare two images
2035
How to lazy load images in ListView in Android
216
Simple and fast method to compare images for similarity
1520
What is the purpose of Node.js module.exports and how do you use it?
1912
How can I update NodeJS and NPM to the next versions?
321
What does "WARN Could not determine content-length of response body." mean and how to I get rid of it?
456
How to determine a user's IP address in node
909
How to display Base64 images in HTML
1555
How do I completely uninstall Node.js, and reinstall from beginning (Mac OS X)