Failed to resolve: com.google.android.gms:play-services in IntelliJ Idea with gradle

which looks pretty straightforward. I just added those lines to my build.gradle in the corresponding section, so things look now like:

Then I try to sync my gradle project in Idea just to get that "Failed to resolve" error.

Well, the setup guide also says "Be sure you update this version number each time Google Play services is updated", but the problem is that it seems nearly impossible to find that version number: my Google Play Services SDK version according to the Android SDK manager is "43", and so far I have been unable to correlate such "11.2.0" or whatever typical version string with the "43" version number. Not that the setup guide says nothing about that.

Anyway, I have tried a lot of things from the plethora of questions related to this to no avail. Specifically, I have to point out that I do have my Android SDK properly updated and I'm sure it is the one it's being used by Idea (I've already triple-checked this...): 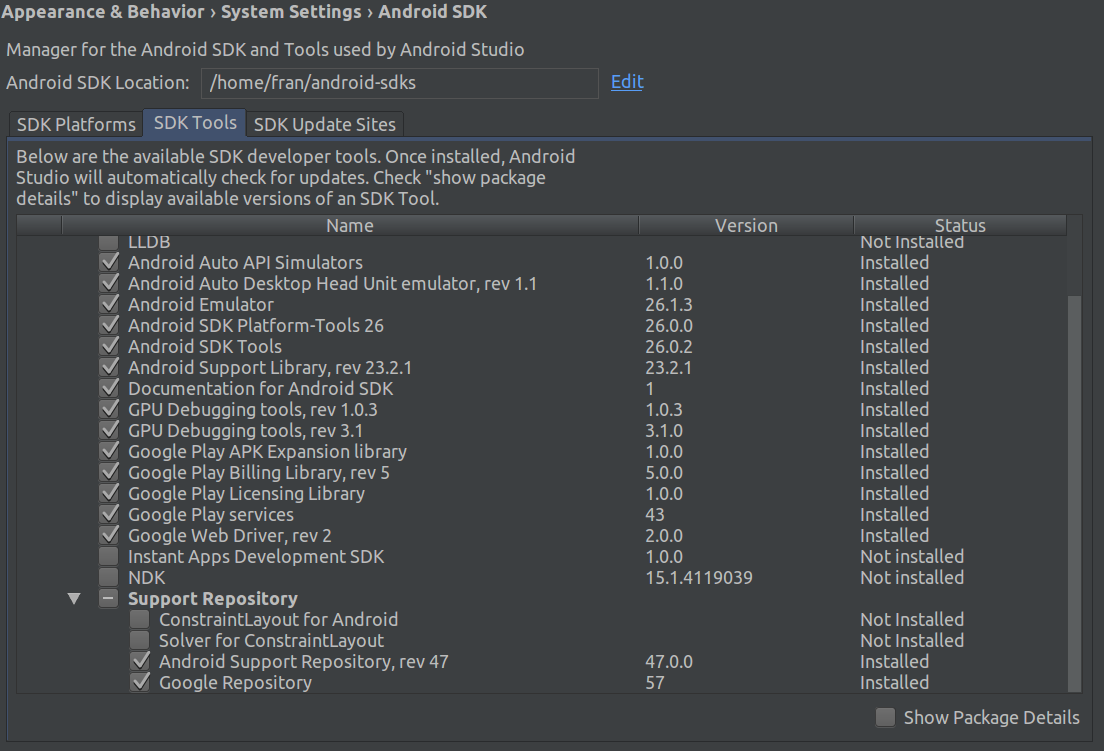 I'm using the API level 26, but anyway the other defines do use the very same directory for the Android SDK. Moreover, I do NOT have any other android SDK installed at all in this laptop, so there's no question about Idea being using that one and that one only.

Any ideas are more than welcome.

I had the issue when I put jcenter() before google() in project level build.gradle. When I changed the order and put google() before jcenter() in build.gradle the problem disappeared

Here is my final build.gradle

So, after struggling with all the available scattered documentation, I reached this document by pure chance (I guess it is not indexed high enough by Google): https://developers.google.com/android/guides/releases

I quote from there:

Now, even when that shouldn't necessarily mean that they are not available with the downloaded SDK anymore, it seems that this is actually the case.

Anyway, adding google() to my build.gradle didn't work (not found, undefined, or whatever...), so I used a different approach that I found in this document referenced from the previous one:

I modified my build.gradle file adding that line to allprojects/repositories, as in:

And then also in the android section in the same build.gradle file:

Those two lines were enough to make Gradle sync without problems. I didn't need to add any plugins apart from the ones that are already added in my libGDX project by default.

After that, I got a few different errors, but none about Gradle or dependencies. In a brief, JFTR:

First, I had a minSdkVersion of 8. Solved by raising it to 14. I think I could live without supporting all those devices below 14.

Second, I had problems with the dex upper limit of references. I've never faced this problem before, but maybe you've already noticed the solution I used: instead of compiling the whole 'com.google.android.gms:play-services' I used only 'com.google.android.gms:play-services-ads' that's the API I'm actually interested right now. For those other particular cases where a solution like this may not be useful, this document could provide some better insight: https://developer.android.com/studio/build/multidex.html

And that's it. As of now, everything builds and my game does finally shows those Admob banners.

I've spent hours with this, thought, which makes me wonder if all these building automation systems we are using lately are worth the extra load they add.

I mean, the first time I had to add Admob to an app five years ago or so, I just had to download a .jar file and put it on a directory on my project. It was pretty obvious and the whole process, from googling "how to setup Admob in my android project" to have my app showing an Admob banner took me just a few minutes. I'm gonna leave it here, since this is not the place for such kind of debate.

Nonetheless, I hope my own experience is useful for someone else further.

Add this to your project-level build.gradle file:

It worked for me

I tried solving this problem for hours after I haven't used Android Studio some time and wasn't aware of the updates.

It is important that google() is the first item that stands in repositories like this:

Somehow google() was the second item after jcenter(), so everything was messed up and didn't work. Maybe this helps someone.

After update sync your project.

A more up to date answer:

And don't forget to update gradle to 4.1+ (in gradle-wrapper.properties):

At the latest Google Play Services 15.0.0, it occurs this error when you include entire play service like this

Instead, you must specific the detail service like Google Drive

I have found following solution to replace following code

It's work fine for me

Reason might be I was using maps dependency of version 17.0.0 & location version as 17.0.1.It might have thrown error.So,try to maintain consistency in version numbers.

Check you gradle settings, it may be set to Offline Work

I got this error too but for a different reason. It turns out I had made a typo when I tried to specify the version number as a variable:

I had defined the variable playServices in gradle.properties in my project's root directory:

That fixed the problem for me.

I had that problem. And I found this solve. In Android Studio, Open File menu, and go to Project Structure, In Module app, go to dependencies tab and you can add 'com.google.android.gms:play-services:x.x.x' by clicking on + button.

if cannot find your needs you should update your sdk from below way:

I had the same problem and it resolved by disabling Gradle's offline mode although I could not remember when I did disable it!

How to disable Gradle 'offline mode' in android studio? [duplicate]

Not the answer you're looking for? Browse other questions tagged java android intellij-idea gradle libgdx or ask your own question.