How can I use SensorManager.getOrientation for tilt controls like "My Paper Plane"?

The Android game My Paper Plane is a great example of how to implement tilt controls, but I've been struggling to understand how I can do something similar.

I have the following example that uses getOrientation() from the SensorManager. The whole thing is on pastebin here. It just prints the orientation values to text fields. Here is the most relevant snippet:

The problem is that the values this spits out look like nonsense, or at least there's no way to isolate which type of motion the user performed. I've drawn a diagram to indicate the 2 types of motion that I'd like to detect - 1. "tilt" for pitch and 2. "rotate" for roll/steering: 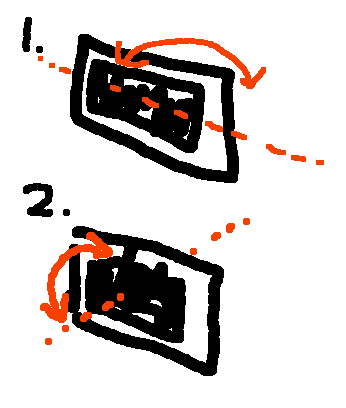 (That's an isometric-ish view of a phone in landscape mode, of course)

When I tilt the phone forwards and backwards along its long axis - shown by 1. - I expected only 1 of the values to change much, but all of them seem to change drastically. Similarly, if I rotate the phone about an imaginary line that comes out of the screen - shown in 2. - I'd hope that only the roll value changes, but all the values change a lot.

The problem is when I calibrate my game - which means recording the current values of the angles x, y and z - I later don't know how to interpret incoming updated angles to say "ok, looks like you have tilted the phone and you want to roll 3 degrees left". It's more like "ok, you've moved the phone and you're a-tiltin' and a-rollin' at the same time", even if the intent was only a roll. Make sense?

Any ideas? I've tried using remapCoordinateSystem to see if changing the axis has any effect. No joy. I think I'm missing something fundamental with this :-(

You mixed the accelerator and megnetic sensor arrays. The code should be:

Not the answer you're looking for? Browse other questions tagged android screen-orientation tilt or ask your own question.

2816
How can I save an activity state using the save instance state?
2646
How can I fix 'android.os.NetworkOnMainThreadException'?
36
How to measure the tilt of the phone in XY plane using accelerometer in Android
3919
Proper use cases for Android UserManager.isUserAGoat()?
1
gimbal lock, can't solve by quaternion
4
Android sensor yaw, pitch & roll
0
Android Tilt issue with Accelerometer and Magnetometer
3
Android: Algorithms for SensorManager.getRotationMatrix and SensorManager.getOrientation()