Git bash Error: Could not fork child process: There are no available terminals (-1)

I have had up to 8 git bash terminals running at the same time before.

Currently I have only 2 up.

I have not seen this error before and I am not understanding what is causing it.

Any help would be appreciated! 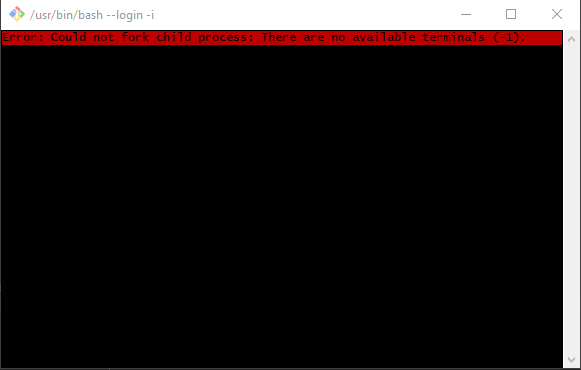 Found a similar issue and solution in google groups

I opened a windows command prompt and ran the command

It looks as though the ssh connections I had made in my git bash shells weren't being closed when those windows were closed and were hanging the available git bash shell windows.

Everything appears to be working again after this. It may not have directly been an issue of orphan processes, but this worked for at least for me.

Additional note: you can also kill other processes, for example like:

In my case, it was related with the use of VS code. Previously I have opened VS code using a git bash terminal and executing

then closing the terminal.

The problem is solved by closing all the VS code windows opened.

When you have any editor or IDE configure to open a terminal as git bash, then when the IDE/IDE is running, the git bash will spin up bash from "C:\Windows\System32\bash.exe" and any other attempt to open bash from a separate window is likely to crash.

I see the problem on windows in git bash when I kill my git bash console without using exit. I found killing ssh-agent.exe task from windows task manager to fix the problem.

I address this with a workaround:

It should be ok now.

To make life easier (this problems happens quite often) create a file called fixbash.bat in home directory and paste this:

When problem occurs just open cmd and type fixbash.bat to fix a problem.

Just paste the taskkill command into your cmd if you don't want to create a script.

(The other answers did not work for me. (I didn't try reinstalling. Restarting is probably faster.))

Open task manager and kill process with name bash, this worked for me.

This happens when you exit git bash without terminating existing process. Just try and kill those processes that you started from git bash. I was running node process inside git bash, so I killed all node processes Steps to kill

For me (or anyone running protractor, which may spin up a standalone Selenium/WebDriver server), I needed to taskkill the specific webdriver which was running my tests.

So just a different argument: or your chromedriver version may vary

This problem got worse after protractor quit without closing the automated /test-driven browser, (due to a separate issue I don't yet understand.) Naturally many chromedriver tasks remain running, that's why kill them.

finally figured out what was causing this.

if we use code like this (explicitly or implicitly) i.e. in .bashrc file

it spawns a new process.

if you don't exit it and just close the window, that process is still running. so each new bash opened just keeps adding new ones w/out disposing old ones.

when done with a bash window, simply hit ctrl+d or type exit to kill the agent process, and you should not run out of forks.

In my Case I need to kill Git bash in Windows. So opened Command Prompt and ran below command

It will list down all running tasks, then need to kill bash.exe task using below command

Seems to be an issue with the processes launched from the git bash indeed, like @mamacdon suggested in his comment on the top answer by @Scott Newson.

For me, the issue appeared if I launched a vscode from the bash with code, and if this instance of vscode launched an integrated git terminal while the original bash was still running.

Doesn't matter whether that terminal was launched at the start or later, as long as it was while the original bash was still running.

Didn't happen when the bash was closed before the integrated terminal was opened. Didn't differentiate between exit and closing bash via windows. Didn't happen with another older bash window still running.

The way to deal with it was for me to close the terminals in vscode with exit or 'Kill Terminal' (be careful not to mix that up with 'close pane'), or of course, closing vscode itself.

If you are using Visual Studio Code and you can't find ssh-agent.exe or can't taskkill it and after opening Git Bash you get that error, just go to your VSCode open Terminal>New Terminal and just press the trashbin icon the (Kill Terminal). e.g (1:bash) if you got multiple then just kill them all and you should be good.

I tried to kill all my git terminals in task manager solves the problem. This works for me too. good luck.

Im my case, the solution was to close Visual Studio Code -where I had console running too without noticing-

After closing it all back to normal. Hope this helps someone.

On a more recent version of git for windows, the process to kill in task manager was "GitExtensions.exe". Killed that and the terminals restarted with no issues.

Open Task manager, find bash.exe process and kill it. Helped in my case.

In my case I had visual studio code running and closing it resolved the issue.

Windows 10 this worked for me:

3) If there was an Error: The process "ssh-agent.exe" not found. then:

4) Find and kill every process with words like "bash" or "git" (This may be a dangerous solution, but once you will find the process name, next time you will know.)

For windows, in task-manager kill sh.exe.

In my case, I had a stray abd.exe that was still open in task manager. Killing it fixed the issue.

In my case the problem was the file [git_install_dir]/etc/nsswitch.conf

I previously followed the instructions given here: https://cygwin.com/faq.html#faq.using.startup-slow. But this caused the "Could not fork" error instead. My wrong nsswitch.conf file was:

So I restored the file and problem solved. Now my [git_install_dir]/etc/nsswitch.conf is:

if you have another terminal session of VS code opened,just close it and try again, it will work fine.

This problem started for me when I edited my bash_profile and restarted git bash.

The problem was resolved after I closed my terminal session in VS Code. Everything worked as expected after that.

Not the answer you're looking for? Browse other questions tagged git terminal git-bash or ask your own question.

3725
Undoing a git rebase
5825
Move the most recent commit(s) to a new branch with Git
1907
Throw away local commits in Git
1925
How can I git stash a specific file?
2446
What is the best (and safest) way to merge a Git branch into master?
914
Git: cannot checkout branch - error: pathspec '...' did not match any file(s) known to git
3318
How to get the current branch name in Git?
1736
How do I commit case-sensitive only filename changes in Git?
2806
Git is not working after macOS Update (xcrun: error: invalid active developer path (/Library/Developer/CommandLineTools)