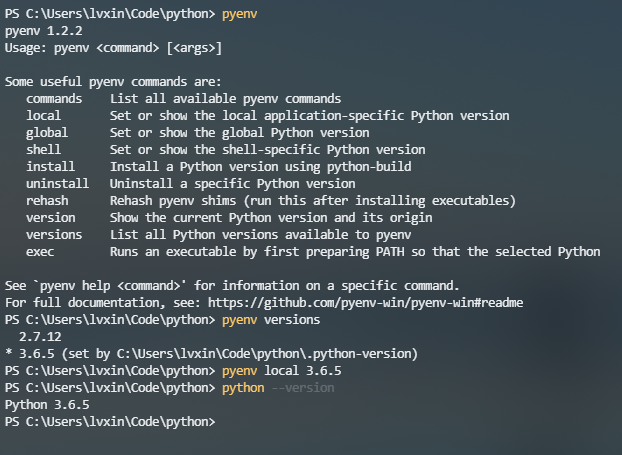 This is a simple and elegant solution to easily run 2 or more different versions of python without using scripts in Windows. Whatever the version of python, it will start from the Command prompt.

I have python versions 3.6.6 and 3.9. The Environment Variable paths are normal and were automatically added when each version of python was installed.

It's best to install python using the "all users" option. This way the python will simply install to:

Save and exit Environment Variables.

Open a new Command Prompt terminal window. To run one or the other version of python, type:

More versions of python can easily be added by repeating the same as shown above. Elegant and simple. Done.

31
How to run different python versions in cmd
-1
how to run two django projects with different python versions
-2
Python version conflict
-2
Python interpreter is not in a environment, but conda reports it is in a environment
1
Is it possible to have both Python3.6 and Python3.8 versions installed at same time in windows machine
0
How to install two versions of python in windows 10?
0
Upgrading from Python 2.7 to 3.6 - Completely uninstall 2.7 or run side by side?
-3
I have older version of python but i need newer version how to install new version without removing older?
0
Can I install python 3.6.1 and 3.6.3 together?
124
How to downgrade python from 3.7 to 3.6
See more linked questions

1234
How can I develop for iPhone using a Windows development machine?
6096
How do I merge two dictionaries in a single expression (take union of dictionaries)?
6563
What are metaclasses in Python?
5066
How can I safely create a nested directory?
7137
Does Python have a ternary conditional operator?
3569
Using global variables in a function
2991
How to make function decorators and chain them together?
1562
Proper way to declare custom exceptions in modern Python?
641
Dealing with multiple Python versions and PIP?
3197
How to iterate over rows in a DataFrame in Pandas