I have a form that is centered according to the screen position that I resize by fontsize when loading. After resizing the location remains the same as it was before resizing so the form is no longer in the center, like I would like.

Let me draw you a sketch: 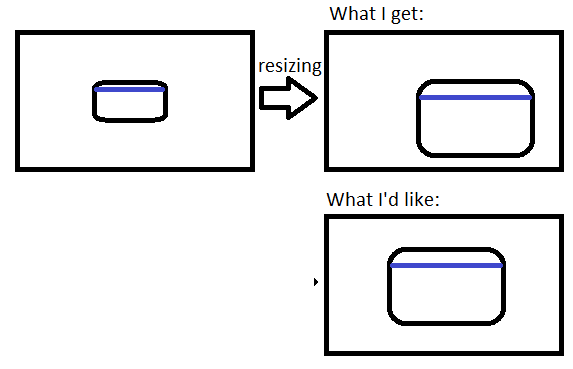 again after resizing (this is, I believe, the part of the code that centers the form in the beginning). It didn't work. I've also found some similar issues like this: "Keeping winform control centered after window resize " but they always only deal with centring a control, not the form itself.

Add method for ResizeEnd event. In method, when ResizeEnd is fired, get current screen size (on multiple monitors, screen that contains current form) and then calculate form's position. Take a look at this example

Not the answer you're looking for? Browse other questions tagged c# forms winforms centering or ask your own question.

4232
How to horizontally center a <div>?
1345
How to vertically center a div for all browsers?
901
How to prevent buttons from submitting forms
107
How do you automatically resize columns in a DataGridView control AND allow the user to resize the columns on that same grid?
31
Keeping winform control centered after window resize
0
keeping relative position of pictureBox when resizing form
650
How to center a “position: absolute” element
1
Why do the lines not cross the same part of the image when the form is resized?