What's wrong with my implementation of Neural Networks? 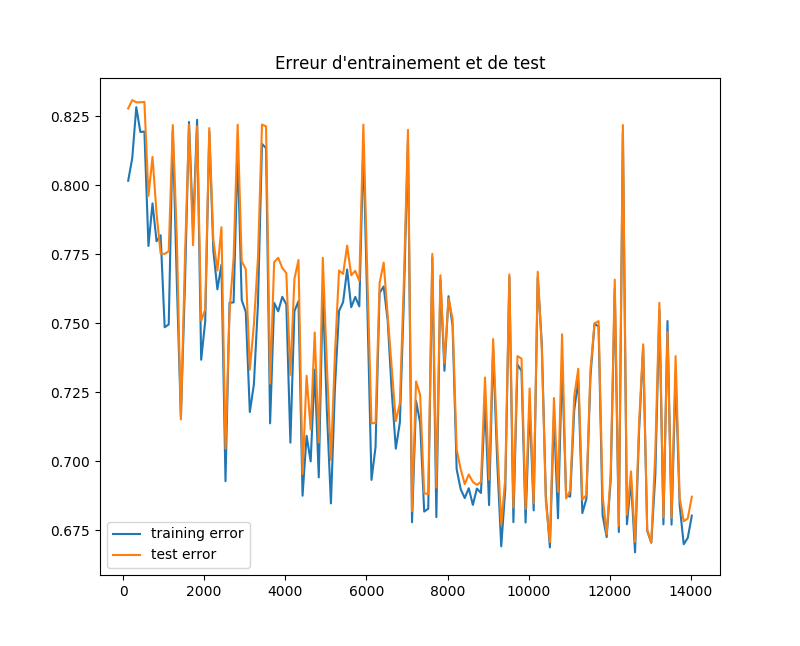 I want to plot the learning error curve of a neural net with respect to the number of training examples. Here is the code :

However, I get a very strange result, with curves fluctuating, the training error very close to the testing error which does not appear to be normal. Where is the mistake? I can't understand why there are so many ups and downs and why the training error does not increase, as it would be expected to.Any help would be appreciated !

EDIT : the dataset I am using is https://archive.ics.uci.edu/ml/datasets/Chess+%28King-Rook+vs.+King%29 where I got rid of the classes having less than 1000 instances. I manually re-encoded the litteral data.

The neural network minimizes a loss function, and in the case of tanh activiations, I assume you are using a modified version of the cross entropy loss. If you were to plot the loss over time, you would see a more monotonically decreasing error function like you expect. (Not actually monotonic because neural networks are non-convex, but that's beside the point.)

The performance metric that you are measuring is the percent accuracy, which is different from the loss. Why are these different? The loss function tells us how much error we have in a differentiable way (which is important for fast optimization methods). The accuracy metric tells us how well we predict, which is useful for application of the neural network.

Because you are plotting the performance of a related metric, you can expect that the plot will look similar to that of your optimized metric. However because they are not the same, you may be introducing some unaccounted-for variance in your plot (as evidenced by the plot you posted).

There are a couple of ways to fix this.

Don't expect the accuracy plot to always be smooth and monotonically decreasing, it won't be.

Now that you've added your dataset, I see a few other things that may be causing the issues that you're seeing.

The dataset defines the rank and file (row and column) of several chess pieces. These are input as an integer from 1 to 6. However is 2 really 1 better than 1? Is 6 really 4 better than 2? I don't think this is the case in terms of chess position.

Imagine I am building a classifier that takes money as an input. Is there some amount of information being portrayed by the magnitude of my values? Yes, $1 is quite different from $100; and we can tell that there is a relationship based on the magnitude.

For a chess game, does row 1 mean something different than row 8? Not at all, in fact these dimensions are symmetrical! Using a bias unit in your network can help account for the symmetry by "rescaling" your inputs to be effectively from [-3, 4] which is now centered(ish) around 0.

I think, however, you would get the most mileage out of tile-coding or one-hot encoding each of your features. Don't allow the network to rely on the information contained in the magnitude of each feature, as that may be causing the network to work its way into bad local optima.

In addition to the previous answers you should also have in mind, that you might have to tweak the learning rate (by setting learning_rate = value in the initializer) of the network. If you choose the rate to big, you will jump from on local minimum to another or circle around these points, but won't actually converge (see the image below, taken from here). 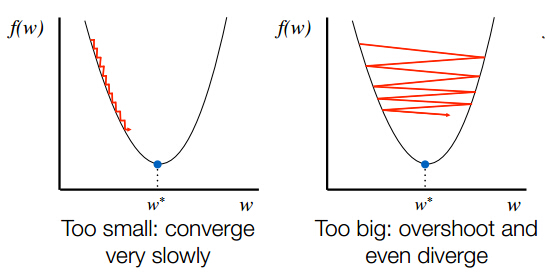 Furthermore, please also plot the loss and not just the accuracy of your network. This will give you better insights about it.

Also, keep in mind, that you have to use a lot of training and test data to get a more or less "smooth" curve, or even a representative curve; if you are using just a few (maybe a few hundred) data points, the resulting metrics will not actually be very accurate, as they contain a lot of stochastic things. To solve this error you should not train the network with the same examples every time, but rather change the orders of your training data, and maybe split it up on different mini batches. I am very confident, that you can solve or even reduce your problem by trying to mind these aspects and to implement them.

Depending on your kind of problem, you should change the activation function to something different than the tanh function. Performing a classification, a OneHotEncoder might also be useful (if your data is not already one hot encoded); the sklearn framework is offering an implementation of this, too.

If you would like a fair comparison of the effect of the number of training sample on the accuracy, I suggest to randomly pick n_samples from your training set instead of adding 100 samples to the previous batch. You would also repeat the fit N_repeat times for each n_samples value.

When you use the fit function, you restart the optimization from scratch. If you would like to see the improvement on your optimization when adding a few sample to the same previously trained network, you can use the option warm_start=True

When set to True, reuse the solution of the previous call to fit as initialization, otherwise, just erase the previous solution.

5
How to implement mini-batch gradient descent in python?

1695
What's the canonical way to check for type in Python?
2991
How do I change the size of figures drawn with Matplotlib?
2568
How to upgrade all Python packages with pip
9
ValueError while using linear SVM of scikit-learn python
0
ValueError: Expected 2D array, got 1D array instead insists after converting 1D array to 2D