Order Of Execution of the SQL query

This is the function which is called from the above query.

SQL has no order of execution. Is a declarative language. The optimizer is free to choose any order it feels appropriate to produce the best execution time. Given any SQL query, is basically impossible to anybody to pretend it knows the execution order. If you add detailed information about the schema involved (exact tables and indexes definition) and the estimated cardinalities (size of data and selectivity of keys) then one can take a guess at the probable execution order.

A completely different thing though is how do queries, subqueries and expressions project themselves into 'validity'. For instance if you have an aliased expression in the SELECT projection list, can you use the alias in the WHERE clause? Like this:

Is the use of c alias valid in the where clause? The answer is NO. Queries form a syntax tree, and a lower branch of the tree cannot be reference something defined higher in the tree. This is not necessarily an order of 'execution', is more of a syntax parsing issue. It is equivalent to writing this code in C#:

Unfortunately, unlike the well known rules of C/C# language parsing, the SQL rules of how the query tree is built are somehow esoteric. There is a brief mention of them in Single SQL Statement Processing but a detailed discussion of how they are created, and what order is valid and what not, I don't know of any source. I'm not saying there aren't good sources, I'm sure some of the good SQL books out there cover this topic.

Note that the syntax tree order does not match the visual order of the SQL text. For example the ORDER BY clause is usually the last in the SQL text, but as a syntax tree it sits above everything else (it sorts the output of the SELECT, so it sits above the SELECTed columns so to speak) and as such is is valid to reference the c alias:

Actually there is this: Logical Processing Order of the SELECT statement

The following steps show the logical processing order, or binding order, for a SELECT statement. This order determines when the objects defined in one step are made available to the clauses in subsequent steps. For example, if the query processor can bind to (access) the tables or views defined in the FROM clause, these objects and their columns are made available to all subsequent steps. Conversely, because the SELECT clause is step 8, any column aliases or derived columns defined in that clause cannot be referenced by preceding clauses. However, they can be referenced by subsequent clauses such as the ORDER BY clause. Note that the actual physical execution of the statement is determined by the query processor and the order may vary from this list.

Queries are generally processed in the follow order (SQL Server). I have no idea if other RDBMS's do it this way.

SQL is a declarative language, meaning that it tells the SQL engine what to do, not how. This is in contrast to an imperative language such as C, in which how to do something is clearly laid out.

This means that not all statements will execute as expected. Of particular note are boolean expressions, which may not evaluate from left-to-right as written. For example, the following code is not guaranteed to execute without a divide by zero error:

The reason for this is the query optimizer chooses the best (most efficient) way to execute a statement. This means that, for example, a value may be loaded and filtered before a transforming predicate is applied, causing an error. See the second link above for an example

SQL query is not imperative but declarative, so you have no idea which the statement is executed first, but since SQL is evaluated by SQL query engines, most of the SQL engines follows similar process to obtain the results. You may have to understand how the query engine works internally to understand some SQL execution behavior.

Julia Evens has a great post explaining this, it is worth to check it out: 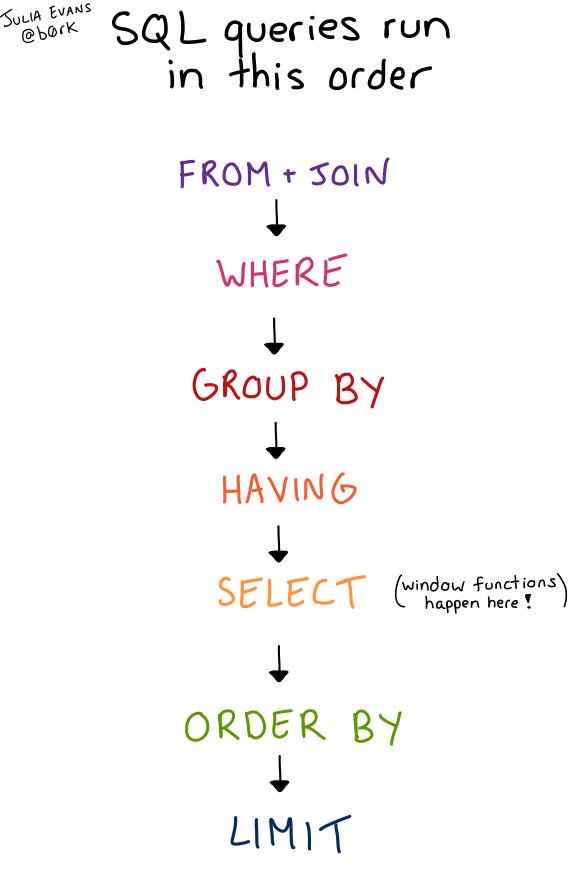 "Order of execution" is probably a bad mental model for SQL queries. Its hard to actually write a single query that would actually depend on order of execution (this is a good thing). Instead you should think of all join and where clauses happening simultaneously (almost like a template)

That said you could run display the Execution Plans which should give you insight into it.

However since its's not clear why you want to know the order of execution, I'm guessing your trying to get a mental model for this query so you can fix it in some way. This is how I would "translate" your query, although I've done well with this kind of analysis there's some grey area with how precise it is.

FROM AND WHERE CLAUSE

So a couple of notes here. You're not ordering by anything when you select TOP. You should probably have na order by there. You could also just as easily put that in your from clause e.g.

There is a logical order to evaluation of the query text, but the database engine can choose what order execute the query components based upon what is most optimal. The logical text parsing ordering is listed below. That is, for example, why you can't use an alias from SELECT clause in a WHERE clause. As far as the query parsing process is concerned, the alias doesn't exist yet.

See the Microsoft documentation (see "Logical Processing Order of the SELECT statement") for more information on this.

3
Does inner join order and where as an impact on performance
0
What is the order of execution of “SELECT” To “ORDER BY”?
0
Order of JOIN and WHERE
30
Execution order of WHEN clauses in a CASE statement
9
Why can't I use column aliases in the next SELECT expression?
10
What's the execute order of the different parts of a SQL select statement?
7
JOIN statement on an alias - SQL Server
1
Understanding why my CAST to INT is not working
2
multi-table query when there is no record in one table
2
Execution order of aggregate function in sql
See more linked questions

1629
How do I perform an IF…THEN in an SQL SELECT?
2974
Add a column with a default value to an existing table in SQL Server
1946
How to return only the Date from a SQL Server DateTime datatype
1977
How to check if a column exists in a SQL Server table?
1262
Check if table exists in SQL Server
2109
How to concatenate text from multiple rows into a single text string in SQL server?
1769
LEFT JOIN vs. LEFT OUTER JOIN in SQL Server
3957
How do I UPDATE from a SELECT in SQL Server?
1480
How can I delete using INNER JOIN with SQL Server?